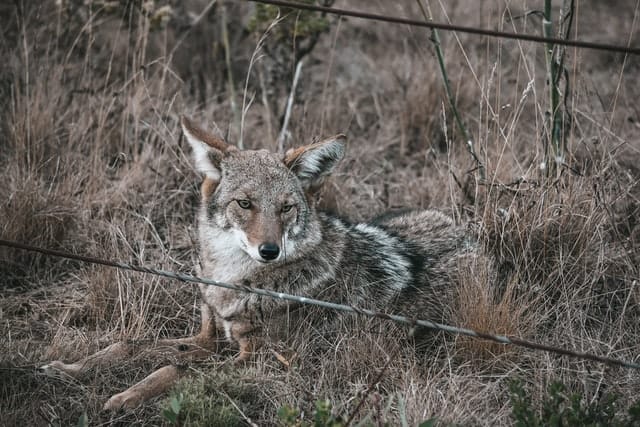 Coyotes are considered nocturnal, but in some places, they can be found awake during the daytime. Coyotes are often awoken by a loud noise while sleeping in their chosen rest area.

The chosen sleeping area is not a permanent spot for the coyote. Coyotes often change their sleeping location every few days, if not daily. Changing den or rest locations is for the safety of the pack. Since coyotes remain in the same territory, they may return to the same sleeping location eventually.

The environment is a major influence on the coyote when choosing a sleeping location. Coyotes rely on a safe place that keeps them protected through the night. The adaptive canine can find a place to sleep no matter where they go, from the wintry cold to flashy cities.

Are Coyotes Nocturnal? When Do They Sleep?

Coyotes are mostly nocturnal canines that adapt sleep habits based on the predators and prey in their environment. Many coyotes sleep during the daytime in covered areas. However, it is not uncommon to see a coyote during the daytime, depending on where you live.

In some cases, the medium-sized carnivore is not nocturnal. When a coyote is not nocturnal, this is because they have altered their sleep schedule. Environmental impacts are the main contributor in a coyote changing their sleep patterns. So, if there are many people around, you may see them walking around the city.

What Time Will Coyotes Go To Sleep?

The time coyotes go to sleep varies based on their sleep schedule. With most schedules being nocturnal, coyotes will sleep during the day after hunting around dusk.

After hunting, coyotes will expel their energy and then retire for sleep around dawn. Coyotes sleep the rest of the day until they are interrupted or need to come out from their sleeping area for a stretch.

Coyotes may alter their sleep schedule to accommodate their surroundings. If they have adapted to humans around them, they may go to sleep at night. Again, all coyotes have different sleeping schedules.

How Many Hours Do Coyotes Sleep Per Day?

The coyote is a close relative of the dog, so do not be surprised if you observe a coyote sleep for 12 hours a day or more.

Do Coyotes Nap? What Do Their Sleeping Patterns Look Like?

Coyotes have irregular sleeping patterns, which often make it appear like they are napping rather than sleeping. They constantly wake up when they hear the slightest noise because of their impeccable hearing. The coyote’s excellent hearing makes it difficult for this wild canine to sleep soundly through the day.

When coyotes wake up during the day, they often do so because of discomfort with their surroundings. The discomfort causes them to move around, yawn, and sometimes whine.

Sleeping outside a den can leave a coyote more vulnerable. Coyotes forced out of their den during the day may move to another den for safety reasons.

Where Do Coyotes Sleep?

Coyotes sleep in a variety of dens and locations. Depending on where they reside, the availability of sleeping locations will differ. Many coyotes make dens using their natural digging abilities. For the coyote, digging is the most common way to make dens.

When building dens, coyotes always consider the climate and resources nearby. Coyotes also consider the importance of continuing to extend their pack’s territory.

Coyotes value the safety of their pups and often move to a new location between each nap, even in a pup’s early months.

Male coyotes are not allowed inside dens except for rare cases. Instead, males seek out covered areas that still allow them to guard their den entrance.

The following include places that coyotes sleep:

The coyote makes dens in the wilderness out of many things such as underbrush, den stealing, and making dens from hollowed tree trunks.

Covered areas are the most common choice for coyotes in urban areas. City-dwelling coyotes can sleep in alleys during the day, the perfect spot for a makeshift sleeping area.

Shrubs, tall grass, and other kinds of foliage are great places for coyotes to take a nap during the daytime. Tall patches of grass are fantastic for remaining hidden from potential prey.

Furthermore, coyotes are known for stealing dens from small animals like rabbits. They will drive these animals out and then extend their dens larger to accommodate for their size.

Keep in mind that coyotes are sleeping in the middle of the day. Ideally, their bed will be in a low-traffic location where they can relax. Choosing a shady area under the sun is excluded enough that they can get a peaceful rest.

At the same time, the coyote will still want to remain alert and have eyes on their surroundings. The coyote’s shady tree is perfect if their tree is in ear’s reach.

The coyote is a clever animal, skilled to build or seek out the best shelter to survive in any environment. Coyotes have natural survival skills that help them thrive under trying conditions like the snow, desert, and dense rain.

Similarly, the terrain a coyote lives in can impact where a coyote chooses to sleep. In a mountain terrain, coyotes make abandoned caves a great home. Alpha males may also nap in the open on top of the mountain, in that coyotes have the broadest range.

Yawning: Does It Means That The Coyote Is Sleepy?

There are many reasons why canines yawn. It symbolizes emotion, comfort, and more. If you are observing coyotes, it can be very telling when a coyote yawns.

A yawning coyote can mean the following:

A common reason that coyotes yawn is stress. Stress often comes because of their surroundings. Stressful surroundings include environment, other coyotes (competing alpha males, predators, coyotes impeding on territory), and more.

Male coyotes can become especially anxious during the mating season because they must sleep outside their den. There is an additional layer of caution in the first few months of his pup’s life. The alpha male coyote will inevitably be on edge.

Do Coyotes Make Sounds When They Sleep?

Because of the other behaviors coyotes share with dogs, coyotes could inherit similar dog behaviors like whimpering or whining while sleeping. As of now, there is currently no evidence that this behavior exists!

We already know that coyotes make all kinds of sounds to express emotion and need. It is easier to judge their feelings based on these sounds. By learning to interpret new sleeping sounds, we might have a better idea of understanding these tricky canines!