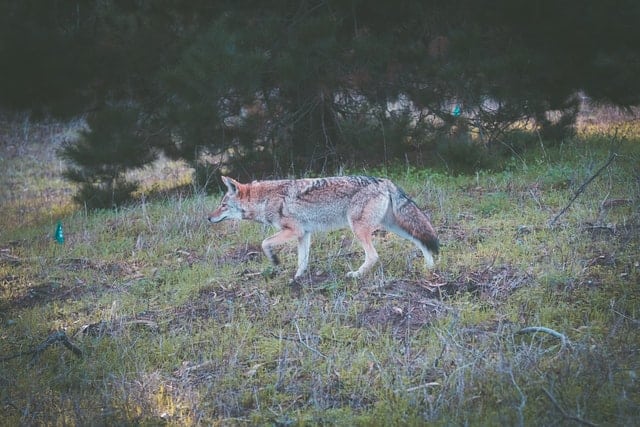 Coyotes rely on their excellent sense of smell to help them scavenge food from the wild. This wild canine is one of the smartest scavengers in the wild, known for sniffing out food and even digging underground for carcasses, worms, and rats.

The coyote can pick up the odor of domestic and farm animals from a couple of miles away, with the ability to track a scent.

Although, the opportunistic canine does not often take the time to track smells they are smart enough to follow this scent for as long as they need. Coyotes will also follow the scent of fresh blood, potential partners in heat, and much more.

Coyotes maintain a putrid smell by rolling in the carcasses of deer and small animal remains. Trash, mud, and sewage are common places that coyotes gather foul stenches so they may spread it on their bodies and then to the rest of their pack. The foul stench of the coyote is a part of the canine mentality.

Do Coyotes Have A Good Sense Of Smell?

Coyotes have a good sense of smell, which is one of the reasons they are such great hunters. They are able to sniff out animals including farm, domestic, and dead animals from roughly three hundred and fifty yards away. One of the coyotes’ favorite dishes is carrion, dead animals.

Because the coyote loves the smell of dead animals, they are able to smell this odor from far away. They are also able to smell the scent of wet and dry blood from miles away as well. This tracking ability makes hunting easy for the wild canine.

Coyotes can easily pick up the scent of domestic animals like cats and dogs. Typically, cats and dogs leave off a strong scent, especially their urine and feces. Coyotes are also prone to pick up the smell of a female dog in heat.

One of the main animals that coyotes are attracted to, tends to be farm animals like chickens. Coyotes are drawn to chickens because the odor of their cages is strong.

Chickens freely poop in their cages and thus have a concentrated smell directly within the area they are kept. Coyotes are intelligent animals who have learned over the years that chickens are easy to get.

Livestock like cows, sheep, and goats will also draw the attention of coyote packs. These prey are larger and require more coyotes. But, the attention of the coyotes will certainly be drawn if they smell livestock in the area. For coyotes, all livestock are generally defenseless animals that can supply the whole pack with protein.

Can Coyotes Pick Up Smells From Far Away?

Can Coyotes Smell Blood? From How Far?

Although coyotes can smell fresh blood, does not mean that they will act on it. The smell of blood indicates that an animal has been killed.

Coyotes are close to the top of the food chain compared to most predators, but they are still vulnerable to large cats and wolves. Most coyotes will stay cautious and wait a few hours before following the scent of fresh blood.

Do Coyotes Use Their Sense Of Smell For Hunting?

One of the reasons coyotes are such great scavengers is because they use their excellent sense of smell for hunting. Coyotes use their noses to smell out animals and track them short distances into their burrows where they can either lure them out or follow them into their underground den.

Coyotes can easily detect water. They can smell water easily and if they do not detect any water nearby, they will forage for their own water source by digging underground. The coyote will continue smelling as they dig to determine if they are getting closer to a water source.

As you near a natural underground spring, both the smell and texture of the dirt will change.

Coyotes cannot smell fear. However, coyotes can smell the body odor that humans secrete when they begin to sweat out of fear. Coyotes are hyperaware of this smell and can detect it on other animals too.

What Do Coyotes Smell Like? Do They Have An Odor?

Coyotes have a retched body odor that smells like rotten carcasses and wet dogs. The reason that coyotes smell so bad is that they love to roll in the leftover remains of dead animals. Many people claim that the coyote’s odor is so putrid that it can be smelled from a far distance away.

Coyotes love to swim in the water but that is not the reason that they always have a wet dog smell. Coyotes are naturally smelly and the wet dog smell comes from their lack of cleanliness.

The lack of cleanliness that coyotes have causes them to have a similar repulsive odor to the smell of wet dogs. However, this wet dog smell does not dissipate when they dry and it is constant.

This occurs because the wild canine is always dirty and the coyote does not take time to bathe itself. When the coyote performs regular bathing, it is spreading the breath of rotten carcass onto its fur.

Coyotes love the smell of skunks and will often bully skunks until they spray them with their putrid odor. Because of their intense odor, skunks have become a favorite meal of coyotes. They are a good snack to eat firsthand and their leftover remains are the perfect smelly place for the coyote to continue rolling in for the following weeks.

Why Do Coyotes Smell So Bad?

Do Coyotes Leave Their Scent Behind?

Coyotes often roll around and rub their backs against trees, which can leave their foul scent behind. They will also rub their scent against each other and spread their smell from one coyote to another. This spreads their smell among the pack and helps each coyote remain dirty.

What Smells Are Coyotes Attracted To?

Coyotes are very attracted to the smell of carrion, also known as dead animals. The smell of dead animals is the most intriguing smell to the coyote. The coyote is stimulated by many other foul smells including skunks, trash, and other items humans do not enjoy.

The smell of fresh kills and blood is also appealing to the coyote. However, coyotes are often hesitant to approach freshly killed food because they get fearful of larger predators.

Are Coyotes Attracted To Skunk Smells?

Coyotes are attracted to anything that smells bad (to humans), including skunks! For humans, being sprayed by a skunk is a nuisance. To the coyote, it is a great day!

Are Coyotes Attracted To The Smell Of Humans?

Coyotes do not like the smell of humans. If a coyote smells humans, they are likely to leave the area out of fear.

Can Coyotes Smell When Other Animals Are In Heat?

Coyotes can easily smell when other canines are in heat. One of the main reasons that they are attracted to residential areas, aside from eating food, is because they can smell female dogs in heat.

Are Coyotes Attracted to Other Animals In Heat?

Coyotes dislike the smell of pungent odors such as white vinegar, cayenne/chili pepper, and strong perfumes. Since wolves are the top predator of coyotes, the coyote is also deterred from the smell of wolf urine.

Wolf urine is a good smell to put in the area to drive coyotes out of an area because it will make them fearful for their safety. (You can actually buy wolf urine off Amazon)