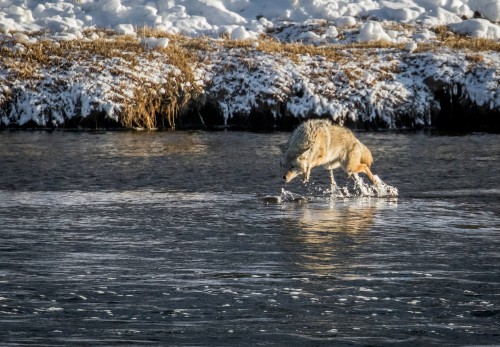 Coyotes are great swimmers who swim to travel across water bodies, hydrate, and more. Water bodies are great sources of water and food for coyotes. The opportunistic canine will eagerly track small aquatic mammals in or around the water and hunt them.

Coyotes have fantastic endurance and can swim at least half a mile before tiring themselves out. Even as pups, coyotes learn to love the water. They will swim straight across rivers with heavy currents and scale the sides of steep riverbanks with minimal effort.

Water bodies that are teeming with wildlife have the potential to support coyotes. Coyotes approach water bodies like ponds and lakes eagerly to drink, eat, and bathe on hot days.

Coyotes are excellent swimmers who swim to cool off, travel, and drink. Sometimes, coyotes even use water to catch food. Swimming comes naturally to the coyote.

Water bodies like lakes, ponds, and rivers are the main water sources for hydrating coyotes. Coyotes rely on water sources far from civilization. It is unlikely to spot a coyote at a water body frequented by humans unless they are desperate for water.

Coyotes are fearful of human activity, so they will avoid water that people use like swimming pools unless they are severely dehydrated. Residential homes and people living in the city claim coyotes drink from pools, dog bowls, and street garbage. The reason coyotes drink from human water sources is they do not have a water source of their own.

Natural water sources like rivers and ponds are ideal for coyotes. Ponds, lakes, streams, rivers, and other natural waters are great food sources for coyotes. If the coyote is a strategic hunter, the fish can provide them with many necessary proteins. Additionally, most ponds and lakes have several aquatic and terrestrial mammals living in or alongside them that the coyote may hunt.

Are Coyotes Scared of Water?

Coyotes are unafraid of water and will often take a recreational swim when they get the opportunity. Water bodies are the coyote’s main source of hydration and one of the places coyote’s go to seek food.

Water bodies are a great place for coyotes because they provide them with a lot of the daily protein intake that they need. This wild canine will prey upon other animals that are drawn to water bodies, such as deer. They will also prey upon fish and aquatic species inside the water and mammals that live alongside the edges of the water.

The terrestrial canine prefers to travel by land. But, if a body of water obstructs its path, coyotes will eagerly cross it without hesitation. Crossing water bodies saves time, and in most cases, it saves energy in the long run.

Will Coyotes Avoid Crossing A Stream Or A River?

Coyotes will not avoid crossing streams or rivers because they value their amount of time and energy. The hyper-intelligent coyote does not like to exert more effort than necessary, which means that they do not want to travel any longer than necessary.

Coyotes understand time and distance. They use this when calculating their path and traveling to their destination. Since coyotes are constantly adapting to their surroundings, they will change their path in an instant if they notice cutting through a water body will save them time.

The exception to cutting across a stream or river is if the current is too fast. Coyotes can make great judgment calls when it comes to the pace of the river. If there is a storm, which has caused the water to quicken, coyotes may not attempt to cross the river or stream.

The composition of the coyote’s fur means that they can swim in cold weather. During winter, the coyote can continue to cross streams and rivers without worrying about hypothermia or illness.

The wild coyote is a naturally good swimmer. They are capable of swimming long distances without getting tired. Coyotes may swim recreationally, to travel, or for other reasons.

Coyotes are very intelligent canines that make great decisions when it comes to swimming.

Coyotes prefer to travel by land, but swimming gives them a chance to escape predators, search for food, become hydrated, and more. Swimming is an instinct for the coyote that they are born with.

Some coyotes frequently swim due to the many nearby streams and rivers. Others rarely swim because they do not have any nearby water bodies. Coyotes thrive in a large range, which means they have learned to adjust to any habitat. Even those who live without many nearby water sources still have the instinct to swim.

How Far Can Coyotes Swim?

Coyotes can swim at least half a mile (0.8 kilometers) before tiring out. This distance is more than most rivers or streams. It takes minimal effort for the coyote to swim, which is why they can swim such long distances without stopping.

The half-mile distance that coyotes swim does not include straight lines, either. Coyotes are capable of swimming through twisting rivers as they follow scents from one place to another. On hot days, this helps them maintain a low body temperature and still travel.

Coyotes do not bathe to remove the odors from their bodies, but they do bathe to cool themselves off in hot weather. The adaptive and intelligent canine uses cold water on hot days to lower their body temperature. This tactic helps them survive hot summers and sudden heatwaves.

Unlike other animals who may bathe to clean themselves, coyotes love foul odors and pungent smells. While swimming, the foul odors will naturally bathe clean from their bodies. After swimming, coyotes may immediately roll themselves in dirt or carrion to reclaim their previously rotten smell.