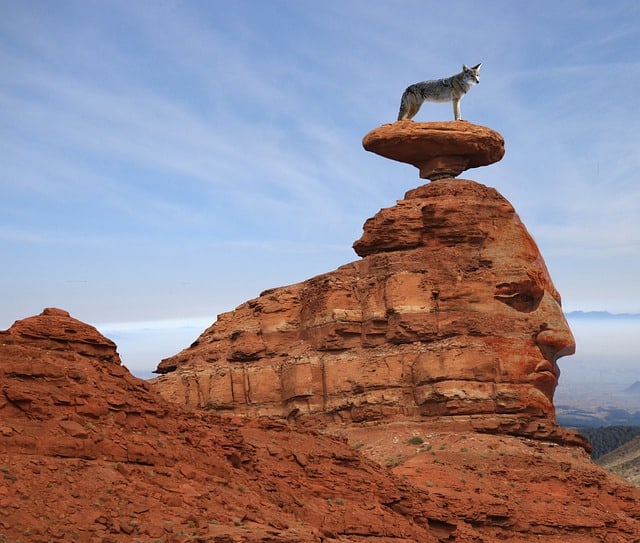 People have many different interpretations of what the wild coyote represents. These spiritual canines are intuitive trickers known for their sneaky tendencies. Many cultures have their own renditions of these spiritual creatures.

Coyotes have a significant meaning in the Native American culture. There are many folklore tales involving coyotes that represent the coyote’s adaptive personalities. Common themes surround shapeshifting, deceit, and trickery.

The context in which you saw the coyote can affect the meaning behind it. For instance, seeing a coyote in your dream can have a different meaning than a coyote spirit guide.

What Do Coyotes Represent For People?

There are many representations of what coyotes can mean. Coyotes are special animals that have many unique traits like their resourcefulness. The coyote is thought to be a sign of good luck.

The Coyote In Native American Culture

Each tribe has unique folklore and legends about coyotes passed down from generation to generation. Like coyotes, they assume new adaptations when told from person to person.

Many tribes have their legends involving coyotes which tell tales of their trickery and cleverness. Many tales involve coyotes as shapeshifters which involve altering your perspective on life.

The Cahuilla tribe tells a legend about a creature known as Isily.

Isily is a trickster coyote known for its devious ways that often get him in trouble. His mischief and recklessness often cause trouble to the people around him. These tales warn about the consequences that come from surrounding yourself with irresponsible and immoral people like Isily.

Tales differ from tribe to tribe, each with a similar lesson to be wiser than the average animal.

Coyotes are often spirit animals that represent good wit and good luck. A coyote totem is often a reminder that you should stay level-headed in trying situations and lighten up.

Native Americans believe that the coyote spirit animal represents someone who needs a positive guide in their life. Call upon coyote spirit guides when you need a reminder to lighten up and stay positive in trying situations.

Someone whose spirit animal is a coyote is often lacking enjoyment. Coyote spirit animals try hard to bring light back into the lives of the people they are trying to guide. Listen to your inner coyote and bring some playfulness and laughter back into your life.

A spirit totem is an animal, symbol, or object that shares an animal’s spiritual qualities. The clever coyote totem represents the playful and humorous side of the coyote. Many people relate to the intuitive coyote’s laughter and trickery.

People with a coyote totem often have a great sense of humor. Coyote totems are someone clever and adaptive with a truly adventurous spirit! Like the coyote, you are clever and resourceful enough to survive independently but thrive as a member of the pack.

What Do Coyotes Symbolize

Coyotes symbolize many different things for people. Depending on who you are, you may interpret what this canine means. Some of the most common things that coyotes symbolize are:

Coyotes have many positive symbols. They are a reminder to stay mindful of your actions.

In general, coyotes are a sign of good luck. These clever canines may be wild, but their wittiness allows them to adapt to stressful situations. Seeing a coyote or dreaming of a coyote may signify that you are heading in a positive direction.

Coyote totems are often a token of luck during times of transformation. Harnessing the spirit of the coyote is a common way to promote positive energy.

I Dreamt About Coyotes: What Does It Mean?

The presence of a coyote in a dream can have multiple meanings depending on the experience of the dream. For instance, a dream where you are petting a coyote has a different meaning than a dream where a coyote has attacked you. The distinction between these dreams is the context that the coyotes appear.

To interpret the context in which the coyotes appeared in your dream, consider the emotions that the dream made you feel. Emotions can make interpreting the positive or negative connotations of the dream easier.

There are many different positive meanings behind dreams about coyotes. Dreams that invoke positive feelings often represent positive things.

One of the most common positive associations with dreaming about coyotes represents the dreamer’s satisfaction with their current place in life.

Coyotes are resilient travelers who can adapt to any situation. If you have recently taken on a new opportunity or overcome a new challenge, your inner coyote will likely show itself in celebration.

Common, positive meanings behind coyotes in dreams include:

Dreams that cause negative emotions have negative meanings, like experiencing deception in your waking life or having weaknesses.

Common, negative meanings behind coyotes in dreams include:

Seeing coyotes in your dreams can be a sign of weakness in your waking life, perhaps in the form of the health realm, mental and physical. Coyotes are often a sign that you need to loosen the reigns on your life.

Idioms, Sayings, And Expressions About Coyotes

Native Americans love to pass down tales about spirit animals, especially the coyote. There are few written sayings and expressions about coyotes; however, there are plenty of folktales about coyotes.

Some key Native American legends include the following: