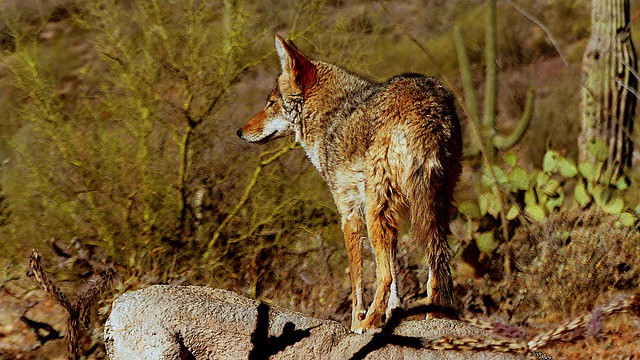 Coyotes are highly territorial animals who become defensive when other animals intrude on their territory. The territory is chosen based on available resources, coverage, and nearby threats. The coyote is highly adaptive to their surroundings, and they can find sustainable territory anywhere they go.

The wise coyote always considers the threats it may encounter before establishing permanent residence. Droppings along property lines, in concentrated areas, and in the middle of animal trails are signs of territory lines.

Coyotes also howl through the night to signal ownership of the area. These territorial signs are warnings to approaching coyotes (and other animals) not to continue.

Territorialism is a strong characteristic of the coyote. Coyotes that operate in packs (also called residential coyotes) establish a distinctive home range based on available resources and defensive needs. Instinctively, the territorial coyote will do anything possible to defend its pack.

Coyotes are intelligent animals who use their instincts to defend themselves against threats. When another coyote or large animal comes onto their territory, coyotes will turn to defensive strategies.

Unless the animal is a predator of the coyote, they will attempt to confront the animal.

Do Coyotes Have Territories?

If they are a part of a pack, then coyotes will have territories. Coyotes establish these territories to make hunting and birthing pups easier. It is much less difficult to scavenge food when coyotes have dedicated territory.

Solitary coyotes may compete with residential coyotes for territory, with the largest alpha male consistently winning these battles.

How Large are Coyote Territories?

In some cases, a pack’s territory can extend for miles. These packs do not have to be large, either. Alpha male and female pairs can control a dozen square miles of territory by themselves.

Do Coyote Territories Belong To Packs or Individual Coyotes?

Most people assume that it is only because of their numbers that residential coyotes can control land. However, they may also control territory based on the environment, including the climate, nearby predators, and more.

When it comes to solitary coyotes, they do not own territories. Instead, they will roam around freely and settle wherever they can.

Packs have large numbers, which makes them more capable of defending themselves than individual coyotes. Individual coyotes (also called solitary coyotes) are more likely to have territory overtaken by predators or alpha coyotes.

Residential coyotes with a large alpha male (and large alpha female) are considered powerful. Healthy, strong packs will be higher on the social hierarchy than malnourished packs. Whether the alphas are a duo or the leads of a large pack, their place on the hierarchy makes them extremely efficient at controlling territory.

Local environments can have an impact on the amount of territory that coyote packs control. Nearby predators are a major influence on territory control. Predators like wolves, which frequently impede the coyote’s territory, can force the coyote out of their territory at any moment.

Environments with large amounts of prey are great for coyotes because it guarantees that they can provide for themselves and their pack. Territory can expand when there is excessive food. Furthermore, excessive food allows the pack to expand at a healthy rate.

Coyotes may control more territory mainly because accessible food gives coyotes more energy. With more energy, coyotes can travel further! Establishing multiple shelters and dens across their territory can benefit a coyote, especially before having pups.

Similarly, coyotes will control more territory when there are more places to take shelter and make dens. Female coyotes must move their pups in the first few months as they begin to grow. The more locations and dens the alpha female mother can choose from in her territory, the better odds their pack will grow.

Do Coyotes Mark Their Territory? (How?)

Another way that coyotes mark their territory is by establishing a general pack restroom area. A concentrated restroom area is a definite way to raise the stink level. Intruding animals are much more likely to smell coyote poop if gathered in a centralized area.

The peculiar coyote has another irregular behavior which results in this canine loving the smell of dead animals. As a result, coyotes will roll around in the smell to transfer their scent onto them. To save the carcass for themselves later, the coyote will mark it as their territory by urinating on it.

How Do Coyotes Defend Their Territories?

Coyotes defend their territory in numerous ways like physical combat, verbal communication, and more. Like many other mammals, coyotes precede physical confrontation with a verbal warning.

Coyotes may growl or huff to express anger. Yawning is another sign of fear that symbolizes a mutual concession.

These verbal warnings are usually enough to make the intruder back away. Verbal communications show that the coyote is ready to attack. If the intruder does not back away, they might be in for a rude awakening!

Are There Specific “Territorial Calls” That Coyotes Use To Communicate?

Some of the specific territorial calls that coyotes use to communicate are barks and yips, which relay to other coyotes that coyotes are residing in the area. Howls alert solitary coyotes searching for land that they cannot establish territory in the area.

Coyotes will also group howl to call their fellow residents back to the den after a night of hunting. Similar to the way it keeps intruders off their territory, coyote calls keep fellow pack members within their territory.