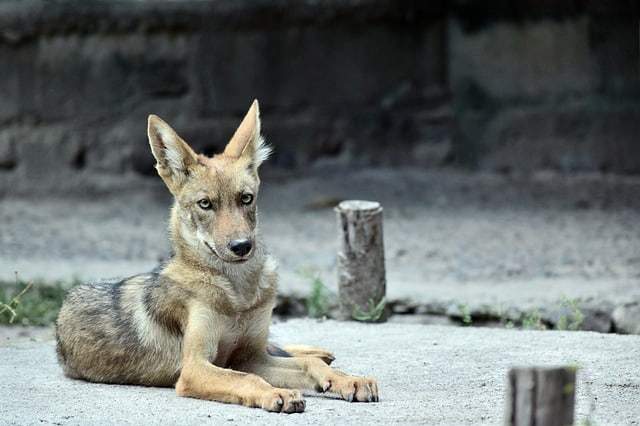 No one can say for certain what coyotes see or how they see. Some studies have revealed a few of these mysteries and other experts guesstimate based on what we know about K9s in general. Regardless, coyote eyesight is an interesting and intriguing study.

Although we may want to perceive coyotes from a human perspective, it’s important to understand that they see the world in a totally different way. But, to understand how this differs, we must look at it in comparison.

Compared to humans, coyotes are near-sighted. Scientists estimate they have 20/75 vision or worse whereas humans have 20/20. This means humans see farther than coyotes by about 50 feet.

However, coyotes have amazing peripheral vision superior to humans. They can see around 260° while we only have 180°. Whatever they lack in distance, their eyesight makes up for in periphery. They can pick up movement long before they locate or identify it.

Are Coyotes Color Blind? Can They See Red, Green, Orange, and Other Colors?

Coyotes aren’t color blind but they may not have the same vivid spectrum as humans do. Many recent studies suggest they can see yellow and blue while all other colors, like red, green, and orange, appear as a shade of gray.

Coyotes cannot see infrared light in any capacity. The only mammals that can see infrared are human beings. This is because we can detect infrared as heat. We view this as an emanation from the internal heat all animals produce.

But, in regards to UV light, early research suggests that coyotes do have a small UV visual spectrum. This is due to their ability to see blue colors. Although tiny, it’s enough for coyotes to see clothing washed in detergents with fluorescent whitening agents.

Can Coyotes See Well in the Dark?

Coyotes can see very well in the dark. Although their sight during the day is 20/75, this improves once the sun goes down. Experts estimate they can see seven times better than that of humans in low-light situations.

Are Coyotes Eyes Reflective? Can You See Them at Night?

Coyotes’ eyes are very reflective and you can definitely see them at night. They have big eyes with a bright white glow. Because they’re pack hunters, it’s not infrequent to see several pairs of white glowing eyes once the sun sets for the day.

Coyotes have reflective or glowing eyes because they contain a tapetum lucidum. This is what improves their eyesight at nighttime and helps them see in the dark. It’s what allows them to track prey and hide from potential danger.

What Colors Can Coyote Eyes Be? Yellow? Blue? Green?

Coyote eye colors can come in a wide array of hues. They are most often in varying shades of yellow, from lemon to a rich golden brown. But some people report seeing their eyes as orange, reddish-brown, and almost black-brown.

Although rare, they can also range in greens, from a very pale pastel to a medium sage.

Blue eyes are mostly in younger coyotes before they reach adulthood but it’s not an uncommon eye color. As a matter of fact, this phenomenon is increasing.

As recently as January 2019, many Californians reported how there’s a pack of blue-eyed coyotes roaming the northern part of the state.

What Color Are Coyote Eyes at Night? How Do They React to a Flashlight?

Coyote eye color is the same at night as it is during the day. They don’t change based on the setting sun. But, once a flashlight shines in their eyes, you will notice that fiery white glow coming from them. Of course, if the flashlight color is green or red, their eyes will also have a tinge of those colors.

Could You Be Seeing Another Animal’s Eyes? Like a Deer or a Fox?

If you see that white reflective glow, it could very well be a coyote but it could also be a deer or a fox. While it’s useful to identify eye reflection to determine if you have a coyote in front of you, you also need to pay attention to where these eyes sit in relationship to the space around them.

This means if the eyes sit higher than a bush, it’s more than likely a deer. Foxes generally tend to be smaller than coyotes, but this will depend on whether they’re crouching or standing on a tree trunk, boulder, or some other area above or below you.

Coyote eyesight is exceptional. Although they can’t see as far as we can during the day, they have a wide peripheral vision. But, once nighttime sets in, their vision improves, and can see in the dark with great ease.