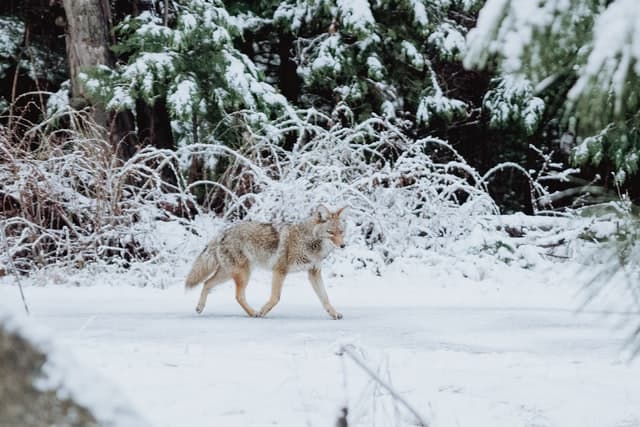 Coyotes are crepuscular mammals that awake at dusk to hunt. The coyote is a mesocarnivore that hunts smaller animals at dusk, like deer and rabbits. They become active at dusk because this is when their prey is the most active.

Changing weather conditions can impact the activity of the coyote. Coyotes will refrain from leaving their dens if their vision and smell are negatively impacted by the weather.

Coyotes are active animals who can adapt their sleeping schedules to fit their needs. Although they are most active around dusk, they may also travel and hunt during the day. The coyote is an opportunistic animal who seeks out food when they have the chance. The exception to this rule is rainy weather.

Are Coyotes Nocturnal? (Or Crepuscular?)

Coyotes are crepuscular animals, which means that they become most active at dusk. At dusk, many of the coyote’s prey become active. The activity entices the coyote to come out from their den to hunt.

The coyote often hunts and travels through the night. In the early morning hours around twilight, you can hear the sound of howling coyotes. The early morning howls indicate that coyotes have completed their late-night hunting and are retiring to their dens for the day to sleep.

Do Coyotes Like Sunlight? Do Coyotes Need Sunlight To Stay Healthy?

Coyotes enjoy the sunlight, but they do not require sunlight for survival. Many mammals need sunlight for its nutritional benefits. For coyotes, sunlight is not their main source of vitamin D. Coyotes eat plenty of fruits and vegetables to get their sources of vitamin D.

Do Coyotes Ever Hunt During The Day?

Afternoon and mid-morning hunts are common for coyotes who are traveling during the day. Pregnant coyotes and coyote mothers may also escape from their dens midday to retrieve food before returning to their dens.

Why Coyotes Are Most Active In The Dark

Coyotes are active at night because this is when most of their prey is active. Darkness is a great time for coyotes to travel because it conceals the coyote as it travels at night. As a medium-sized mammal, the coyote still has predators. They must remain aware at all times, and the darkness helps them stay hidden from large felines and canines.

Do Coyotes Come Out In All Types Of Weather?

The coyote relies on its sense of smell and keen vision to hunt. Without two of its most important senses available, hunting is impossible. Coyotes also lost the ability to remain on full alert. The vulnerability means they are prone to becoming prey to large predators like wolves or mountain lions.

How Does Rain, Snow, And Cold Weather Influence Coyotes?

The coyote is highly adaptive and has learned to adjust its body temperature along with the changing weather. Still, the weather has a major impact on the coyote. Coyotes are intelligent animals who account for the weather when hunting.

Harsh storms can obstruct the coyote’s vision which deters them from coming out of their dens. With an inability to see, this means the coyote has no chance of catching prey. Therefore, they will stay in their den until the rain stops.

Snow and the cold do not bother coyotes. They are happy to hunt and explore cold terrain. When it comes to blizzards and flurries, coyotes make a similar judgment about snow as they do with rain. If the downpour of snow is heavy enough to obstruct their vision, the coyote will remain in their den.

Do Coyotes Ever Pass Away From The Cold?

Coyotes can survive cold weather because of their dense fur and ability to adapt to extreme weather. In extreme conditions, a coyote may have difficulty adjusting. The coyote will quickly accommodate the new temperature by digging underground burrows to escape the cold weather.

In regions with changing weather, coyotes adapt their activity level to the changing weather. During cold months coyotes become less active so they can conserve their energy.

Can Coyotes Hunt By Smell When It Is Windy?

Coyotes typically have an acute sense of smell, but when it is windy, the coyote’s sense of smell is inaccurate. Because their smell becomes impeded by the wind, most coyotes will refrain from leaving dens on windy days.

In contrast, some solitary coyotes roam during windy days because coyote packs and large predators cannot accurately identify their location as they pass through their territory.

How Do Coyotes Handle Heat? Will Coyotes Be Active In A Heat-wave?

Coyotes handle the heat by remaining inactive so they can keep their body temperature down. They will often sleep throughout the day under a shady tree, in bushes, or under a fallen log to avoid sunlight. Coyotes may also retire to their den to avoid sunlight.

During a heatwave, it is not uncommon to see coyotes taking a dip in a body of water. Swimming lowers their body temperature and can hydrate them at the same time if they choose to drink. Aside from swimming, many coyotes choose to remain under shady areas or inside dens during the length of heatwaves. They exert minimal effort, so they do not cause a rise in their body temperature.

If a coyote gets hungry midday during a heat stroke, they often forage instead of attempting to hunt. Hunting exerts more effort and will therefore cause their body heat to rise more.