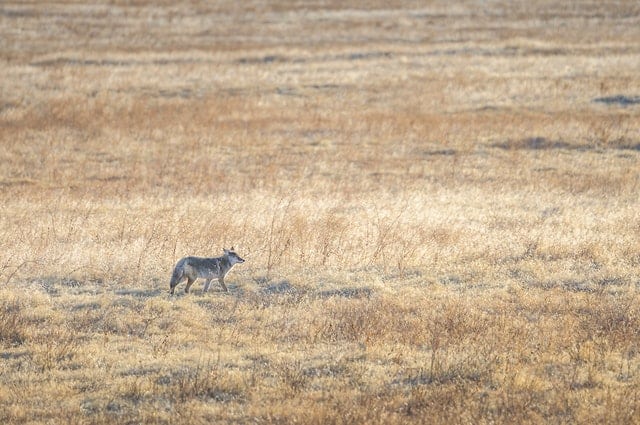 There are many dangers to coyotes in nature. Although coyotes are a major predator to small animals and insects, they are also many large predators’ main food source.

Despite acting as a major predator to mesocarnivores, the coyote is still prey itself. Coyotes are prey to larger predators like mountain lions, wolves, black bears, and other large animals. Above all, the largest threat to coyotes is humans, who hunt them without reason.

The main reason that humans are a threat to coyotes is because of uneducated hunting practices. Many people attempt to drive coyotes off their property, unknowing this will only cause excess repopulation.

What Are The Dangers To Coyotes In Nature?

Large canines are the most prominent danger to coyotes. Since coyotes are descendants of wolves, they are the gray wolf’s natural prey. Large cats are another common danger to coyotes in the wild. Both large mammal species can inflict major damage to coyotes.

Discarded trash can also be dangerous to coyotes, although this is more common in more urban areas.

As scavengers, coyotes are prone to eating anything they can find. Humans who litter and leave trash lying around are contributing to potential coyote poisoning. Coyotes may have iron stomachs, but when dangerous chemicals are mixed with leftovers, the coyote can suffer a sad fate.

Is The Coyote An Apex Predator? What’s Its Place In The Food Chain?

Coyotes take a comfortable place in the middle of the food chain. The main role of the coyote is to restrict mesocarnivore populations like bunnies, foxes, and rats. The predatory nature of the coyote makes them a predator to many small mammals and insects.

Many large predators prey on coyotes because of their relatively small stature.

Animals that hunt coyotes include:

The coyote’s main predator will forever be the wolf. These long descendants have a larger frame and are higher on the food chain than coyotes. Unless the coyote adapts its genetics to become larger, faster, and stronger, it will remain below the wolf on the food chain.

Can Other Animals Like Rattlesnakes, Foxes, Or Deer Be Dangerous To Coyotes?

Small varmints and mammals are not a threat to coyotes. Rattlesnakes and foxes are a normal part of the coyote’s diet. Coyotes often hunt in packs to take down larger prey like deer.

Depending on the number of coyotes hunting together, the type of prey they hunt will be different. Numbers may also impact whether an animal is a threat. For instance, a bison might be a possible target for a large pack of coyotes. However, approaching a bison alone can be dangerous for a coyote.

What About Farm Animals Such As Cattle, Horses, Mules, Or Donkeys?

Cattle are slow-moving, a downfall compared to the quick coyote, but that does not mean they are defenseless. Beef cattle are strategic when it comes to their defense mechanisms.

These cattle herd young into the middle, which makes combating single or group coyotes easier.

Common defense mechanisms cattle use are head butts, kicking, stomping, and flying (jumping). Other farm animals act similarly like horses, mules, and donkeys, who use similar self-defense tactics when confronted by these predators.

Can Dogs Be Dangerous To Coyotes?

Some dog breeds, like German Shepherds and Labradors, can threaten coyotes because of their size. Coyotes are generally closer in size to medium-sized dogs like a Border Collie or Poodle. Many other small dogs are at threat by coyotes.

Coyotes and domestic dogs rarely come into confrontation with each other. Unless provoked, neither domestic nor wild dogs aggress each other. If they feel threatened, coyotes often retreat, which leads most dogs to retreat themselves.

Interactions can become dangerous when these canines make communication errors. Dogs become dangerous to coyotes when they make bad judgments about why a coyote is retreating. The reason coyotes retreat is to avoid confrontation. When a dog sees this, they have several other reasons in mind why a dog would be running away from them.

Dogs may chase retreating coyotes into the woods because they think it is trying to play with them. The coyote inevitably feels threatened when they notice the dog chasing them and will attempt to defend themselves. When confronted with this aggression, dogs instinctually defend themselves.

Large dogs win these confrontations because of a size advantage, and small dogs often face an unfortunate fate. Breeds such as an Irish Setter, Greyhound, or American Bull Dog can inflict life-threatening damage to a coyote. These large dog breeds can weigh up to three times the size of a coyote!

The Biggest Danger To Coyotes: Humans

Humans are the biggest danger to coyotes because they trophy hunt them to sell their hides. Rural hunting is becoming more common as people refuse to listen to organizations like the Humane Society that advise against hunting these cousins of the dog.

Among the problematic humans are the disgruntled farmers who have tried unsuccessfully for years to remove coyotes from their property. Most attempts involved tactics resulting in excess repopulation.