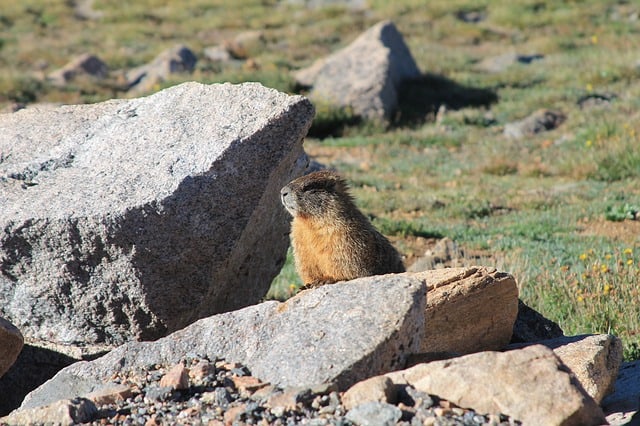 So, groundhog. Small furry critters that are the bane of yard owners everywhere. They burrow complex tunnels that are honestly quite impressive, if not for the fact that they can destabilize your yard.

See, by burrowing, they tend to compromise surface-level stability because of their digging.

But, did you know that despite being primarily tunneling creatures, their eyesight and hearing are remarkably good?

Groundhogs have remarkably good eye-sight. Many hunters report that a groundhog can spot a moving vehicle from a great distance away, and keep in mind, these are creatures designed for digging. From 250-300 yards away, they are made for identifying danger and scampering away in the blink of an eye.

In addition, their hearing is also reported to be extremely keen. As expected from a prey animal, their senses allow them to hear a human walking across grass from over 500 yards away.

While that might not seem like much to us humans, who can cross fields like that in little under five minutes, keep in mind these are small creatures who can’t make such long strides as us.

We might be giants after all, and to Groundhogs, we’re probably the apex predator of their species.

But, groundhogs are rodents with a large diet and tend to go foraging for vegetables very often. Even when in a dangerous area, they’ll usually come out after a few minutes to see if anything has changed.

A patient hunter could probably outlast a groundhog, though, with their keen eyesight and hearing, that might be tricky.

Dogs, large birds, and other tunneling creatures are other predators for this rodent, but they can’t get into their burrows as we can. Or, at the very least, we have other options for getting them out of their homes.

That said, if one gets out of their homes and is chased down by a predator, then there’s a real chance they’ll be caught. A groundhog can only run up to 8mph, while say, a dog can reach speeds up to 25MPH or greater.

And there’s no way a small little critter like a groundhog could avoid being shot by a bullet going over the speed of sound.

So, groundhogs aren’t just fast critters that can burrow underground, but they are also surprisingly aware of their surroundings. But, at the same time, their burrow is practically their only defense, if that is removed, then they have no other means of survival.

And, despite that, they still have a numerous population, with homes practically everywhere in the U.S. Just goes to show what can survive out in the wild, huh?