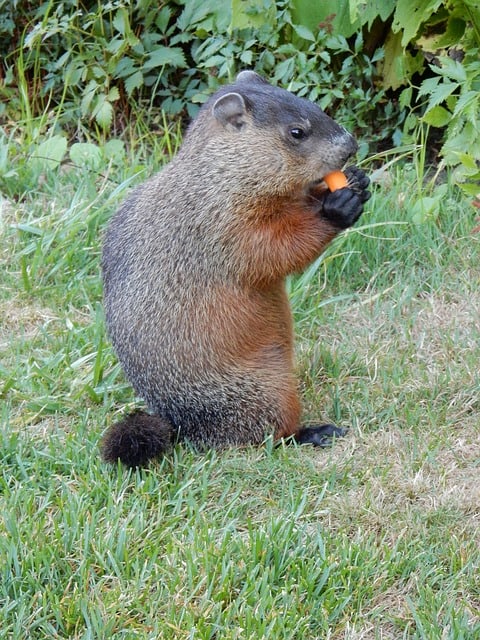 I’ve seen the movie Groundhog Day more times than an adult should be allowed to watch it. But I’m not sure I’ve ever paid attention to whether or not he had a tail. I would say yes if I had to guess. So I looked up a picture of the bringer of more winter or early spring, and yes, he does in fact have a tail.

Why Do They Have A Tail

A groundhog’s tail isn’t as fluffy and long and bushy as a squirrel’s tail. The coloring is going to be different as well.

So if you think a larger squirrel in your backyard, but it looks slightly off to you, it is probably a groundhog.

What Does A Groundhog Use His Tail For?

Other than looking cute, what is the purpose of a groundhog’s tail? A male and female groundhog use their tail for a different purpose.

When a male groundhog finds a female he likes, he uses his tail to let her know. A male will wag his little tail like a puppy to let the female know he likes her.

A mother groundhog will wag her tail in happiness when she comes back home to her babies. That’s not unlike a lot of other animals that wag their tails to greet each other or for happiness.

Groundhog, woodchuck, and squirrel. Which is which? Well, I had to be reminded that a groundhog and a woodchuck are actually the same thing. So there’s that one. But between a squirrel and a groundhog?

Look at the tail. That should be a dead giveaway of whether you are looking at a groundhog or a squirrel. But even without that fun tail, a groundhog’s adorable overbite would also give himself away. Give Groundhog Day one more watch, pay attention when they pick Phil up and check out what his tail looks like.