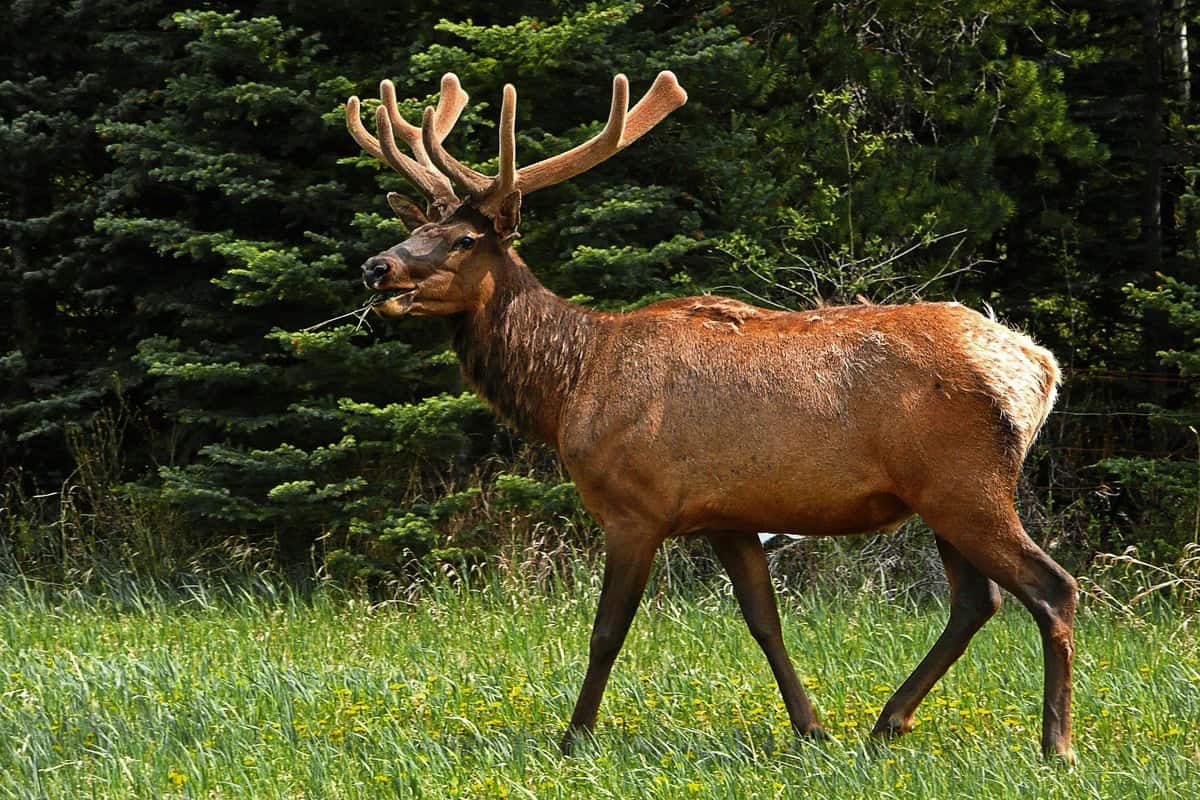 The elk or wapiti (Cervus Canadensis) is one of the largest terrestrial mammals in North America and eastern Asia and the most highly evolved Old World deer. In the Cervidae family, this majestic creature stands second only to the moose, reaching a shoulder height of up to 5 feet and a weight of up to 700 pounds.

But, do not be fooled by the elk’s large stature as their slender legs can outrun many different predators. In fact, they rely on this skill as their primary form of protection and defense. What’s the secret to a wapiti’s impressive speed and agility? Continue reading while Floofmania explores all there is to learn all about elks and running!

How Fast Can An Elk Run?

Elks are among the fastest land animals on earth and can run up to a maximum speed of 45 miles per hour, presumably over short distances. In comparison, the fastest recorded speed of a racehorse falls just under 44 miles per hour.

Over rough and uneven terrain, elks that are used to diverse habitats would easily outrun a horse in a race.

Generally, a bull (male) elk will run faster than a cow elk, their female counterparts. Bull elks’ larger hooves and more muscled legs allow them to outpace females in a sprint by a sizable margin.

Can You Outrun An Elk?

You may be able to keep up with an elk for a short sprint if both of you begin at a standing start as elks require time to build up their speed. However, even the fastest human on their best day cannot outrun an elk at its top speed.

Keep in mind that elks are massive creatures that can become territorial and aggressive if gravely threatened, which is why it’s best to maintain your distance on a chance encounter. You wouldn’t want these agile beasts chasing after you, that’s for sure!

How Long Can Elk Keep Running?

Elks require a little time to get started but will run at an average speed of 25 miles per hour and keep this up for half a day or possibly more.

On the other hand, they are able to reach a maximum speed of 45 miles per hour but can only sustain it in short bursts, tiring out significantly after just a few minutes of high-speed exertion.

An elk may be motivated to maintain higher speeds over a longer duration if chased by a predator, their survival instincts and their high-energy diet allow them to prolong their sprint.

But, several kilometers worth of an elk’s top-speed running will eventually lead to hypothermia and collapse. Nevertheless, nothing makes a better picture of willpower than an elk running for its life!

How Far Do Elk Move Every Day?

An elk on the move will mainly travel between the areas where it feeds during early to mid-fall and the habitat where it rests and sleeps. If you’re planning on tracking elks as they transition between areas, prepare for a long walk as they cover great distances to reach their destinations, usually dozens or more miles.

Furthermore, elks travel the most distance during winter, migrating to areas of lower elevations and better coverage. A migrating elk will travel up to 50 miles a day to reach its winter ranges which are remote locations with access to forage and low disturbance like wooded slopes or dense woods. You will require a lot of determination if you want to keep up with these beautiful beasts.

Why Do Elk Run?

Most of the time, an elk runs because it is spooked or senses a threat that triggers its flight response. Running is an elk’s best defense against danger, its speed allowing it to put as much distance as possible between itself and its would-be predator.

When fleeing, elks usually run off as a herd and collectively follow the lead cow along the designated escape route. If there is one mantra the elks live by it’d be that there is always strength in numbers!

In addition, elks will also run at a sustainable speed of 10 to 20 miles per hour to cover long distances and navigate through rough terrain with ease. They can maintain this pace for the rest of the day and can even hike up the speed to 30 miles per hour if a threat presents itself.

During mating season, bull elks are also observed to routinely gallop in short sprints to gather up wandering cows or chase after rival bulls rearing for a fight. In short, a running elk is an elk on a mission!

How Do Elk Run?

The running gait of elks varies depending on the terrain they’re traversing or their cause for running. For the most part, you can identify a running elk by their stiffened necks and the upright carry of their heads. Their antlers will also be tilted back in a way that resembles a bugling elk, the main beams parallel to their backs.

When an elk runs at top speed it is called a hard gallop, with their back feet pushing through their grounded front feet and thrusting them forward in a momentary airborne leap.

Sustaining such a physically taxing gait for animals as large as elks would quickly deplete their energy and are thus rarely observed in its fullest glory, often modified by elks to be more sustainable over longer periods.

For instance, heavy bull elks in a hard gallop do not bring their back feet to meet their front feet completely and have shorter leaps than lighter elks, choosing to make up for it with quicker footwork.

Lighter elks such as cows and calves are the ones commonly observed performing the leaping gallop. It is a graceful locomotion where one front foot is grounded while the other is bent, with the back legs pulling ahead to initiate the next touchdown.

An elk’s slender and strong legs make them remarkable jumpers, capable of leaping up to eight feet. When elks use the leaping gallop, they are able to cover considerable distances and plow through thick brushes and uneven terrain swiftly.

Usually, lighter elks will use this leaping action when in a hurry to rejoin their herd if they get separated or when they are trying to escape a stalking predator by jumping into the brush.

A spooked elk, usually a young bull or an older cow, will run in a short gallop, a motion succinctly described as a “stiff-legged” leap. This kind of gait is inefficient in flat, open grounds but works great in rough and brushy terrains!

An elk using the fast trot often appears like it’s simply walking fast. This energy-conserving run can be maintained over extended periods and is useful when plowing through thick brushes or crossing expansive areas.

Do Elk Keep Running Fast, Or Do They Run In Sprints?

Elks cannot maintain high speeds over long intervals as it consumes a hefty amount of energy. Instead, they run at an average speed of about 20 miles per hour in a fast trot, punctuated with bursts of top-speed galloping when the need for a quicker pace arises. In this sense, you can say that elks are both sprinters and marathoners!

Why Elk Are So Good At Running

American elks descended from elks that lived through and survived pursuit by predators and harsh and unforgiving landscapes for most of the species’ existence.

Speed is one of the highest survival needs for an elk, and their bodies have evolved over the years to accommodate this. Elks of today are practically built for speed, their slender and muscled legs perfect for galloping and trotting.

In addition, the efficiency with which they use their running gaits in response to varying situations, sustained by their energy-rich diet, have allowed them to maximize this ability to suit their needs.

Another feature that helps elks run well is how evenly spread out the two cleats of their broad hooves are, allowing them to run through wet terrain without getting disrupted or sinking to the soft ground.

The two toes located on the back of their legs also aid in balance and grip during running, increasing their efficiency over rocky and uneven ground.

Elks being excellent runners have allowed them to thrive in various environments, increasing their chances of avoiding danger and traversing rough terrains better than most land animals.