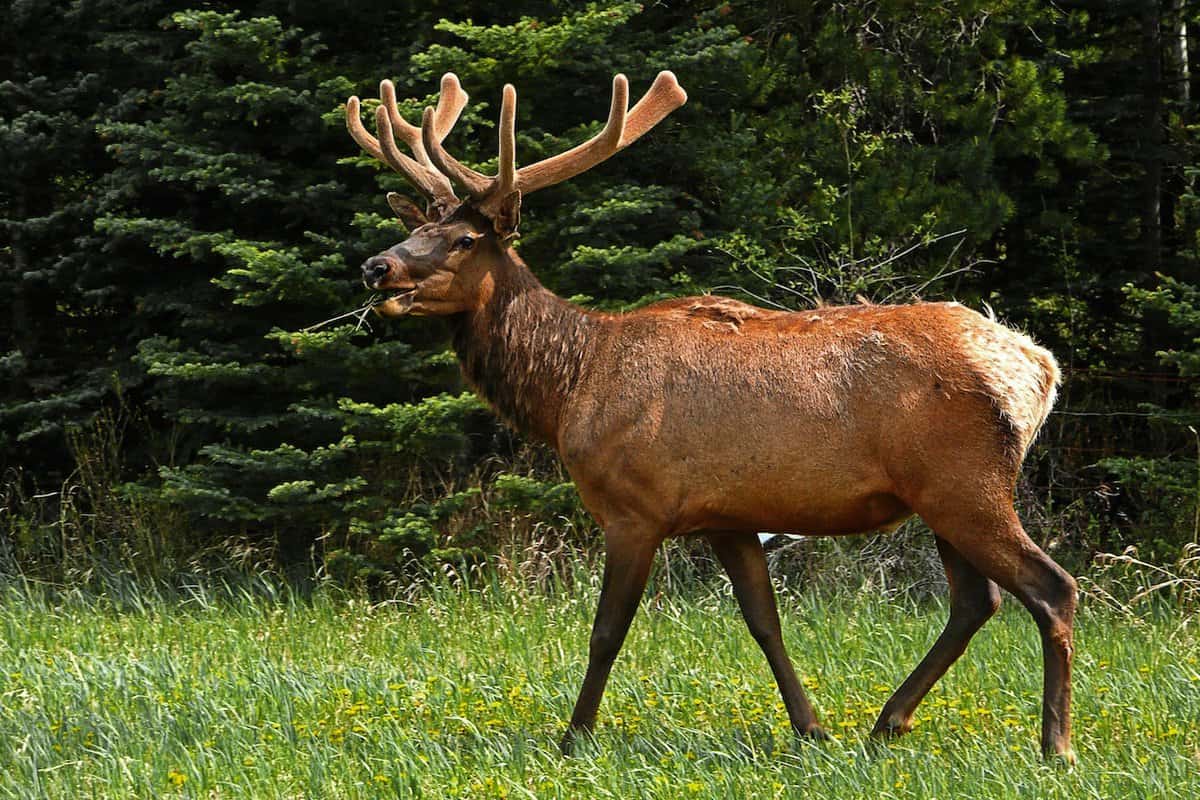 The Cervus Canadensis, or simply elk, are generally regarded as large and majestic animals. Originally known to the Shawnee and Cree as wapiti, the elk is one of the biggest deer species on earth.

In some Native American cultures, elk are revered as creatures of spiritual significance and held in high esteem. They are truly an iconic symbol of the American wilderness.

How Big Are Elk?

On average, most elk stand about 4-5 feet (1.3 to 1.5 meters) high at the shoulder, with males being heavier and bigger than the females. They can even weigh twice as much as females.

Imagine the height of a normal-sized sedan. That’s roughly how tall elk are at the shoulder.

If you count the head and the antlers, a full-grown buck can be as tall as 9 feet (over 2.5 meters)! They have thick necks and bodies. The antlers are known for growing on males only and can reach up to 5 feet wide from tip to tip.

How Big Is A Full-Grown Elk Compared To A Person?

With the elk’s height at the shoulder reaching to 4 to 5 feet, a person with an average height of 5 feet 9 inches can see eye to eye with the elk. However, it appears that’s the only characteristic we share with elks.

Their impressive height and span of full antlers will likely tower over people. They also weigh much more than an average human.

It would be thrilling to encounter an elk in the wild and tempting to see it up close. But remember that elk are wild animals and protective of their young so it is best to keep your distance and admire the creature from afar.

How Much Do Elk Weigh?

As with most mammals, bucks (males) are larger than cows (females). Females weigh from 380 to 650 pounds (170 to 300 kilos), on average weighing a little more than a typical upright piano.

What’s The Biggest An Elk Can Get?

In terms of body mass, a number of mature Roosevelt bull elks located in Raspberry Island, Alaska reportedly weigh up to 1,300 pounds. The Roosevelt elk is one of the four existing North American subspecies of Cervus Canadensis.

While Roosevelt elks appear to be immense, the size of their antlers is a little less impressive than their elk counterparts.

What’s The Record Size Of An Elk’s Antlers?

Antler size is determined by genetics, age, health, and nutrition of the buck.

The antlers are scored by counting the antler points, tip to tip spread, the widest spread, and the inside spread of the main beams.

The Boone & Crockett Club, the oldest wildlife conservation in North America, requires a minimum of 360 points to enter their Awards Book. A massive antler rack found in 1995 currently holds the world record for a typical American elk scoring 442-5/8 points.

Are Elk The Biggest In The Deer Family?

Elk are native to North America and Eastern Asia and are one of the largest species of deer on earth. They are second only to the moose, which measures 5 feet 7 inches high at the shoulder.

The sambar deer clocks in as the third largest among the cervids.  A large deer species originally from India and Southeast Asia, it is similar in height to the elk but with slightly less body weight.

How Big Are Juvenile And Baby Elks?

Baby elks typically weigh around 30-35 pounds (15 kilos), when they are born. They are scentless, which helps to protect them from predators, and have little spots on their fur that serve as camouflage.

In the next few weeks of its life, the calf will gain about two pounds (or a kilo) per day. At about six months, the juvenile calf loses its spots and is as big as an adult white-tailed deer, around 130 pounds (59 kg). They stay with their mother until the next baby elk comes along the following spring.

When Are Elk Fully Grown?

Bull elk reach their full growth at about 7 years old, standing 5 feet at the shoulder and 9 feet if you count the antlers too. They could weigh as much as 1,100 pounds (500 kilos) in their prime.

Female elk also referred to as cows, are usually able to reproduce when they are around 18 months old and weigh at least 430 pounds (190 kilos). They reach full maturity at 3-4 years old.

Despite the hefty weight and the crown of antlers, adult elks are hardly slow-footed. They can easily outrun a human being at running speeds of 40-45 mph.

How Big Are Elk Compared To Other Animals?

The moose and elk are at the top of the list when it comes to the largest of the deer species. They are often mistaken for each other because of the antlers and the coat color.

A single moose stands a foot or two taller and weighs significantly heavier than an elk, around 1,500 pounds (700 kilos). While elks can run fast, moose like to keep it calm and are more sedentary.

At first glance, there doesn’t seem to be much of a difference between elk and caribou.

While caribou are also cervids, they are smaller in size than elk. Adult bulls weigh 375 pounds (170 kilos) on average, females at about 200 pounds (91 kilos). But in terms of antler size, the caribou takes the trophy.

Caribou are the only members of the deer family where male and female individuals both have antlers. Caribou antlers are enormous compared to the size of the body. They grow each year in March and in less than 120 days have a full set to use for rutting.

Moving away from the deer species, let’s compare elk with a large domestic animal we know and love: the horse.

Like dogs, the size of horses varies widely by breed. For comparison purposes, let’s consider a typical farm horse, the Clydesdale.

A Clydesdale is taller than an elk, usually higher by a foot at the shoulder. Some adult males are even larger and can weigh as much as 2,000 pounds (907 kilos) which is quite a lot more than the 700 pounds (317 kilos) of an average elk.

Bison are North America’s largest land animals and the national mammal of the United States. Most bison are raised as livestock on ranches and a smaller number are managed for conservation.

Adult male bison weigh over 1,500 pounds (700 kilos) and are 6 feet tall at the withers, the ridge between the shoulder blades which is the standard place to measure its height. Elk are much smaller compared to them and less bulky looking.

As the largest land mammal, it is even bigger than the moose and the massive grizzly bear.