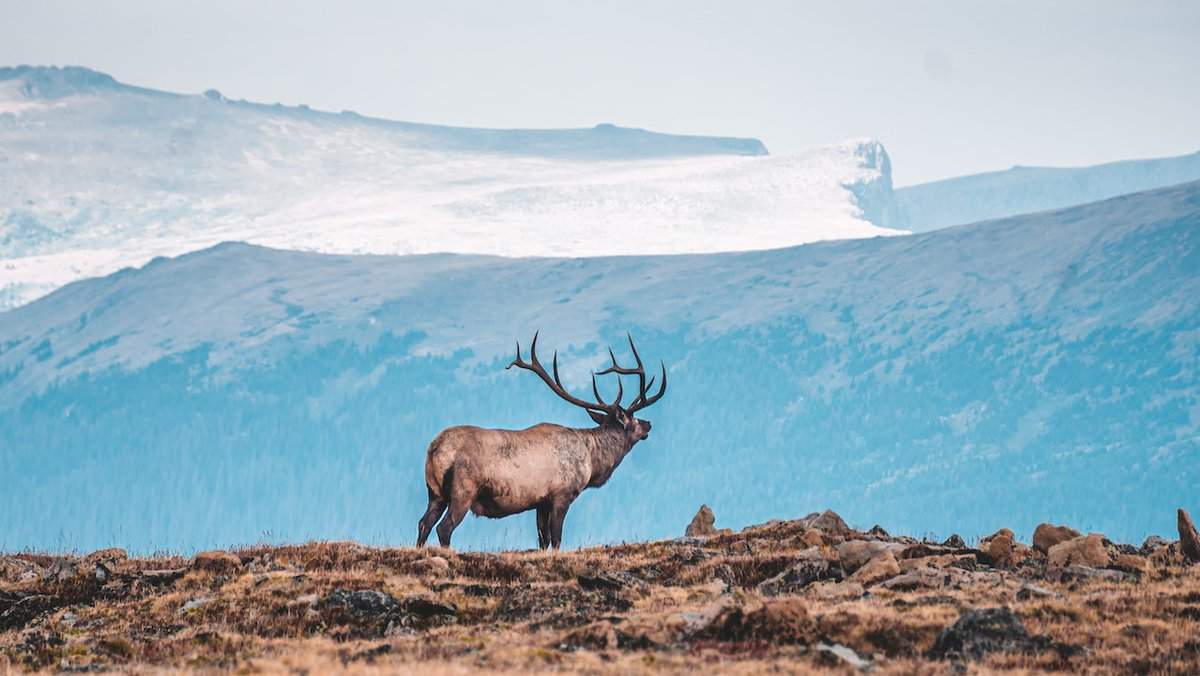 Elk are also known as wapiti, a Native American word for light-colored deer. These eye-catching animals are famous for their magnificent antlers and ivory teeth.

They are found in Eastern Asia and North America, specifically in the rocky mountain areas and the bordering parts of southern Canada. Currently, they primarily roam in the region of Yellowstone National Park.

These incredibly social animals are arguably the most popular and majestic creatures in the wild. Let’s learn more about these amazing species and determine their closest relatives!

What Kind Of Animal Is An Elk?

Elks are under the family of Cervidae or also known as the “deer family,” because the members of this family are deer or cervids. We can conclude that all elk are deer, but not all deer are elk.

Considering their biology, elk are a member of the classic red deer group. They are the largest red deer subspecies.

Male elks (bulls) have big and impressive antlers. These are fast-growing bones that can grow up to one inch each day in the right season. The elk’s antlers also help it regulate its temperature in hot weather by circulating the animal’s blood throughout the antlers, making for a much bigger surface area for the blood to cool down through conductivity.

The scientific name of elk or wapiti is Cervus Canadensis. They are under the genus of deer called Cervus, meaning ‘horned’ or ‘deer’.

The Canadensis, in its scientific name, is a Latin term that means Canada. This is used to identify species that are strongly associated with Canada, like the North American Beaver, or “Castor Canadensis”.

Are Elk Herbivores, Omnivores, or Carnivores?

Elks are herbivores. Their diet mainly consists of grasses, shrubs, twigs, and other plants. On average, an elk needs to forage 21 to 33 pounds (9.5 to 15 kg) of food daily.

However, elks are not strictly herbivores. At rare moments, they are found to eat something that’s not part of their usual menu and eat the small eggs of greater sage-grouse if it is more available.

Sometimes, they will also eat bones and antlers to supplement their energy and provide them with the crucial calcium and minerals they need for their own antlers.

Regardless, elk are still considered herbivores and not omnivores because they mostly eat plants and can only handle a small amount of non-plant foods. Their digestive system is highly specialized for breaking down plant-based diets.

Are Elk Considered a Keystone Species?

Yes. Elks are considered a keystone species in the Yellowstone National Park. Keystone species are animals that are crucial for the local ecosystem, which would change drastically without them.

Elk play a vital role in their environment. The abundance of elk affects the composition of both the predators and plants of their community. This is mainly because these gorgeous and stoic animals are the primary food source for predators in the area.

Does There Exist Different Subspecies Of Elk?

Yes, there are at least six subspecies of elks from North America and four from Asia. Here is the list of the subspecies of elk found in the United States, their scientific names, and their location:

Merriam elks are an extinct, larger subspecies of elk with dark black noses. They used to be found in Arizona and New Mexico.

Rocky Mountain Elk are the most widespread elk species with yellowish-orange rump patches and dark brown to black fur. They are found west of the Mississippi River.

The Roosevelt Elk are the largest among the subspecies of elks. They are located primarily in Oregon and Washington.

Tule elks are known for being the smallest among the subspecies of elks. They also have even-toed or split hooves. These are elk subspecies that can only be found in central California.

Manitoban elks have smaller antlers compared to the other subspecies of elk. They were almost driven to extinction in the 1900s but were since able to recover. They wander across the border of the Great Lakes State in Manitoba and Saskatchewan.

Both of these species have majestic antlers, one of their most common features. Both animals share a similar diet of shrubs, tree leaves, and grass.

However, their major difference aside from the size is that elks have long fur on their necks (mane) while Thorold’s deer don’t. They also differ in location because Thorold’s deer are found in the Tibetan Plateau in South Asia.

What Other Animals Look Similar to Elks?

There are many animals that look similar to elks. Here are some of the most familiar animals that people confuse with elk:

Reindeer or Caribou are easily mistaken for elk because of their apparent similarities, especially in the size of their antlers. While the elk is bigger, both animals are quite large, which makes it tricky to distinguish them from one another if you’re not used to seeing them up close.

If you look closely, you can identify that elks have a brown and reddish hue to their fur. On the other hand, reindeer are slimmer and their color varied from white to almost black.

The diet of caribou and elk is almost the same, although reindeer have been known to occasionally consume small mammals like lemmings.

The easiest way to tell elk and red deer apart is from the colors of their coats. Red deer have a rust-red color that is prominent during summer and turns brown during the winter. On the other hand, the colors of elk’s coats are darker shades of brown.

In addition, elk have a long, blackish mane on the neck area all year-round, while red deer only grow short neck manes during autumn.

Chital and Elks are both grazers and eat various plants throughout the year. They both have strong and large antlers.

Their primary difference is their color. Chitals are distinguished from elks because they have a lighter brown color with white spots, earning the name spotted deer.

There is a general difference between elks and other species of deer. The first characteristic to take note of is that elks are generally larger.

The antlers of elks are also prominent and curved towards their body, while other deer’s antlers are spiky and shorter, branching towards their face.

Elks run faster with a speed of 45 miles per hour, while the average rate of deer is 30 mph. The tracks they leave also differ because elks imprint two circular parallel halves while other deer leave a delicate heart-shaped print.

Elks are also vocal animals which sets them aside from others. They are the loudest species among the deer family, with their high-pitched roar called bugling. Other deers only make grunts, snorts, squeals, and bleats.

Are Elk And Moose The Same Animal?

Moose are one of the animals mostly confused with elks (wapiti). This is because moose (Alces alces) are also referred to as elk in British English. But it is important to remember that the European Elk species, which is close to the moose we find in North America, differs from the North American Elk (wapiti).

Both wapiti and moose are large mammals under the deer family. They are also both herbivores with amazing antlers. However, it is still possible to tell them apart. Listed below are some of the key points that set them apart from each other: