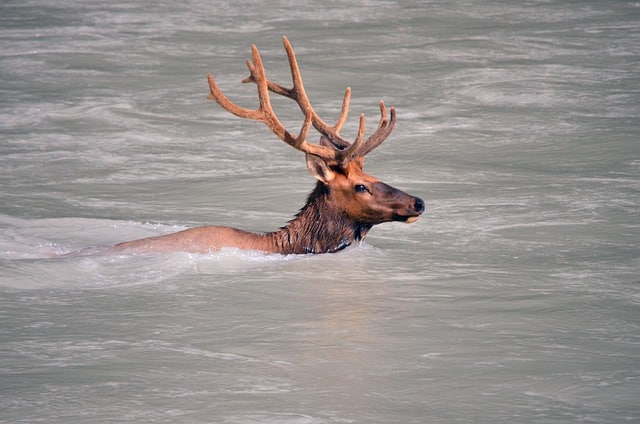 One of the most remarkable animals coming from the deer family is the elk. These animals are found only in select parts of the world, such as North American regions and certain parts of Asia.

Elk and other species in the deer family often live in extreme habitats, and this has forced them to develop certain skills for survival. Interestingly, one of these is swimming, although not many people know about this unique capability.

Elk are strong swimmers that can get across almost all bodies of water, whether freshwater or saltwater.

They can swim for miles on end without developing a risk for hypothermia, thanks to their high body fat percentage as well as their thick coat consisting of hollow individual hairs that also help keep them afloat.

This natural endurance is a wonderful skill that elk have developed in order to protect themselves from predators such as wolves and wild bears. Since these predatory animals prefer hoofed creatures like elk and deer, elk have, over generations, learned to retreat into nearby bodies of water to keep their attackers at bay.

While elk can run fast, with speeds averaging 25 miles per hour and even topping 45 miles per hour, they do not swim as fast. For one thing, their large build slows them down, along with often strong currents in the water.

But, while they may not swim at Olympic speeds, elk can swim very efficiently.

How Long Distances Can Elk Swim?

Adult Elk can swim for up to three miles at a time. They are easily able to power through high currents and long distances. This helps them, especially during their annual migration, wherein elk herds need to swim across deeper waters due to spring run-off when the winter snow melts and raises the water levels.

Even days-old elk calves are taught to become good swimmers and can swim for a couple of miles, easily building their endurance over a couple of weeks.

However, while elk are generally excellent swimmers, they are not immune to drowning especially when swimming across new, unfamiliar waters.

Can Elk Dive and Swim Underwater?

Elk are known to dive to the bottom of a deep pond, reaching depths of up to 20 feet (6 meters), especially when in search of food.

Like moose, elk are capable of diving and swimming underwater thanks to their large nostrils that act like valves keeping water from getting into their lungs, not to mention their thick tails that act as rudders.

How Long Can Elk Hold Their Breath?

Elk are surprisingly amazing swimmers and can hold their breath for a full minute underwater. This is thanks to their particularly large nostrils which serve as valves that keep the water out as the elk dives underwater to swim and hunt for food.

Why Do Elk Swim?

Elk swim for a variety of reasons. Initially, elk developed this ability in order to escape predatory animals in the wild. They also often need to traverse bodies of water when migrating. Of course, there’s also the fact that elk need to drink a staggering four gallons of water each day.

Plus, if nothing else, elk sometimes like to swim in order to cool off during the hot summer months.

How Elk Use Swimming For Finding Food

Elk are herbivores. While they mostly eat grass, shrubs, twigs, and tree leaves, elk are also known to hit the waters in search of nutrient-rich aquatic plants, especially during the fall season when fresh leaves are hard to find.

Did you know that, on average, an elk needs to eat an average of 27 pounds of food every single day? That equates to around three pounds of food for every 100 pounds it weighs.

Will Elk Go In The Water To Cool Down?

It’s not surprising that like us humans, elk are partial to taking a dip in a body of water to cool off during the summer season. They love freshwater and saltwater sources alike, but are especially fond of the sea and enjoy venturing into the water to ward off the hot summer sun.

This is why, if you live by the coast of an elk-populated area, it’s not uncommon to see an elk wandering down the beach to take a dip.

Would Elk Rather Swim Over A River or Walk?

Any elk would prefer to swim in a river rather than walk around it, primarily for safety purposes against their known predators in the wild. Besides, if they swim, not only do they protect themselves, but they also get to cool off and even dive for some nutrient-rich aquatic plants.

How Often Do Elks Go In The Water?

Elk are likely to dive into water channels often during the summer season in order to cool down because their thick coats make them prone to experiencing increased perspiration.

That said, elk do not go into the water for drinking it. They stay on land and drink to their heart’s content, averaging at about four gallons of water per day – more if it’s particularly hot and the days are long.