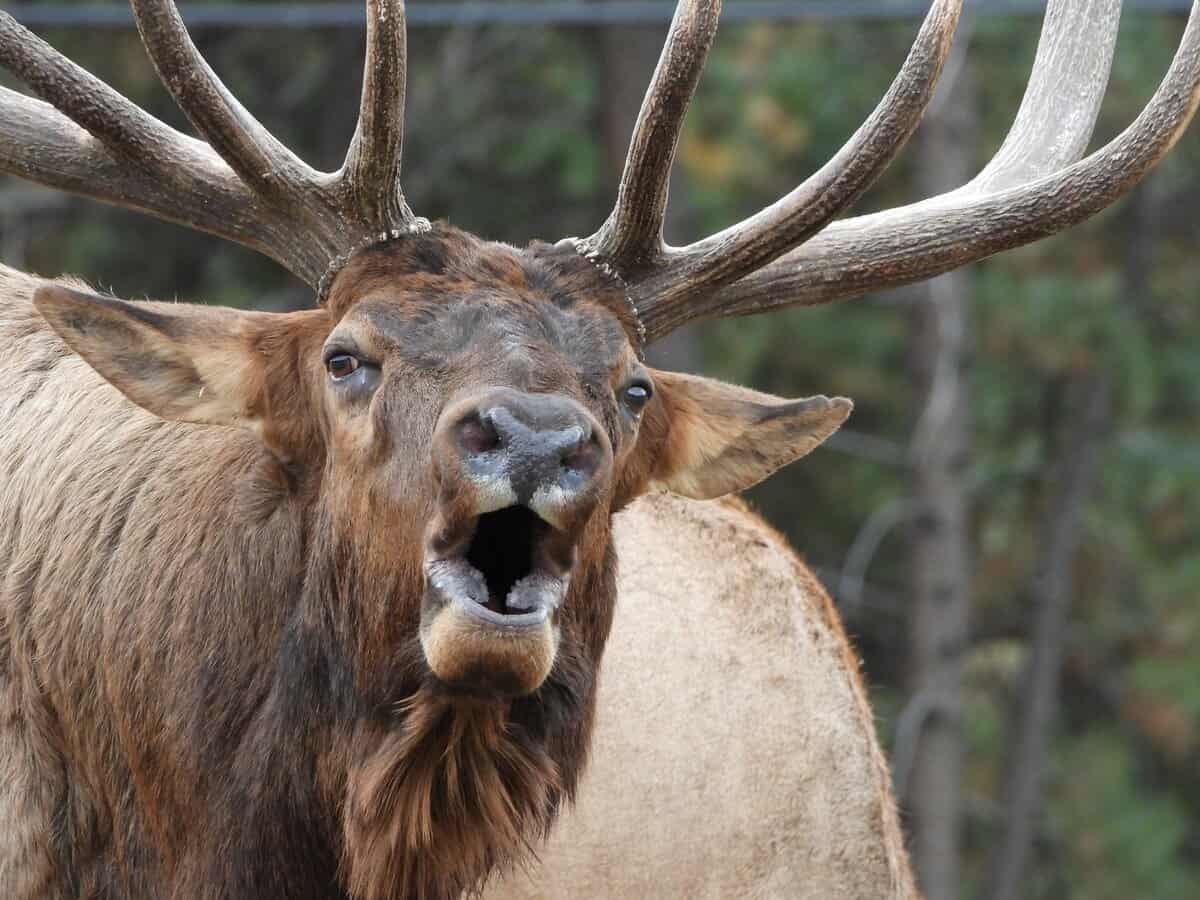 Elks are the largest subspecies of red deer found in North and Central America. They are also called wapiti, which means “white deer” in the local American languages. Wap in their name also refers to their white tail and rump characteristics.

Aside from their elegant antlers, elks are also famous for their authentic ivory tusks. For generations, the most valuable things found in elks were their ivories.

Let’s learn more about their magnificent teeth, and determine how the elk uses them.

What Kind Of Teeth Do Elk Have?

Elks also have incisors located at the very front of their bottom jaw. These are the counterpart of the bony palate in the front jaw. They use their incisors to cut the plants with the assistance of the rough palate in their upper jaw. Between the premolars and incisors is a gap or an open space with no teeth.

In the back of their mouths, elks have large molars and premolars that are useful for chewing. Elks will grow two sets of premolars in their lifetime.

The first is their baby molar teeth appearing when they are still calves. The permanent premolars will grow and push the milk teeth when the elks reach the age of 2 and a half years.

Contrary to premolars, elks only grow one set of molars in their lifetime. Their first molar will show when they are 6 months old, and the other two will emerge when they reach the age of 1 and half years old.

Do Elk Have Canine Teeth?

Yes, the American or rocky mountain elks have two upper canine teeth found in the maxilla or upper jaw. The small, deciduous canines or baby teeth will appear during 2 to 5 weeks old in baby elk (calves) and will be shed after one year.

The milk teeth will eventually be replaced with permanent canine teeth. After the first year, the canine crown is fully developed, but the teeth area is not yet fully exposed. The teeth will slowly begin protruding from the gum line over time.

The canine teeth roots will start their formation along with the other teeth but they grow in fully in a different way. With cows (female elk), the roots will be fully developed during their second year, while it is the third year for bulls (male elks).

After some time, dark-brown stains are observed in the gum base of the fully developed canine teeth of elks which form as they forage for food.

Are Elk Teeth Similar To Ivory?

What Are Elk Teeth Used For By People?

The ivory teeth are a valuable treasure for hunters as they consider them a trophy and a way to honor the elk’s life. For thousands of years, the Plains First Nations people also cherished elk canine teeth highly. It is known as a prized commodity useful for trades.

The ivory teeth of elks were carved and polished into pendant beads widely used to embroider both women’s and men’s outfits. The pendants are pierced in the root part of the tooth, where it will be sown to the dress or where a string will be put to make a necklace.

Do Both Male and Female Elk Have Ivory Teeth?

Yes, both male and female elks have ivory, although the features of their ivory teeth differ. The male’s ivory teeth are usually heavier, wider, and more prominent compared to the female’s teeth.

Aside from that, here are some of the major differences between the ivory teeth of the bulls and cows:

Did Elk Use To Have Tusks?

The elk’s earliest relatives actually had ivory tusks sticking out of their jaws. Elk ivory teeth are the relics of ancient tusks that were formerly 6 to 8 inches long (15 to 21 cm). They are found on the upper jaw, close to the front of the mouth.

Prehistoric elk used their tusks to establish dominance during mating season and to defend themselves from predators.

Their tusks gradually evolved to be smaller because their antlers became bigger. Elk’s ancestors had much smaller antlers than modern elk, but as time passed, the antlers developed into the magnificent racks that are more attractive for mates, intimidating for rivals, and helpful in regulating the elk’s body temperature.

Since antlers are more practical to keep and are a stronger defensive weapon, elks no longer required tusks. As time passed, the elk’s tusks became the smaller ivory canines we know today.

What Do Elk Use Their Teeth For?

Elk have different kinds of teeth with respective functions; here is the list of elk’s teeth types and what they are used for:

The elk’s canine teeth are the remnants of the tusks that its ancestors had. Despite elks no longer having tusks, they still have their instincts to use them to threaten predators and other dangerous animals.

Elks use their ivory teeth to menace and threaten their predators. If frightened, the elk will start to grind or clack their teeth. This is called a biting threat.

If the danger does not disappear, the elk will snarl, elevate its head, flatten its ears, hiss, and display its ivory teeth at the source of danger to appear frightening.

Elks don’t have other uses for their ivory teeth aside from intimidation. They cannot use them to cut or chew foods because they’re only a small remnant of the tusk and already functionless.

The front teeth in the bottom jaw are used to cut and collect grass and other plants that the elk eats.

Unlike other animals, elk do not have upper incisors. The counterpart of the lower incisor is a bony pad, which they can use as support when they grab and break their food.

Premolars are the first three teeth on the side of the jaws after the incisors. The premolars are used to help break and grind the foods into smaller bits.

On the other hand, Molars are the last three cheek teeth. They allow vigorous chewing of food, especially when ruminating cud, and are usually wider than premolars.

How Do Elk Use Their Teeth?

Generally, elks use their teeth to cut, break down, and chew their food. The only pair of teeth that they use to frighten their predators and rivals is their ivory canine teeth.

How Big Are Elk Teeth?

Lastly, the ivory canine can vary in size. The canine teeth of bulls are usually 1 inch (2.5 cm) in length and width, while the cows have only half of the width.

Yes. Like other herbivores, some of their front incisors are sharp enough to cut grasses, twigs, and other plants.

The crown of their premolar and molar teeth are also sharp; however, there is still a wide and flattened portion behind the sharp part. They use their premolars to chew and mash their foods efficiently.

How Many Teeth Do Elk Have?

Do Elk Sometimes Lose Their Teeth?

The only sets of teeth that will only grow once in their lifetime are the molars. The first set of elk’s molars is already the permanent teeth.

Can Elk Teeth Grow Back?

No. Elks can only grow back the baby teeth that they lose (by replacing them with permanent teeth) The permanent ones only grow in once. By the time elks are 3 ½ years old, they’ll have a complete set of permanent teeth.

Similar to humans, permanent teeth cannot grow back once they have fallen out. Their teeth are not made of living tissue, so they cannot regenerate.