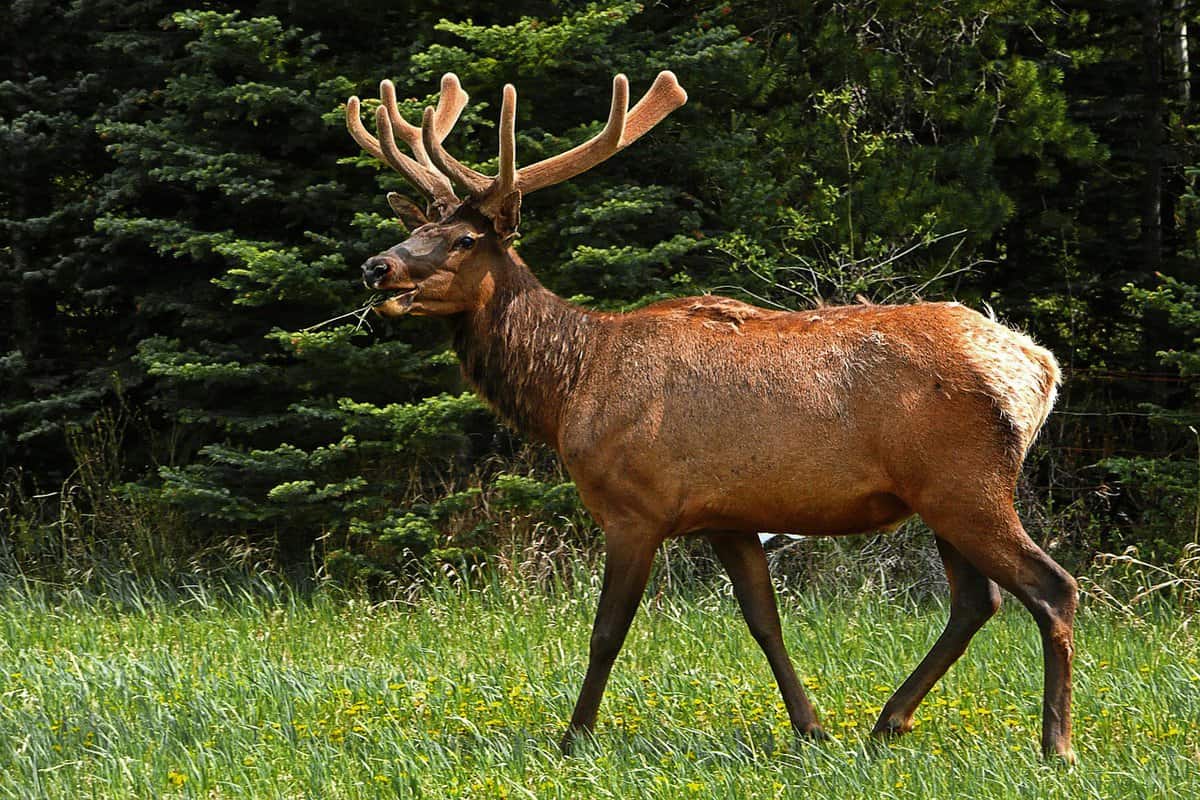 For hundreds of years, the elk has been an iconic symbol of the American west providing recreational opportunities for wildlife enthusiasts, hunters, photographers, and artists.

Currently, the elk is one of the largest species in the deer family. It is also called the Wapiti which means “light-colored deer” in the Native American language Shawnee. They are majestic!

Where Can Elks Be Found?

Elks are mostly found in North America, and Central and Eastern Asia. They are native to these areas.

In the US, elks are found in approximately 24 states. They can also be found in certain parts of Europe and have been introduced in other countries like Argentina, Chile, Australia, and New Zealand, where they are mostly bred for meat.

Are Elks Native To North America?

Elks are native to North America, specifically, the US and Canada. The bulk of their population is in the US while a decent-sized population lives on the western and eastern sides of Canada.

There are six subspecies of elks in North America, including:

What Kind Of Environment Or Habitats Do Elks Prefer?

Elks do not have one area of preference when it comes to habitats. They thrive in forests, forest edges, upland moors, open woodlands, mountainous areas, coniferous swamps, clear cuts, open meadows, and subalpine areas where they feed on plants, bushes, tree bark, leaves, and grasses.

Are There Elks In My State?

The Elk population in the US once numbered millions. Today, they can only be found in a little over 20 States, mostly in protected areas where they are safe from hunters.

Elks did not originally live in Alaska but through population revival efforts, elks were successfully transplanted into the area.

Currently, there are about 400 Roosevelt elks and rocky mountain elks in the state. 70% of the population live on Etolin Island while the rest are on Zarembo island.

There are a few elks found on other islands too but the numbers are very low.

According to the Arizona Game and Fishing Department, the state’s elk population today is around 35,000.

The Arizona landscape is the perfect location for rocky mountain elk.

There are only around 450 elks in Arkansas today. They are on the verge of extinction in the area so a big conservation effort is in place to ensure that they do not disappear.

A Decent Number Of Elk Herds In California

The Largest Elk Population Is In Colorado

Colorado has the highest number of elk in the country with about 300,000 rocky mountain elks. They are mostly found in the state’s national forests and the Rocky Mountain National Park.

Idaho Has A High Elk Population

Idaho is one of the states that has a healthy number of elks with around 120,000 individuals today.

Elk numbers in Kentucky used to be very low but they are one of the states that were successful in their restoration efforts. Today, there are around 16,000 elks in the state.

The state of Michigan only has around 1,000 wild elks that live mainly in the Pigeon River Country State Forest in the Northeast peninsula.

Minnesota only has 126 animals as of today. Hopefully, the state will increase its efforts to bring the numbers up before it’s too late.

Critical Levels of Elk In Missouri

There are only about 100 – 200 elks in Missouri. The number used to be higher but because of diseases and high calf mortality, the population has gone down dramatically.

A Healthy Population Of Elks In Montana

Montana was successful in their elk population recovery efforts. They now have around 170,000 elks roaming around. Way to go, Montana!

New Mexico has around 90,000 elk statewide, 7,000 of which live in Jemez mountains and about 2,500 in Valles Caldera National Reserve.

The rest of the herds live along the Sangre De Cristo ranges, the southwest region, and the south-central portion of the Sacramento mountains.

There are only about 100 – 200 of the Manitoban subspecies left within the Great Smoky Mountain National Park in North Carolina.

The elk population is slowly rising and they now have about 5,000 animals and counting in Oklahoma, thanks to their efforts in reviving the population.

The 5th Largest Population Is In Oregon

Oregon is the 5th state with the largest population of elks in the country with over 125,000 animals. The bulk numbers are found in western Oregon in the Coast ranges, Cascade ranges, and Blue Mountain ranges.

There are approximately 1,400 elks in Pennsylvania mostly found in their protected park, Elk State Forest.

There are only a little over 400 elks in Tennessee but conservation plans are in place. Elks in Tennessee are exclusively found in the North Cumberland Wildlife Management Area near Knoxville.

The Elk population in Texas is around 1,600 and slowly rising. Strict hunting rules and regulations are in place to make sure the number does not decline.

Utah has a healthy number of 68,000 elks where the bulk of the population of about 12,900 live in the Manti unit in central Utah, 7,800 in the Plateau unit in Southwest Utah, and about 6,000 in the Wasatch Mountains in north-central Utah.

According to the Department of Wildlife Resources, there are only over 250 elks in Virginia. A critically low count if you ask me.

The state is closely monitoring its population and is doing everything it can to increase its numbers.

There are approximately 4,700 elks in Washington and they are fast declining due to poaching and the destruction of habitats.

There are 10 different elk herds in Washington including the Blue Mountain elks, Roosevelt elks, and Rocky Mountain elks.

West Virginia perhaps has the lowest population of elks in the country with only around 85 animals roaming around the rugged mountains of the state.

It is unsure if the reason they have very few elks in the state is the lack of habitat, diseases, or lack of effort of the state and local government.

There Are Few Elks In Wisconsin

Wisconsin only has 300 – 400 elks found in the areas surrounding Clam Lake and Black River regions.

The Wisconsin landscape is a good fit for elks, they should thrive in the state. Unfortunately, Wisconsin is one of the states that has a very low population.

The US States Where There Aren’t Any Elks

These are the following:

While elks aren’t exactly a threatened species, their numbers aren’t as impressive as they were historically, and one can only hope that efforts will be made in the future to reintroduce them to states where they existed in the past.

Are There Elks In Canada?

Canada is big on the conservation of its native animals. The same is true with their elk preservation. In fact, Canada established an Elk National Park located in Saskatchewan, Alberta.

There are about 72,000 Rocky Mountain elks in Canada. As for Roosevelt elks, most of them can be found in British Columbia with an estimated population of 40,000.

There are around 20,000 elks in the rocking foothills and some in National Parks in Banff, Jasper, and Waterton.

Are There Elks In Latin And South America?

Elks are not native to Latin and South America but were introduced to Argentina and Chile in the early 20th century, mostly for recreational hunting purposes.

A Booming Elk Population In Argentina

There is no exact headcount as to the current population of cells in Argentina but the numbers are so high they are now considered an invasive species.

Because they were transplanted, elks in Argentina do not have natural predators. Without predators, overpopulation is bound to happen as it already has in the country.

Elks are competing for food and habitat with Argentina’s native wildlife which is considered a problem. Elks must love Argentina!

Uncontrolled Number of Elks In Chile

Elks were introduced in Chile around the same time as Argentina where they adapted so well to the weather and ecosystem that they ballooned in numbers.

Chile’s elk population is critically high and it is threatening the indigenous wildlife. Today, elks are considered one of the world’s 100 worst invasive species.

Hunting has been encouraged to help control overpopulation and its negative impact on Chile’s native wildlife, but there’s a long way to go.

Are There Elks In Europe?

There are elks in some parts of Europe. At least, that’s what the Europeans call them. Strictly speaking, the Eurasian Elk is much closer to the animal that Americans refer to as moose.

The European elk are mostly found in northern and eastern Europe including:

There are fewer European countries where elks are found, unfortunately.

Are There Elks In The Rest Of The World?

Elks are found in a few other parts of the world. There is a growing population in Australia where elks thrive and are considered an invasive species.

There is also a small population of Roosevelt elks in New Zealand found on George Island and Fiordland on the South Island.

There are very few elk in Africa but only in nature preserves and protected parks. In Asia, elks are found only in the uplands of Mongolia and China. Hundreds of years ago, they numbered in thousands, if not millions in Asia.

Did Elks Use To Be Widespread?

Elks used to dominate many countries in the world with populations in the millions.

They used to roam widely across Asia, Europe, Siberia, and the Americas. Today they are found only in a handful of countries where they thrive in some while being threatened in others.

Destruction of ecosystems and recreational hunting have greatly affected their population and chances of survival.

Are Elks Returning To Some Areas?

Elks are slowly starting to come back and revive their population. Thanks to the conservation efforts of foundations, organizations, and countries.

Strict hunting regulations are in place in most countries to control the decline of numbers in most areas and limit the rise of population in other countries.

Most elk herds are located in nature reserves and national parks to keep them protected. It is safe to say, elks are returning to some areas but not too soon.