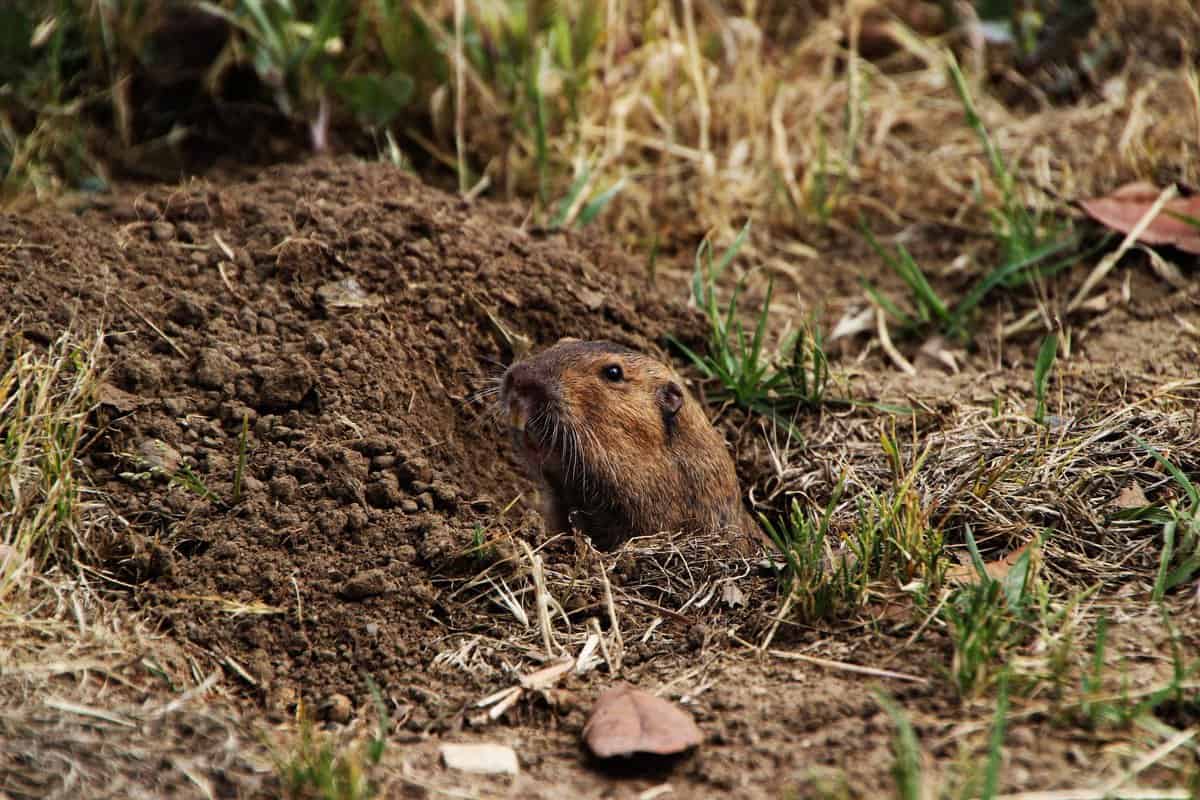 Pocket gophers, simply known as gophers, are furry little mammals that can become frequent visitors of households across North and Central America. If you ever see mounds of dirt in your backyard one morning, there is a good chance that a gopher paid your home a visit last night.

Some people may find a gopher adorable with its cute, tiny face and puffy cheeks. Although, these are likely the same people who are not yet aware of how menacing these seemingly loveable furballs can be.

Whether you’re a fan or a hater of these yard burrowers, this article will discuss everything you need to know about gophers. More importantly, you will learn about the distinct traits that set the gophers apart from other animals that share a likeness with them.

What Kind Of Animal Is A Gopher?

It’s no wonder why many people often mistake a gopher for a rat or a large mouse. Gophers belong to an order of mammals known as Rodentia. Hence, gophers are rodents, making them close relatives of other rodents that we know such as mice, rats, hamsters, and squirrels.

While gophers bear a semblance to their fellow rodents in terms of physical appearance, these mammals have a few characteristics that set them apart from their relatives. For starters, they can be further classified into a smaller group or family of rodents called Geomyoidea.

As a member of the family of geomyids, pocket gophers are known to be fossorial. This means that they enjoy spending most of their time underground. All thanks to their unique burrowing abilities, gophers can create tunnels that connect different underground chambers, where they usually hang around.

You can expect a geomyid like gophers to possess a body built for burrowing. Geomyids have stout bodies with short but powerful legs that make it easier for them to move around in underground tunnels. They also have broad feet, but what really contributes to their digging capabilities is their enlarged claws. They have highly-developed claws on their front feet, which they use to dig big holes in the ground.

Gophers are called “pocket gophers” because of a unique feature that not even other geomyids have: cheek pouches. They use these pouches generally for transporting their food. These cheek pouches extend from the sides of their mouth to their shoulders.

The scientific name of the pocket gopher is Geomys bursarius. “Geomys” comes from the name of the genus to which the gopher belongs. Meanwhile, “bursarius “comes from the Latin word “bursa” which pertains to a bag or purse, which alludes to the cheek pouches that gophers carry around like purses.

Where Did Gophers Come From?

Gophers are native to North America. There is little to no evidence to prove that gophers actually originate outside of the continent. It is most likely that the current 41 recognized species of pocket gophers in the continental United States have been settled in the region for a very long time. This is proven by the gophers’ lack of interest in traveling long distances to migrate.

The stretch of the Mississippi River all the way to the Rocky Mountains is where most of the species of pocket gophers are found. There are also gopher sightings reported in Texas and Northeastern Mexico, as well as in the Great Plains and the United States-Canada border.

Gophers love to make burrows a lot, so it is expected that their preferred location is somewhere where they can dig the ground easily. Hence, the regions in North America where the soil is sandy are havens to pocket gophers.

There is also no particular climate required for gophers to thrive. In fact, there are plenty of species of pocket gophers that prefer to live in very hot and dry places like the dessert. On the other hand, there are species of gophers that like it cold, and that is why they have chosen to stay in the sandy areas near the mountains that experience extreme temperature drops.

Since gophers can live anywhere as long as the soil is easy to excavate, you can see them in a lot more places like the woods, grasslands, and meadows. They can eventually find their way to a family’s backyard, if it is accessible to them (the gopher, not the family!) through their underground tunnels.

What Animals Are Gophers’ Closest Relatives?

Out of a long list of rodents that resemble the appearance of gophers, there are only two animals that are considered to be their closest living relatives: kangaroo rats and pocket mice.

The kangaroo rat belongs to the family Heteromyidae that are native to North America, just like pocket gophers. Heteromyids and geomyids share a bunch of similarities, including an intertwined biogeographical history that links the two families together.

When it comes to kangaroo rats and gophers, which belong to the aforementioned families of rodents, their main similarity is the fur-lined external cheek pouches.

The same thing goes with the pocket mice, which belong to the family Muridae. A pocket mouse also has the same cheek pouch that it uses for transporting food to its burrows.

What’s The Difference Between A Gopher And A…

Many people see the semblance of a groundhog from a gopher. Some may even misidentify one for the other because of their many similarities, most especially their habit of digging through underground tunnels.

For starters, the groundhog or woodchuck is endemic to North America, just like the pocket gopher. Although, groundhogs are more confined within the United States territory, while gophers can be found throughout North and Central America.

Gophers and groundhogs belong to the families Geomyidae and Sciuridae, respectively, which is the source of their many differences, particularly in their physical features.

While both the groundhog and the gopher create their chambers underground, each animal has its own purpose for creating these chambers. As for gophers, their burrow system is much more complex than any other animal with the same burrowing habit.

There are burrows designated for nesting, storing food, and for simply resting. Meanwhile, groundhogs only create their underground pad to sleep in. They do not use their burrows to stockpile food. Still, unlike gophers, groundhogs still spend more time above the ground surface than underground.

The ground squirrel is another animal look-alike to the gopher, although we can easily spot their differences by observing the way they live. For one, ground squirrels are more interested in consuming the fruits and leaves of a plant, while gophers crave for the roots.

Another major difference is the way ground squirrels spend most of their time in the open, above ground, while gophers prefer chilling underground. Moreover, gophers do not mind if they have no one to spend their time with, in their tunnels as they like it more when they are alone. This makes gophers the total opposite of ground squirrels as the latter prefer socializing with their fellow squirrels.

In terms of physical traits, gophers do not have the ability to stand on their hind legs, something that ground squirrels can do. Although, ground squirrels only stand that way when they feel an incoming danger and they want to look more intimidating to scare off potential enemies.

Gophers and tree squirrels are just as different in appearance as in their lifestyle.. Gophers devour plant roots and prefer to eat them underground. Although, there are times when gophers eat their food above ground, especially when the situation prevents them from going underground

As for tree squirrels, they enjoy eating their food while on top of a tree. Also, instead of choosing to live in a sandy area, tree squirrels are more common in fields, pastures, and forests. Tree squirrels prefer the amount of green that can be found in a particular place.

The chipmunk is closely related to the previous 2 rodents that we have discussed. This mammal belongs to the order Rodentia and genus Tamias, and its defining feature is the presence of dark stripes on the face and the tail. Chipmunks are also common in North America, as well as South Central Mexico. Like the tree squirrel, chipmunks also like to wander across different habitats.

A gopher belongs to the family of Geomyids, while a mole is a member of the shrew family. One big similarity that links these animals together is their ability to create underground tunnels.

Also, when they are digging holes, moles prefer using their teeth for that task. Gophers, on the other hand, rely only on their long front claws to excavate and create underground tunnels.

You can also differentiate a mole and a gopher by checking their physical appearance. Moles are a little smaller than gophers, while the nose of a mole is more pointed and hairless.

The vole is another gopher look-alike. At first glance, it may not be that easy to identify which is a vole and which is a gopher. However, if you have always been aware that the color of the fur of a gopher is dark greyish, you can identify this animal faster. The vole’s fur is light brownish or grayish.

Like moles, voles also appreciate company. They prefer hanging out as a group, as opposed to gophers who would rather choose solitude underground.