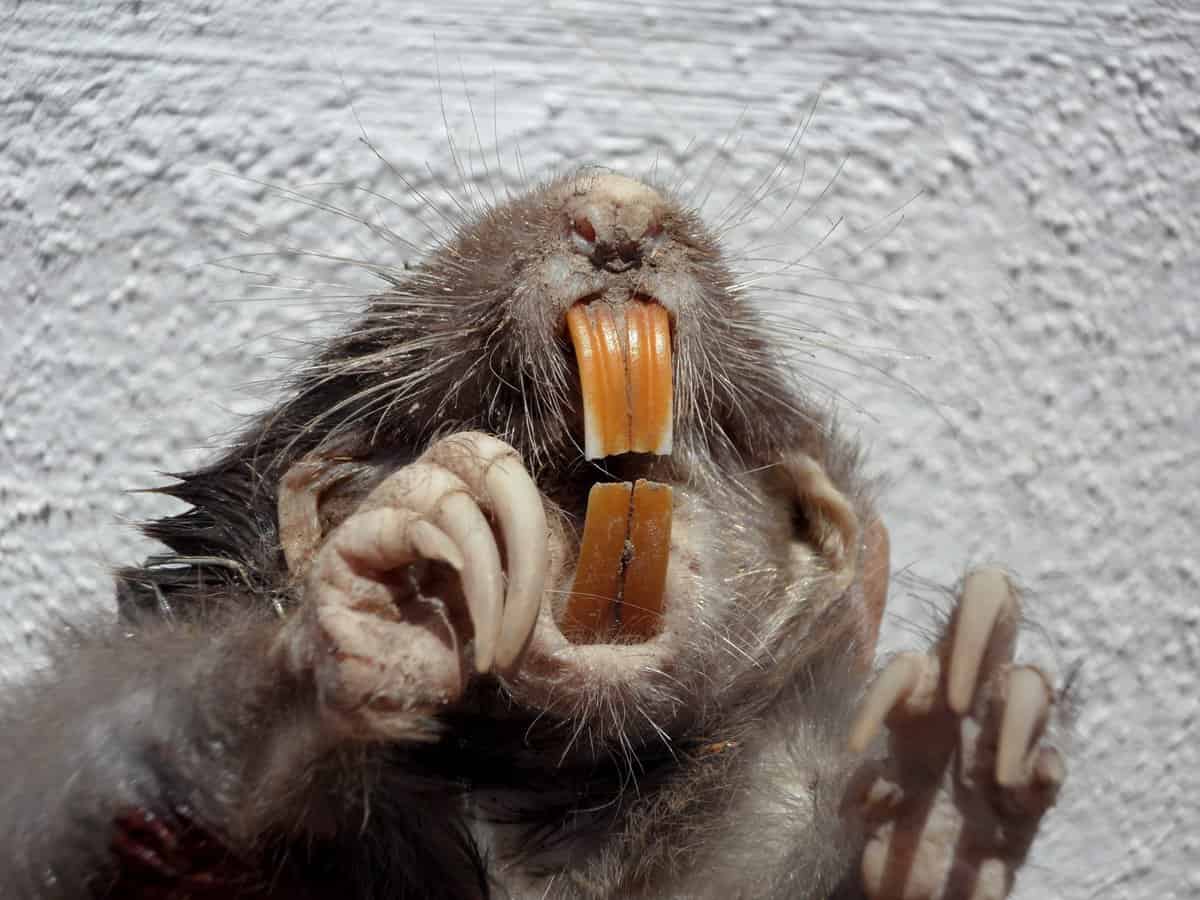 Not seeing it with your eyes is not a definite assurance that it’s not there. It is especially true for animals. Some animals, like pocket gophers, might as well be under your feet without you knowing!

Pocket Gophers are fossorial rodents that are rarely seen as they spend most of their life underground in their extensive self-made tunnels. These mysterious animals are most known for their paws and claws that allow them to dig through soil.

This article is an attempt to unravel an essential part of gophers; their paws and claws! Continue reading to know more about them — their uses and purpose!

One of the main features of a gopher is its paws. Gophers have large, clawed paws that they mainly use for digging. These paws are primarily white and look like an average rodent paw. They are thick and raw, hardened due to their extensive digging.

Gophers have front paws or forepaws that are equipped with long claws. Their toes and palms are fringed with bristles that help them essentially ‘swim’ through the ground. Claws are one of the huge defining features that helps differentiate the three genera of pocket gophers.

Aside from their claws, gophers have other unique features that make them easy to identify and recognize. They can range from 6-14 inches in size and can weigh about a pound.

A gopher has striking small eyes and ears, a relatively flat head, brownish to blackish fur, and a short, sparsely-haired tail. Another definite feature is its large front teeth or incisors used for chewing.

Do Gophers Have Webbed Feet?

Gophers do not have webbed feet. For such features, it is safe to assume that you might be thinking of moles instead.

Gophers and moles are both burrowing animals that share more than one similarity. They both look a bit similar and have the habit of digging, so mistaking them for each other is easy.

Instead of webbed feet, gophers have short, powerful legs with feet that are broad and toes that are tipped with enlarged claws. The hind feet and fore feet each have five digits.

The forefeet have an increased surface area with an additional fringe of stiff hairs surrounding its periphery. Its claws on its forefeet are incredibly long and well-developed.

What Do Gophers Use Their Paws For?

The front paws of a gopher are mainly used to excavate burrows since they are large and robust, with curved claws. A gopher would tunnel through the ground and soil to search for bulbs and roots to eat.

Gophers spend most of their time digging and living underground. It digs shallow tunnels to access juicy roots and tubers of gardens and crops. They also use their paws and claws to dig deep and complex tunnel systems where they can rest, nest, and store food.

Why Are Gophers’ Paws So Good For Digging?

Gophers have substantial front paws and strongly-developed fingers with curved claws at the end that are essential for their digging. They are well-adapted to digging, with their strong and large forearms and razor claws.

It’s not just their claws and paws that are made for digging. Its stout body was created and built to dig and burrow. They mainly rely on their front legs and long claws to break apart soil. When their claws are not enough, gophers can use their enormous teeth too.

Their large yellowish front teeth keep dirt away from its mouth as they dig. They also have special tear glands that help continuously clean their eyes as they dig through soil.

Since they mostly live underground with minimal light sources, they rely on their sense of touch. A gopher’s whiskers aid them in sensing what’s in front, while their sparsely-haired tail can feel what’s behind. All these developments and adaptations have made pocket gophers deft burrowers and diggers.

Gophers are active all year round, but they mostly like to dig during the spring and fall when the soil moisture content is in the best state for digging.

Do Gophers Have Claws?

A gopher’s claw is among its best and most known features. They use long, sharp claws to break through the soil. These curved claws are found on the tips of the toes and fingers of gophers.

They are enlarged and well-developed, which is needed for their extensive digging and burrowing. The ones found on their forefeet are generally the biggest and sturdiest.

How Do Gophers Use Their Claws?

A gopher’s claws have the same purpose and function as their paws — to dig. They loosen the soil in front of them by scratching at it with their sharp claws. Soil is then pushed backward and ejected towards the surface.

Gophers are accomplished and well-known diggers. They even have burrow systems such as mounds and lateral tunnels, as well as complex underground living quarters with different chambers.

Lateral tunnels are the feeding tunnels of gophers. These are where they can reach food sources such as vegetation and roots. While some might consider their digging habits detrimental, they perform valuable service by aerating and turning the soil.

Burrows can be highly branched or linear. They could also be quite dynamic, with sections and portions consistently being covered and new areas excavated. One burrow system can reach up to 200 yards of tunnels.

Gophers dig by loosening the ground and soil with their foreclaws and incisors. They push it with their forefeet and chest to the surface or towards empty burrows. Gophers also kick rocks, soil, and other items away from the digging site using their hind feet and paws.

They would form mounds as they dig tunnels. When seen from above, these mounds are typically crescent or horse-shoe-shaped. A single gopher can create several mounds in a day.

A gopher’s burrow does not support colonies. These animals are solitary, though several can reside close to each other, which might seem like they are part of a colony to an observer.