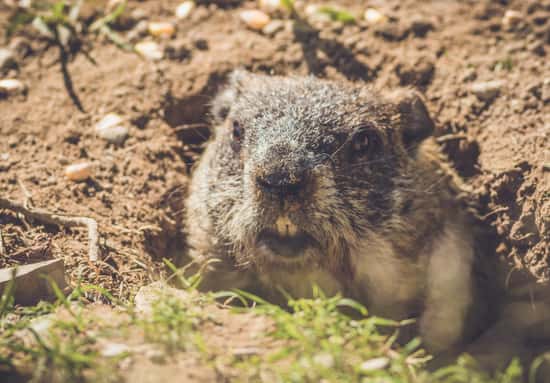 If you suspect that you have groundhogs in your area, it’s best to look for their burrows. By knowing about the groundhog’s burrowing behavior, you will be able to protect your property and get rid of the problem before it causes any serious damage to your home or property.

Keep reading to learn more about the groundhog’s digging behavior, including its burrows, tunnels, holes, and more.

How Do Groundhogs Dig Holes?

Groundhogs dig holes using their razor-sharp claws. They begin by digging downward for several feet. After that, the tunnel will incline a few feet, creating a divot or U-like shape. Once the groundhog has dug up, it will continue digging horizontally for 15 to 25 feet, all by using its shovel-like claws.

Why Are Groundhogs So Good At Digging?

Groundhogs are phenomenal diggers because of their sharp claws. Not only are their claws sharp, but they are slightly curved, allowing the groundhog to dig quickly and efficiently. The shape of their claws is reminiscent of shovels. If groundhogs encounter thick root systems, they can claw and chew at the system or go around it entirely.

Groundhogs begin digging their burrows by using their claws. The claws are long, sharp, and round. Because the claws are long and sharp, they can easily cut through wood, leaves, and other soil debris. Due to the rounded shape, groundhogs can toss the dirt they dislodge to continue digging along.

In addition to sharp claws, groundhogs have long, sharp incisors. These incisors are capable of gnawing through plant matter and even bark. If needed, groundhogs will use their incisors during the digging process, but they prefer to use their claws.

What Do Groundhogs Do With The Dirt They Excavate?

Even though groundhogs have flexible hands and shovel-like claws, they actually move the dirt they have excavated using their mouths. Once the soil has been excavated, the groundhogs will pick up the dirt by mouth and deposit it at the main entrance on the surface.

You might not think that groundhogs are able to excavate and move a lot of dirt, but the opposite is true. Some studies have shown that the animal-built features made from excavated dirt can weigh as much as 275 pounds when weighing the soil and rock contents.

Can Groundhogs Only Dig Through Normal Soil?

Groundhogs prefer to dig burrows in dry, well-drained soil. Often, this soil is found in the area where a forest or woodland meets a meadow or open field. You can discourage groundhogs by altering the natural soil and adding barriers, such as concrete, gravel, underground chicken wire, and other materials the groundhog cannot dig through.

If you are having problems with groundhogs digging through your soil, it’s best to alter the soil. You will want to remove wood, vegetation, and other organic matter that the groundhog can dig through. Often, these organic materials attract groundhogs.

Once you have removed the organic matter that attracts these creatures, you can add features to the soil to deter them from digging. Although groundhogs can dig through some rock, adding extensive gravel will deter them. You can also deter groundhogs using underground chicken wire, concrete, and other hard barriers.

If your soil is particularly wet, the groundhog is less likely to dig because they will be afraid of drowning in their own burrows. Likewise, you don’t have to worry as much about groundhogs digging through frozen soil since frozen soil primarily occurs whenever they are in hibernation.

From the outside, a groundhog burrow will be inconspicuous. There will be a small entrance and four or so exits. There will be mounds of dirt sitting around the medium-sized holes that acts as an entrance.

Burrow openings are around 10-12 inches in diameter and have a crescent-like shape mound around the hole. And these burrows can often be around 6 feet deep with multiple connecting tunnels that are 5-6 inches in diameter.

Burrows are generally well-organized. Groundhogs make separate areas for nesting, excreting waste, storage, and sleeping. Come to think of it, groundhogs are oddly reminiscent of humans. I mean, they even have toilets!

Below ground, the groundhog burrow is incredibly complex and includes designated areas, such as a latrine area.

Do Groundhog Burrows Have Multiple Entries?

Typically, groundhog burrows only have one entry point. However, they can have two to five exit points. By having more exit points than entry points, the groundhog has a better chance of surviving if a predator chases it into the burrow. Although the groundhog may enter the burrow from these auxiliary exits from time to time, they are mainly used for escaping.

Groundhog burrows are organized with two to three additional side tunnels from the main tunnel. As a result, there are typically two or three chambers at the minimum to ensure the groundhog has adequate space. One of these chambers will be used for the latrine specifically.

Do Groundhogs Have Toilet Areas Inside Their Burrows?

Yes. Groundhogs create a latrine chamber inside their burrow. This chamber is used exclusively for bathroom purposes. Once it is filled up, the groundhog will close that chamber off and dig a new one to create a new bathroom. Groundhogs do not go to the bathroom in any other chamber.

How Long Are A Groundhog’s Tunnels?

How Deep Are Groundhog Holes?

Groundhogs will normally dig about 6 feet deep into the ground. This depth helps to protect the groundhog from predators and freezing during the winter. The depth of the groundhog hole may differ slightly, but it is normally around this 6 foot mark.

Where groundhogs like to burrow ultimately depends on the time of year. Groundhogs prefer burrowing in woodland areas during the winter and grassy areas in the summer. These differing locations help to account for changes in temperature while the groundhog is underground.

Regardless of the season, groundhogs prefer dry, well-draining soil. They tend to avoid areas that are excessively wet or cause puddles inside the tunnel.

Do Groundhogs Have Multiple Burrows?

Groundhogs have two main burrows: a summer burrow and a winter burrow. These burrows are dug slightly differently to account for temperature variations and hibernation.

These burrows are typically only half a mile to one mile from one another. They may have more than two burrows, and groundhogs normally create multiple burrows throughout their life.

Winter burrows almost always have one entrance and prepare for the three-month-long hibernation. The area for hibernation is lined with grass and the entrance is blocked off with soil throughout winter.

When the mating season begins (which can be as early as February), the groundhog moves back to his summer burrow. Unlike winter burrows, summer burrows have more than one entrance, which can be recognized by the mound of dirt next to them.

How Many Groundhogs Live In One Burrow?

Groundhogs begin digging their burrows alone. As such, groundhogs begin living in their burrows by themselves. Once mating season rolls around, males will sometimes enter the females’ burrows in order to begin mating. The males and females will often live together until the young are able to start the process again and build their own burrows.

Do Groundhogs Live In The Same Burrow Their Whole Life?

No. Groundhogs do not live in the same burrow their entire life. Instead, groundhogs will abandon their old burrows on occasion in order to dig a new one. The purpose behind digging a new burrow is to keep everything clean and tidy.

In What Case Will A Groundhog Abandon Its Burrow?

Groundhogs will abandon their burrow for a number of reasons. They may abandon the burrow just because it’s time for a new one or because the old one has become structurally damaged in some way. Most often, groundhogs abandoned their burrows due to structural deficiencies or cleaning purposes.

What Do Groundhogs Do When Their Tunnels Fill With Rain?

Are Groundhog Tunnels A Problem For Building Foundations?

Groundhog tunnels are a serious problem for building foundations. They can lead to water damage, which then leads to excessive damage over time. If the groundhog removes a significant amount of soil under, or next to a house’s foundation, it might also cause house walls and foundations to crumble due to the lack of solid ground underneath. It’s important to deal with groundhog tunnels before they wreak havoc on your home’s foundation.

Groundhog tunnels primarily cause water damage to a homes’s foundation. Because the tunnels have cleared out dirt, water can flow directly to your home and underneath it. This additional water disrupts the balance of your foundation and causes excessive water damage and drainage problems.

In addition, they may also dig at underground pipes. Water, gas, electricity, are potentially at risk due to the groundhog’s burrowing. Plus, repairs and those bills tend to stack up very quickly.

Can You Block A Groundhog Hole?

There are ways that you can block a groundhog hole without harming the creatures. It’s important to seal the ground only after you have confirmed groundhogs are not inside the hole.

Begin by using a radio or urine-soaked rags to deter the animals from coming back. After you have used these deterrent methods for several days, place a piece of paper in the burrow entrance for 72 hours. If it is unmoved, the burrow is probably not occupied, unless it is winter.

After you have confirmed that no more groundhogs are using the burrow and it is not winter, fill the tunnel entrances with gravel. It is best not to seal up a Groundhog burrow in the winter since it might be used for hibernation and the paper would not be touched anyways.

Can You Flood The Groundhog’s Tunnels To Get Rid Of It?

Yes. Flooding a groundhog’s tunnel often does the trick. groundhogs prefer drier environments. If their tunnel is constantly being flooded, they will start digging a new burrow in a drier location.