These days, more and more animals are facing the possibility of extinction. Even animals that aren’t technically considered endangered still face threats to their survival. These threats can be long-term problems that put their species at risk if not adequately addressed.

While the public is becoming increasingly aware of this problem, many animals continue to go unnoticed when it comes to research and protection.

Take groundhogs, for example. For many people, these little rodents are just backyard pests. However, our little friends have their share of problems that we need to understand.

Is The Groundhog An Endangered Species?

Officially, groundhogs are listed as “least concern” in their conservation status. That means their population remains large and healthy and does not face any immediate dangers of extinction. Some even put their population as high as 200 million.

They also have a range that spans most of North America, from Alaska to Alabama. While this is good news, some scientists believe that this may change if issues like climate change continue to worsen.

What Are the Threats to Groundhogs

Climate change is one of the biggest issues for groundhogs’ future. Many marmot species, like groundhogs, have become accustomed to current weather conditions and depend on the weather remaining as it is for survival.

Sudden changes to these conditions, such as those brought on by climate change, can seriously affect them. During high temperatures, groundhogs can become stressed, which impacts their ability to breed.

Of course, climate change isn’t limited to hotter temperatures; it can also cause extreme cold. The longer winters that can be a result of global warming can cause equally adverse effects on groundhogs.

While groundhogs have a harder time surviving in a changing climate, their predators seem to have an easier time hunting. Coyotes, bobcats, and foxes are common predators for these little guys, hunting them throughout the year.

However, the big difference is these predators are less affected during the warm and cold months. While groundhogs struggle to deal with the high temperatures, coyotes and bobcats are accustomed to changing temperatures and can continue to hunt as always.

When the balance swings so heavily in a predator’s favor, it can lead to a drastic decline in the groundhog population. 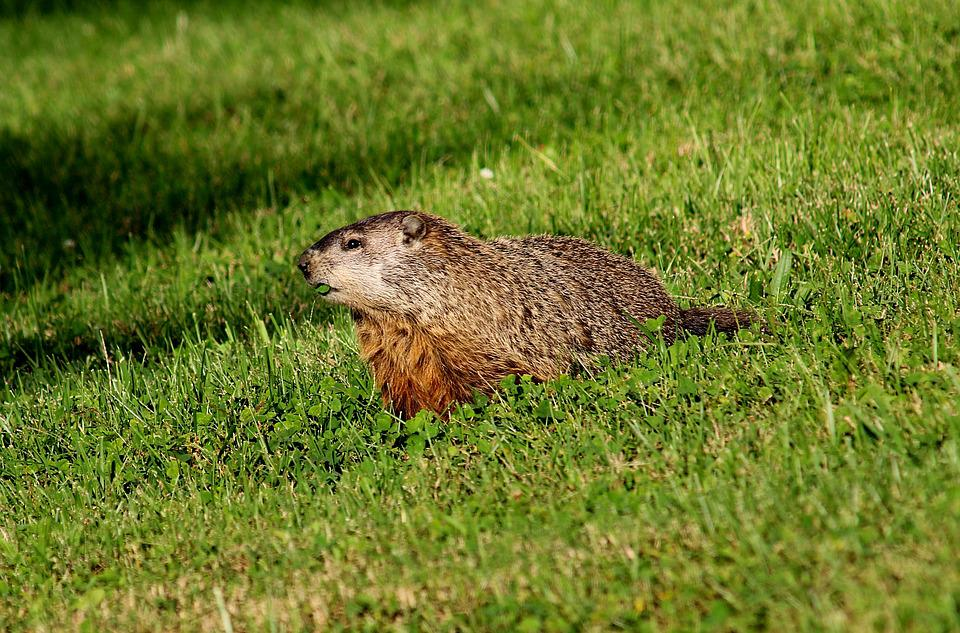 Speaking of hunting, climate change isn’t the only human activity that threatens these mammals, groundhog hunting is another threat to the population. In many parts of the US, especially the rural areas, groundhogs are considered pests due to their habit of digging up people’s property and farms.

This digging can result in gardens being destroyed, crops dug up, and, more seriously, even property damage.

Many states allow people to take matters into their own hands to get rid of groundhogs through hunting. Every year thousands of groundhogs are killed as a result of hunting.

Hunting is made worse because groundhog hunting has almost no restrictions, unlike other animals. You do not require a license, and people are allowed to hunt them year-round in many places.

Are Groundhog Populations Diminishing In Some Places?

Yes, there is evidence to indicate that groundhogs are declining in certain areas as a result of the issues above. One such example is the Great Smokey Mountain National Park.

Resident Smokies Supervisory Wildlife Biologist Bill Stiver has noticed that since joining the organization more than 30 years ago, he has seen fewer and fewer groundhogs, specifically around Cades Cove.

He attributes this to habitat changes and an increasing number of predators putting pressure on the population.

Another place that reports a decline in the groundhog population is Illinois, especially in the rural parts of the state. A study was conducted in 2009 by the University of Illinois after hearing reports of fewer and fewer groundhogs being sighted by locals.

Their research involved tagging 41 individual groundhogs and monitoring them. By the end of the study, only 22 remained, with most of the missing groundhogs ending up victims of predators getting to them.

Meanwhile, in the urban parts of Illinois, the groundhog population was faring better due to less activity from predators.

The situation is not limited to Illinois, either. Hunters and rural residents in other parts of the country report similar cases of decreasing groundhog populations.

While troubling, it is difficult to say how accurate the claims are since they are unverified. Without more research, even scientists have no idea how bad the situation is.

Are Groundhogs A Protected Species?

No, there are no federal laws protecting groundhogs, so it is up to each state to decide how they treat these marmots. When dealing with a groundhog problem, you must first consult with local and state laws to figure out your options.

Generally, in most states, groundhogs have minimal protection as a species. The rule of thumb for most states is that groundhogs can be hunted if they are causing damage to your property, such as digging up holes.

For example, Virginia lists groundhogs as a nuisance species, meaning they can be hunted without a license. Other places like Ohio and Indiana allow you to hunt groundhogs all year.

Should I Relocate A Groundhog On My Property?

Relocating captured groundhogs is complicated because each state has different laws on the issue. Generally, most states frown upon relocating groundhogs due to the environmental risks that come with them. These little mammals can be carriers of diseases, and releasing them back into the wild can spread the sickness to other animals.

That is why New Jersey outright bans relocating animals, including groundhogs. So if you were to catch a groundhog in New Jersey, your only options are to dispose of it yourself or have someone else euthanize it.

However, some states are a bit more flexible regarding relocation. Take Ohio, for instance; instead of forcing you to get rid of a groundhog, the state allows homeowners to relocate groundhogs if the situation meets certain conditions.

Other states enable groundhogs to be released on private property (with the owner’s permission) or in designated game lands.

Are Groundhogs an Invasive Species?

Since groundhogs have always been part of the ecosystem in North America, they are not invasive. While classification is different, their treatment is not. Under the law, groundhogs are not given any protection due to efforts to curb the population.

Are They An Invasive Species In Some Places?

Not in America, no. In all the places that groundhogs are in, they live there naturally. However, while a native species, some places treat groundhogs no differently than an invasive species because of the troubles they cause. Groundhogs have long been a problem for towns and neighborhoods, which is why they are considered pests.

The big issue people have with groundhogs is, that despite their small size, they can cause a lot of property damage. The burrows of groundhogs can uproot plants, weaken the foundations of structures, and just generally destroy the landscape.

Aside from their digging problems, being carriers of diseases is another problem with groundhogs. These mammals can become carriers of rabies, fleas, and Powassan, which they can pass on to other animals and people.