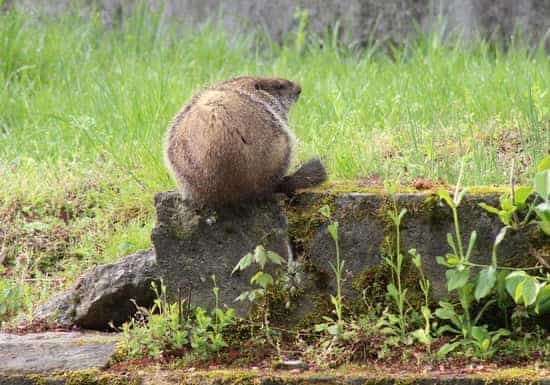 One defining characteristic of all mammals is that they have some form of hair or fur. Because groundhogs are a type of mammal, they are covered in fur, from head to toe to tail. Their fur serves many purposes and helps to keep them warm and safe.

If you are interested in learning more about the groundhog’s fur, hair, and tail, keep reading. This article takes a close look at groundhogs’ outermost extremities. Let’s get started.

Do Groundhogs Have Hair or Fur?

Groundhogs have fur on all main parts of their bodies. For example, fur can be found on their back, stomach, chest, head, limbs, and tails.

What Kind Of Fur Do Groundhogs Have?

Although Groundhogs are furry and covered in two layers of fur, they aren’t exactly the softest animal to touch. The outermost layer of fur is relatively coarse, which takes away from the softness of the dense overcoat. Overall, groundhogs aren’t quite as soft as other mammals.

That being said, groundhogs aren’t prickly or painful to touch. It’s just that their outermost coat is a bit coarse and rough to the touch. The undercoat, in contrast, is pretty dense and fluffy. So, groundhogs are about average in terms of softness – Some animals are softer, whereas others are coarser.

Can Groundhogs Have Different Colors?

Although groundhog fur can vary slightly, they generally come in the same color or range of colors. Groundhogs typically have a brownish-gray or dull brown color. Some will have a more cinnamon look. The species of groundhog often alters the exact color of the fur.

There is no difference in color between male and female groundhogs. Instead, you will have to look at the size of the groundhog and private areas to determine the sex of the Groundhog. If you see differences in colors between two groundhogs, it likely has to do with the individual or it is a different species altogether.

Do Groundhogs Shed and Lose Their Fur?

Every year, Groundhogs shed their fur. This molting process normally begins in April and occurs throughout May and June. The molting begins at the tail and extends throughout the groundhog’s body. Remember, this happens every year.

Although molting is common in groundhogs, groundhogs can lose their fur for other reasons. For example, groundhogs can develop mange, which causes fur to fall out. You can often tell the difference between mange and regular molting by looking at the skin. The skin will still be healthy during molting, but the skin will look unhealthy and injured if mange is to blame.

Do Groundhogs Have Tails?

The Groundhog is a giant ground squirrel. One thing that’s unique about different squirrel species is that they all have a form of a tail. Because the Groundhog is a member of the squirrel family, they have tails. In fact, Groundhog tails can be relatively long, ranging from 7 to 9.75 inches in length.

You can identify a Groundhog by looking at its tail. The tail of the Groundhog is long and brownish-gray in color. It isn’t quite as long or fluffy as the squirrel, but it is impossible to miss the Groundhog’s tail while identifying the creature.

How Does The Groundhog’s Tail Compare To The Squirrel’s?

A groundhog’s tail isn’t as fluffy and long and bushy as a squirrel’s tail. The coloring is going to be different as well.

So if you think a larger squirrel in your backyard, but it looks slightly off to you, it is probably a groundhog.

Much like other squirrels, groundhogs have furry tails. The Groundhog’s tail isn’t quite as furry or round as the squirrels, though. Instead, it is slightly flat like a beaver’s, but it is covered in fur, making it furry.

Do Groundhogs Use Their Tails For Anything?

The tails play an important function for groundhogs. They allow the groundhog to be more stable on their feet. Tails also provide other unique functions, such as attracting a mate.

The most obvious use of the groundhog tail is for balance. Groundhogs are short and stout creatures. The tail helps the groundhog to stay balanced, whether it is running on all fours or standing up on its hind legs.

There are a few other ways that groundhogs use their tail as well. For example, groundhogs raise their tail whenever they spot a predator. By elevating their tail, they increase their stress hormones that will give them the stamina to escape in the case of predator attacks.

Male And Female Groundhogs Use Their Tails For Different Purposes

Other than looking cute, what is the purpose of a groundhog’s tail? A male and female groundhog use their tail for a different purposes.

When a male groundhog finds a female he likes, he uses his tail to let her know. A male will wag his little tail like a puppy to let the female know he likes her.

A mother groundhog will wag her tail in happiness when she comes back home to her babies. That’s not unlike a lot of other animals that wag their tails to greet each other or for happiness.