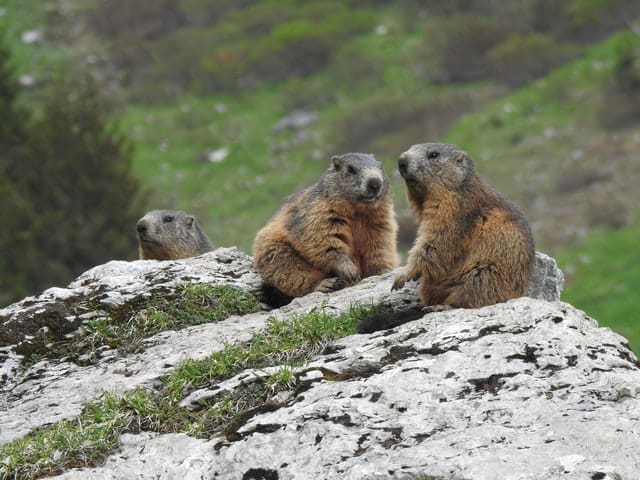 Groundhogs can live in a variety of different places across North America, whether that is meadows or even forests. But what exactly is the ideal habitat for a groundhog?

Groundhogs like to live wherever there is a high availability of food, which is why they switch where they live in the summer versus the winter. They can live anywhere from prairies to meadows to pastures. Clearing forests and Planting Field offers more habitable land for groundhogs.

Let’s discover more details about where groundhogs make their habitats, the terrains they prefer, and even the soil and climates they like to live in.

What Kind Of Terrain Do Groundhogs Prefer?

Groundhogs tend to live anywhere where they can have plenty of food nearby, but they also have preferences for soil and what other elements are around. Not only do they like big open spaces, but they also prefer slightly elevated places where rainwater will drain well. Let’s walk through some familiar terrains and what a groundhog may like or dislike about them.

Groundhogs generally look for open spaces to make their dens since they live underground, so places like forests and mountains where you might expect to see wildlife aren’t great for groundhogs. You’re more likely to find them in your well-groomed backyard.

Do Groundhogs Dig Their Burrows In A Special kind Of soil?

Groundhogs will have pretty much anywhere they can get in the buttocks of food, but they prefer dry and well-drained soil. The soil is ideal for them to create their dens in because it’s easier to dig through and will ensure that when it rains, they won’t have any flooding in the different caverns that they create.

Groundhogs need to be able to dig their dens easily. They like to have dry soil, but it also has to be well-drained, which usually means that it has plenty of rock pieces to create air and has particular vegetation nearby to help with drainage. They like to live in areas with higher elevations and that have head rows, end trees, and even house foundations, to the dismay of many house-owners.

Do Groundhogs Need To Be Close To Fresh Water?

You’re very unlikely to see Groundhogs drinking from a pond or lake, so they don’t need to live near freshwater. Groundhogs don’t like to live in damp areas, so they’re more likely to avoid living near large bodies of water and instead will opt to live in meadows and more open spaces.

Groundhogs eat various plants with a lot of water already in them and have dew and rainwater covering them. These become the primary way they get water instead of drinking from any freshwater around them, as you would see with other animals. As a result, they don’t need to live near fresh water to survive.

Groundhogs make both summer and winter burrows with different structures to account for the climate they live in. Most groundhogs live in North America, meaning they must deal with multiple seasons, including the colder and warmer seasons. They avoid damp and swampy areas, so they don’t tend to travel very far south.

Summer dens and winter dens have similarities in that they tend to have several different entrances and escapes while also being made up of many tunnels and underground chambers. The critical difference is that winter dens tend to be farther underground so that the groundhogs avoid the frost layer during the colder months.