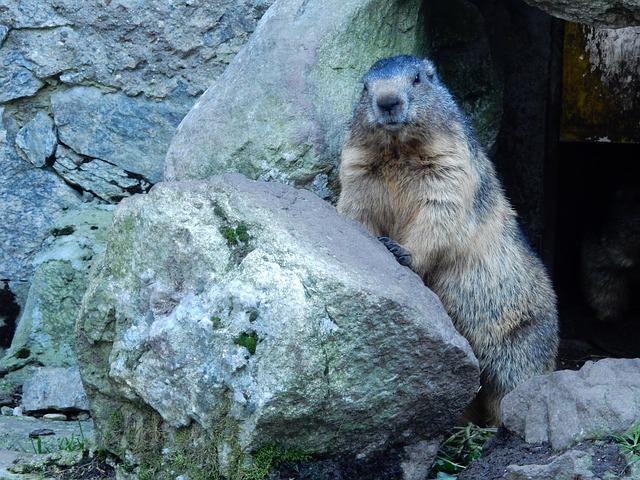 While you may be familiar with the groundhog due to the ever-popular Groundhog Day, have you ever thought much about the little weatherman’s lifespan? It is entirely dependent on the rodent’s environment.

Due to their vulnerability to predators, the average life span of groundhogs is 3 years. Groundhogs are slow-moving animals and often fall prey to coyotes, hawks, dogs, and even cars. In captivity, groundhogs can live up to 14 years.

Keep reading for a deep dive into how long groundhogs live.

How Long Do Groundhogs Live?

While they spend half of their short lifespan hibernating, wild groundhogs live between 3 and 5 years. Suburban areas are usually appealing to the slow-moving rodents, which leaves them susceptible to predators like dogs, cars, hawks, owls, foxes, and even humans.

Conversely, groundhogs in captivity can live up to 14 years and have litters of up to 9 kits.

What’s The Average Lifespan of A Groundhog?

The average life span for a groundhog in the wild is 3 to 5 years due to its vulnerability to predators, both aminal and human. These threats are taken away when a groundhog lives in captivity, resulting in a much longer lifespan of 9 to 14 years.

A groundhog’s age can be estimated by its body’s attributes, weight, as well as its ability to feed and complete daily tasks. When a groundhog is born, it doesn’t actually fully develop its fur until about 3 weeks old. Over the first year of life, the groundhog grows to its full size and can breed once it can live on its own.

Do Groundhogs Live Longer In Captivity Than In The Wild?

Captive groundhogs can live up to three times longer than those in the wild. This is a common occurrence due to access to proper medical care as well as safety from predators.

While there are a few differences between male and female woodchucks in terms of physical size and behavioral characteristics, the average life span of the two is about the same. They are equally susceptible to predators and environmental changes. There has not been extensive research conducted, but childbirth does not appear to shorten the female groundhog’s lifespan.

The average groundhog’s life cycle is fascinating, from infant to adulthood. Groundhogs prefer to be left alone with the exception of breeding in the spring. This is how life typically looks for the burrowing rodent species.

At What Age Do Groundhogs Leave Their Mothers?

Young groundhogs stay in their mother’s burrow until they are about 3–6 months old. When they reach this stage, they go off on their own to build their own lives in their own burrows.

At 6 months old, groundhogs are considered fully grown. They are entirely self-sufficient at this age, having grown short, muscular legs for digging and building their own underground burrows. Groundhogs, like many other rodents, must constantly chew on something in order to wear down their incredibly robust teeth.

When Do Groundhogs Have Their First Young?

Groundhogs, also known as woodchucks or whistle pigs, tend to wait until their second year of life to breed. Because their usual life span is 3-5 years, this could put immense pressure on the population.

However, female groundhogs are typically pregnant for 30 days and produce a single litter of 4-6 kits every spring.

What Do Groundhogs Do In Old Age?

Adult groundhogs can grow to be up to 20 inches long and weigh about 20 pounds, depending on their gender. Consequently, many predators find it difficult to hunt an adult groundhog.

Additionally, older groundhogs hibernate, making them one of the few mammals that spend the entire winter in their dens. They spend the summer feasting and building fat reserves in order to hibernate effectively and safely for the full winter season. Groundhogs typically hibernate for around 150 days, after which they emerge in the spring to mate.

Is There A Record Age For Groundhogs?

The longest-living groundhog on record, Punxsutawney Phil, was reported to be over 100 years old. Do you believe this? We’re not entirely sure.

Take a look at some of the oldest known groundhogs.

While he died in 2019 after a prolonged illness, Chattanooga Chuck was well-known on his local news channel for his ability to predict the weather. He was well-cared for, and his death had a significant impact on his community. He was ten and a half years old.

Punxsutawney Phil, the most famous of all groundhogs, is claimed to be over 100 years old. The Pennsylvania Club believes he is closer to 130 years old, although there is no evidence to support this claim.

Given the normal longevity of woodchucks, this is probably unlikely. Regardless, you’d be hard-pressed to find someone who has not heard of him.

Dunkirk Dave was rescued and nursed back to health by Bob Will. Like Punxsutawney Phil, Bob Will has used Dunkirk Dave for decades to predict the coming of spring in Dunkirk, NY. Based on reports from Mr. Will, Dunkirk Dave may be 58 years old. (But who’s checking!)

Also known as Staten Island Chuck, Charles C. Hogg is known as the most accurate weather-forecasting groundhog on record. Chuck calls the Staten Island Zoo home and is, apparently, 41 years old. He has been making his annual weather predictions since 1981.

Groundhogs are solitary rodents that hibernate in the winter and are famous for predicting the weather every Groundhog Day, but there are so many more interesting and unique aspects of their life cycles. While they may only live three to five years in the wild, these floofy creatures can live nine to fourteen years in captivity.

Some have even been claimed to live upwards of 50 years.

Groundhogs tend to inhabit suburban areas, so some of us may share space with these cuties and not even realize it. Hopefully, this article has helped you become more aware of these floofers that share your habitat.