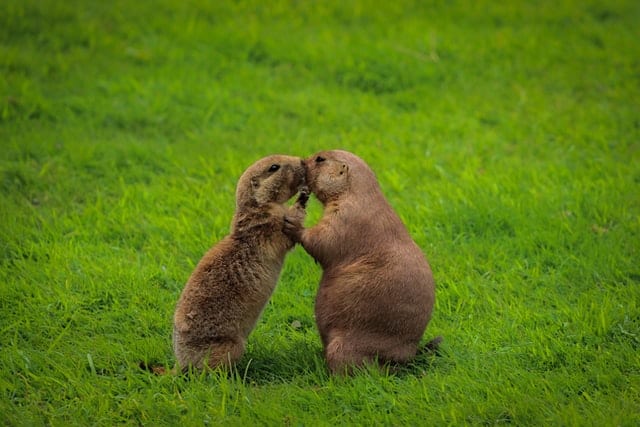 Groundhogs, also known as woodchucks, are non-monogamous rodents that mate each spring to produce roughly six pups. At roughly two years, groundhogs begin to mate. Males establish territories and then seek out female groundhogs to start their mating practice each spring.

Males mate with numerous females to produce as many pups as possible. The reason males are so adamant about reproduction is that females have minimal reproductive abilities. Females can mate only once per year, during their springtime fertility period.

Female groundhogs live-birth their young inside dens. The underground dens are large and often made of multiple ‘rooms,’ making them comfortable for large litters. After birthing pups, the mother takes care of her pups for seven weeks before letting them venture out of the den independently.

How Do Groundhogs Seek Out Partners?

Groundhogs typically come out of their six-month hibernation in March. Male groundhogs emerge one to two weeks earlier than the females, so they have to wait for a while before the females want to see them! Once the females are ready, the males spend a few days getting to know them, and eventually, they mate sometime between early March to late April, depending on how long the hibernation lasted.

Do Groundhogs Have A Mating Call?

Groundhogs do not have a general mating call. However, they will whistle to other groundhogs to indicate that they are in the area. Instead of sounding a mating call, male groundhogs will visit the dens of their potential mates to see if they are available.

At What Age Do Groundhogs Start Looking For A Mate?

At roughly two years, groundhogs will begin mating. At this time, the groundhog must have established a territory for themselves where there are eligible bachelorettes or bachelors.

Groundhogs may also begin mating at one year if they mature quickly enough or find an eligible mate or mates sooner.

Do Groundhogs Mate For Life? Are They Monogamous?

Groundhogs are solitary, anti-social creatures, and generally do not like to share their burrows with any of their friends or family.

They lead a solitary life, and do not need a romantic companion as a life partner- they are capable of fending for themselves, finding food, creating their sette, and protecting their home, all by themselves. The only situation in which they actually need a mate is in order to reproduce.

Although males seek out multiple partners, they are attentive to each partner. During winter, males will emerge from their dens before hibernation season is over to check on their partners and ensure their safety. In some cases, they will ward off enemies to protect their mates and pups.

When Is Groundhog Mating Season?

Groundhog mating season is in springtime, between March and April. The roughly thirty-day gestation period that follows means the pups are eventually born in summertime.

It takes groundhogs roughly seven weeks to mature before the pups set out on their own in fall, where they build their dens and prepare for winter on their own.

How Do Groundhogs Mate?

Groundhogs are nonmonogamous mammals whose brief courtship is a critical part of their breeding process. Male groundhogs can mate with multiple females during their fertility season. However, they are highly competitive and must win the female over before beginning the mating practice.

Mating season precedes hibernation. Therefore, male groundhogs will visit the underground burrows of their potential partners to socialize. They pull their partner from torpor to romanticize them. Introducing themselves and making the females comfortable increases their chances of becoming the chosen partner.

Male groundhogs who have domain over several female dens will wake early from hibernation to defend their territory. Although the relationships of groundhogs are nonmonogamous, males still defend the females in their territory as if they are partners.

Do Groundhogs Make Noise When Mating?

Groundhogs make several noises as they mate. Low and high-pitch whistling sounds are the most common noise groundhogs make. Groundhogs make this noise when mating and while feeling threatened. This whistling noise is why many people call them the “whistle pig.”

How Often Do Groundhogs Mate?

Mating with multiple females is assurance for the male that reproduction will be successful. Multiple partners may also influence the potential of larger pup yields. While some woodchucks might produce only one or two pups, it can be possible to mate with a groundhog that yields eight. The uneven numbers are, therefore, balanced out.

Do They Have Babies Multiple Times Per Year?

Female groundhogs can only mate one time per year during their springtime fertility period. Although they can only have babies once per year, groundhogs have large litters of roughly six pups.

Large litter production means that the groundhog has no problem maintaining its population, despite being prey to many larger predators like foxes, bobcats, coyotes, hawks, and domestic dogs.

How Long Are Groundhogs Pregnant?

The female groundhog’s gestation period lasts between thirty to thirty-three days. The number of babies that the groundhog gives birth to depends on her size, health, and genetics.

The average number of a groundhog’s litter size is five to six groundhogs. The number of groundhog babies females birth can range between one and nine.

The female lays low in her burrow (called a sette) while the babies are growing.

When Do Groundhogs Have Babies?

Groundhogs have babies in the summertime, roughly thirty to thirty-six days after their springtime mating session.

If groundhogs mate too late in the mating season, their babies will be born too late and, therefore, will be unprepared for winter.

Depending on when the mating happened and how long the gestation period took, the babies are typically born between May and June. There are between 2-6 baby groundhogs per litter, which is a lot for the new groundhog mom to look after!

Groundhogs are born without hair and can’t see yet, so they are very helpless. The mother takes care of them and nurtures them until they’re strong enough to head out in the wild and start exploring the land around them.

How Do Groundhogs Give Birth?

Groundhogs are mammals who give birth to their babies by live birthing. They birth their pups one at a time, having a momentary break between each pup. The mother births her pups in their den, where they remain for the next few weeks.

The groundhog mother births her pups alone. When birthed, the pups are entirely blind and deaf. They remain in their burrows with their mother for roughly seven weeks. Female groundhogs care for their pups and do not leave their side during these seven weeks.

Groundhogs do not lay eggs because they are mammals and only two mammals lay eggs, the platypus and echidna. Many animals, aside from birds and fish, lay eggs. However, the groundhog is not one of them.

The groundhog is a warm-blooded rodent that will live birth its pups in a den during the summertime only a month after conception.

Where Do Groundhogs Give Birth?

How Many Pups Are In A Groundhog Litter?

There are roughly six groundhog babies in a litter. This average can vary depending on the size and genetics of the groundhog. Typically, larger females can bear larger pups. Furthermore, genetics may also influence larger litters.

What Are Groundhog Babies Called?

Groundhog babies, newborn and maturing, are called pups. Young groundhogs can also be referred to as kits. Chucklings is a common term for folks who refer to groundhogs as woodchucks.

Do Groundhog Pups Make Any Sound?

Baby groundhogs tend to make a few sounds, including squeaking, whining, and crying. The most common sound that groundhog pups make is a gentle squeaking noise. A squeaking noise indicates their needs.

Groundhogs are less than four inches long and weigh only 25 grams when born. They are as small as squirrels.

Baby groundhogs have a similar appearance to squirrels when they are born because of their slim size. As the groundhog matures, they gain weight. As adults, they will resemble beavers and other similar marmots.

Initially, groundhog pups are blind, with ears folded inward. Baby groundhogs do not emerge from the den before their eyes open and ears adjust. Therefore, it is uncommon for humans to see groundhogs in their first few weeks.

How Big Are Baby Groundhogs at Different Ages?

At birth, the baby groundhog weighs roughly 25 grams. Newborn groundhogs are slightly larger than 3 inches and grow relatively quickly. By seven weeks, after the mother has weaned her pups from her milk, the pups will have increased in size significantly.

As an adult, groundhogs will weigh around five to thirteen pounds. They will be roughly twenty inches long. The groundhog’s teeth will grow roughly one-sixteenth of an inch each week.

How Do Groundhogs Take Care of Their Young?

Female groundhogs take care of their young very closely during the first few weeks of their lives. The mothers nurse their young to provide them with the food they need until they are roughly forty-five days old.

After weaning their young, mothers provide their young with guidance and encourage them to dig their burrows.

What Do Groundhog Babies Eat?

Groundhog pups rely on their mother’s milk for the first few months of their lives. After roughly forty to forty-five days, mothers wean the pup’s from her milk and introduce them to traditional foraging tactics.

After weaning, groundhog pups begin eating grass, vegetables, insects, and various foliage. Mother groundhogs briefly teach their young how to forage before sending them off on their own.

How Long Do Groundhog Babies Stay With Their Mother?

Do Groundhog Mothers Ever Leave The Babies?

During the first few weeks of their lives, mother groundhogs do not leave their babies. After seven weeks, when their pups gain their vision and hearing, mothers begin to take their pups from their den and allow them to explore the surrounding area.

Mothers supervise their pups as they explore while also getting food for themselves at the same time.

When Do Groundhog Babies Start To Come Out?

Groundhogs come out of their dens after six or seven weeks. By seven weeks, groundhogs have developed their sight and hearing. The pups have also weaned from their mother’s milk and are beginning to learn foraging techniques.

As the pups begin to explore the surrounding territory, they remain under the supervision of their mothers. If they are confronted by dangers, their mother will whistle, and all pups will rush back to the den for safety.

By roughly two months old, groundhogs will permanently leave their underground burrows and establish dens. At first, their den may be within the territory lines of their mother and father. As they mature, the groundhog will inevitably begin to venture out more until they are finally on their own.

Finding their territory is especially important for male groundhogs, who must have their own land or steal the land of another male to begin the mating process by their second winter.

How To Tell If A Groundhog Has Babies?

Groundhogs with babies are more defensive of their territory. Males often combat approaching predators and other males who try invading the area during mating season. Females are also on high alert after birthing pups.

Females are very nurturing to their pups, and they watch their young closely.

What To Do If You Find A Baby Groundhog?

It is almost impossible for baby groundhogs to survive without their mothers because of their inability to use most of their senses upon birth. Wildlife experts know how to transport, care for, and rehabilitate baby groundhogs.