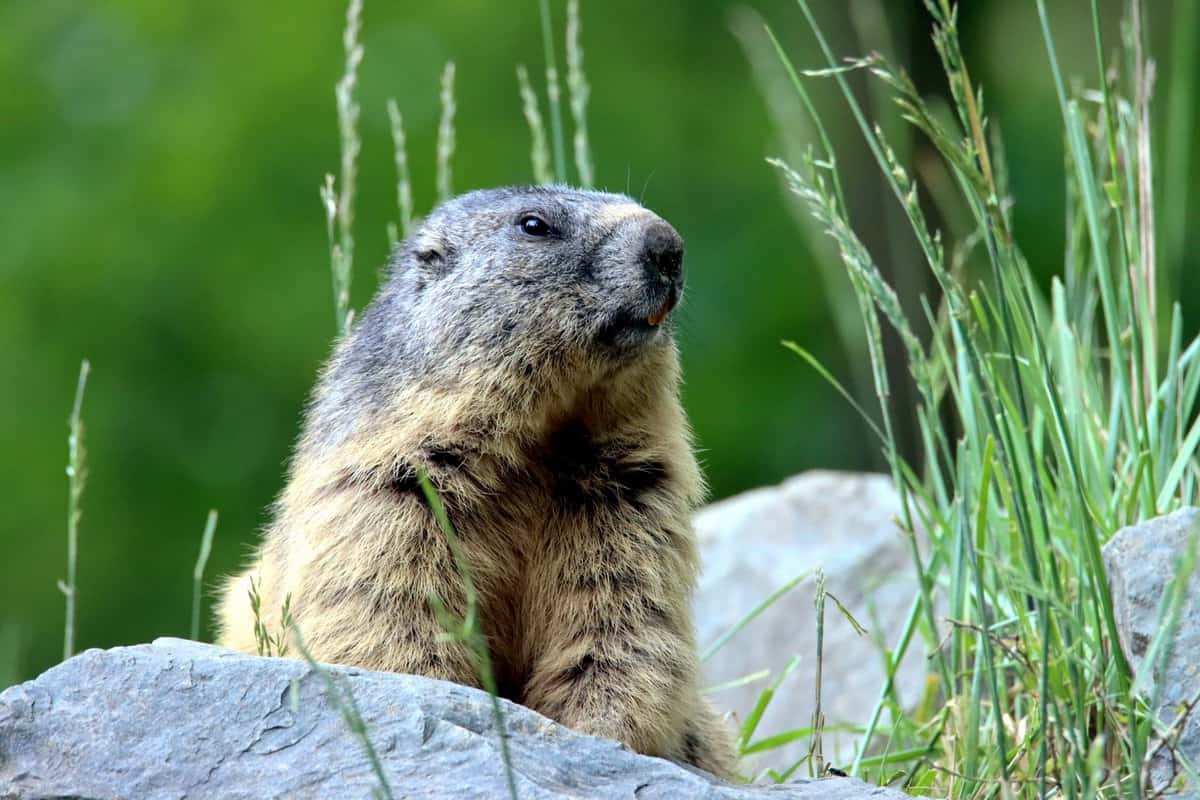 Groundhogs are often associated with sleeping and lazy behavior. Even so, not many people actually know about the groundhog’s sleeping habits, such as how long they sleep per day and where they prefer to sleep.

Shockingly, groundhogs can sleep for up to 20 hours a day during the summer, and they sleep for stretches of 150 hours during the winter. For both of these sleep times, groundhogs prefer to sleep in their burrows, though in different parts of the burrow.

To learn more about the groundhog’s sleeping behavior, keep reading. This article looks at the interesting nightlife of these sleepy creatures, including where they sleep and what they do in the winter.

Where Do Groundhogs Go To Sleep?

Groundhogs are known for their complex burrowing systems. These systems are where the groundhog sleeps, raises its young, and hibernates during the winter months.

In many areas, groundhogs are considered a nuisance because of their complex burrow systems. These burrows can run under the length of a yard or garden. There are different parts of the burrow, and each area serves a different purpose generally.

During the summer, groundhogs sleep in the parts of the burrow that are easier to access. That way, the groundhog can get in and out easily. During the winter months, groundhogs will go further into the burrow so that they can hibernate more safely.

Do Groundhogs Sleep At Night or During The Day?

During the day, groundhogs are very active and spend their time foraging for food. They particularly like looking for food early in the morning and late in the afternoon. They mainly eat plants, but they will sometimes eat small insects or animals during this time. Once it gets dark, groundhogs will go back into their burrows so that they can safely sleep.

Do Groundhogs Sleep Together?

Unlike other rodents, groundhogs do not live in large colonies. Instead, groundhogs tend to burrow with one male and one or two females, as well as the young. These groundhogs will sleep together, especially during the breeding season.

When Do Groundhogs Wake Up?

Once the early morning feeding is over, groundhogs sometimes go back to their burrow to take a midday nap. They will wake up again in the late afternoon to continue foraging.

How Long Do Groundhogs Sleep For?

How long groundhogs sleep depends on the time of year. In the summer, groundhogs can sleep for 16 to 20 hours every day. In the winter, groundhogs go into a temporary state of hibernation, which allows them to sleep for a week at a time.

During the summer, groundhogs get most of their sleep at night, but they will sometimes take naps during the day. These naps occur in between their morning foraging and their afternoon foraging.

They sleep much more in the winter, much like many other animals. Often, groundhogs sleep for about 150 hours at a time in the winter, and they hibernate for a period of 7 to 8 months. Every week or so, groundhogs will wake up before going back into their hibernation state.

With torpor, groundhogs undergo 2 stages of hibernation. During the preparation phase, the groundhog will eat as much as possible so they have more nutrients to metabolize during the hibernation. This is the time when the animal will also be active and reproduce.

During the hibernation phase, the groundhog’s metabolism decreases by about 90%, and their body temperature can drop to 35 degrees Fahrenheit. Still, there are periods of activity that typically last for 40 hours at a time. It is unclear why groundhogs wake up during their hibernation, but it might have to do with cellular level function.

Where Do Groundhogs Hibernate?

Groundhogs will hibernate in their complex burrow systems. That being said, groundhogs go further into the burrow during the winter to hibernate so that they’re far away from any creature entering the hole. During active periods of hibernation, groundhogs may emerge.

What Happens When Groundhogs Hibernate?

Groundhogs undergo a form of hibernation in order to survive cold winters. During this time, their metabolism drops, as does their cellular activity so that they can survive by sleeping and burning off the fat reserves they’ve built up during the summer.

Groundhogs enter their burrow for hibernation whenever they are at their maximum weight for the year. Then, the groundhog will decrease its metabolism by up to 90%. Its heartbeat will slow down to a startling 4 to 10 BPM. Their body temperature can even drop as low as 35 degrees Fahrenheit during this time.

Groundhogs will stay in this state of sleeping for about 150 hours at a time. While they are sleeping, they will live off the fat reserves that they built up during the summer months. Every 150 hours or so, the groundhogs will wake up for a stretch of activity. This activity can last for 40 hours.

By the time the groundhog awakens from its hibernation, it will have lost about half its body weight. Then, the cycle will start all over with the groundhog eating more food so it can store up for the next winter.