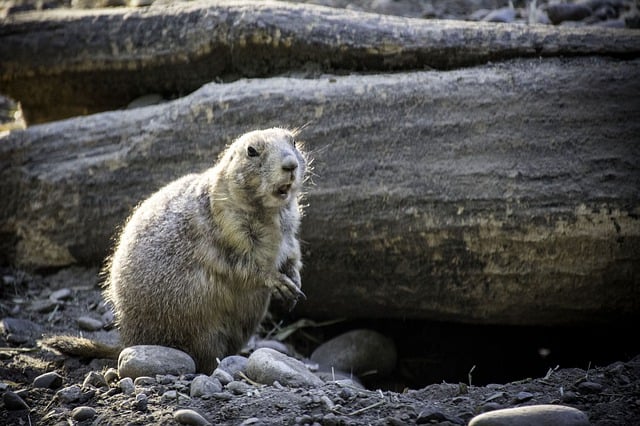 Groundhogs, also known as woodchucks, are relatively noisy mammals during the daytime -and silent during the night. They love to converse with other members of their groundhog group by using chirps and grunts when they become excited.

The groundhog makes a lot of defensive noises such as teeth chattering, hissing, and shrilling. The proactive woodchuck even whistles to other woodchucks to keep the group safe from nearby danger. By making these noises, they scare predators away and alert their nearby groundhog colony of the danger in their presence.

Aside from defensive noises and basic communication, the groundhog remains quiet throughout most of its day and night, so it does not attract attention to itself.

What Noises Do Groundhogs Make?

Groundhogs are known to make several sounds, including whistling, grunting, chirping, shrieking, chucking, teeth chattering, and much more. Depending on what mood the groundhog is in, they will make different noises.

Chirping is the groundhog’s main form of communication. Groundhogs use chirping to communicate any of their basic needs.

The groundhog grunts when they are happy or excited about something. Typically, this noise is made when the groundhog is experiencing something enjoyable like eating, socializing, or sunbathing.

Whistling is the most common defensive measure. Woodchucks whistle to tell their fellow colony members that they have spotted a predator nearby.

Do Groundhogs Make Noise At Night?

Groundhogs sleep in their underground burrows through most of the night. Therefore, they do not make much noise as they sleep. If they do need to move through the night, they are silent. Groundhogs typically prefer to stay quiet during the night not to alert large, nocturnal predators in their area.

What Sounds Do Baby Groundhogs Make?

Baby groundhogs often make squealing noises to navigate their way around, especially when led outside of their dens. Young groundhogs will cry for their mothers in a high-pitched whine because they cannot vocalize their needs.

When a groundhog is happy, they make a grunting noise. The grunting noise is a repetitive chortle that resembles human laughter. The noise is created by breathing in and out of its nose quickly because of happiness. The noise is relatively high-pitch and is often in groups.

A common groundhog behavior is to make grunting noises as they greet each other with special Eskimo kisses. Their special kisses involve rubbing nose and mouth affectionately. As they do this, you can hear a gentle and affectionate grunting sound.

Groundhogs sound similar to the Eastern gray squirrel, which is no surprise given groundhogs are the largest species of the squirrel family. They make chirping and whistling noises to communicate with other groundhogs.

These two forms of communication are the most common ways that groundhogs make warning calls to other groundhogs in the area. They alert others of nearby predators, weather, and any other things that could potentially harm them.

Groundhogs are known to make warning calls to other animals before attacking them. They have great defense measures which typically prevent them from being attacked by predators.

Whistling sounds are among the most common noises groundhogs make because it is a colony-wide warning call for any approaching danger. The groundhog is highly motivated to keep its population safe, so they will whistle if they sense any nearby danger. The frequent whistling of groundhogs is what gave them their nickname, the “whistle pig”.

Groundhogs make whistling sounds when they want to warn other groundhogs of an approaching predator or other danger. In the woodchuck community, whistling signifies that you should be on high alert.

A common distress sound that groundhogs make is whistling. They make this noise when they fear their lives or they feel there is danger nearby. Whistling signals to the groundhogs around them that they should evacuate the area. Groundhogs will shriek and squeal if they feel scared.

Do Groundhogs Squeal or Scream?

It is common for groundhogs to squeal or scream when they are hurt or in danger. Since the groundhog is intelligent and focuses on survival, the groundhog does not release a life-threatening noise like a scream or squeal without reason. These two noises are similar to the whistle, which commonly happens when a groundhog is trying to warn their colony of approaching danger.

Groundhogs will squeal when fighting other groundhogs or predators. Squealing is a sign that the groundhog is frightened that they may lose the fight. It can also be a sign of a surprise, such as an unpredicted attack on the groundhog.

Many groundhogs scream after they become injured in a fight. Screaming is a sign that the groundhog is in physical pain. If the groundhog is screaming after a fight, they might be calling out for another groundhog to help them, or they may be signaling their nearby colony that they are in jeopardy of sustaining a serious injury.

Their growl sounds like a grumbled warble which is very intimidating to specific animals. These growls are not similar to the growls heard from species like foxes or dogs. Instead, they are warbles that resemble a more slim or agile animal.

All fighting begins with a whistle, which expresses danger to any nearby groundhogs. A combative groundhog will show their anger by emitting a warbling sound with a “chuck-chuck” then barking or squealing. Hissing is another common noise groundhogs make while fighting other groundhogs, predators, or animals.

There is no general difference in the sounds that male and female groundhogs make. Both genders make their fair share of the same noises, including noises such as whistling, hissing, and barking. The type of noises that a groundhog makes depends on the scenario and not the gender of the animal.

Are Groundhogs Afraid Of Some Noises?