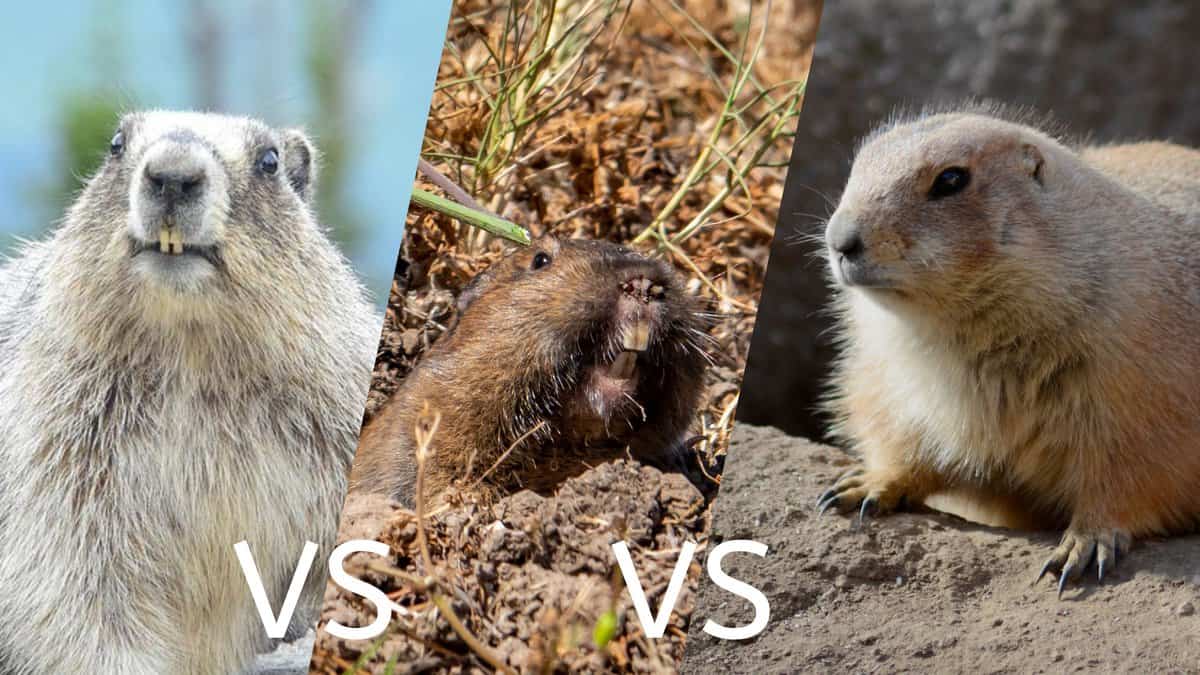 Groundhogs, Prairie Dogs, and Gophers are often confused with one another because of the similarity in their appearance and digging behavior.

Even though they have highly similar features, distinguishing one from another is definitely possible. Let’s investigate the characteristics that set these animals apart from one another!

Groundhogs, Prairie Dogs, and Gophers are closely related animals. They all belong to the order Rodentia, most commonly known as rodents. All these three animals are known for their digging behavior and for creating elaborate burrows and tunnels.

However, prairie dogs and groundhogs are more closely related because they are both under the Sciuridae (squirrel) family, while gophers belong to the Geomyidae family.

Perhaps, the most evident characteristic that these three animals have in common is their rodent incisors. These rodent teeth are located in each of their upper and lower jaws.

Rodent incisors are hard and sharp and will continue to grow throughout the whole lives of the critters.

How Can You Tell The Difference Between Groundhogs, Prairie Dogs, and Gophers?

Maybe you’re wondering what kind of animal is responsible for the holes that have been appearing in your yard. Perhaps you’ve even caught a glimpse of the critter but aren’t sure whether it’s a prairie dog, gopher, or groundhog.

Don’t worry because there are notable distinctions between these rodents in size, appearance, behavior, and eating preferences. Identifying these animals from each other is easy if you follow these instructions:

Groundhogs have the biggest size compared to the two others, followed by prairie dogs and then gophers. Groundhogs are 2 to 3 times bigger than prairie dogs, while gophers are typically half the length of prairie dogs.

Here is a table that can help you properly identify one from another:

What Do Groundhogs, Prairie Dogs, and Gophers Look Like?

All these three animals are covered with fur and have short yet muscular legs, small ears, furry tails (except for some species of pocket gopher), and sharp incisors.

Although they look similar at first glance, if you observe them for a while, you will see some major differences. Here are some of their most observable differences based on appearance:

Groundhogs stand out because of their long and thick fur and dark-colored feet. In addition, they also have thicker, more bushy, and more fluffy tails compared to the other two rodents.

In comparison, prairie dogs have short, thin, and relatively coarse fur, which is yellowish buff, cinnamon-like, or reddish in color. They have thin, black-tipped tails that are very different from groundhog tails.

The fur of pocket gophers varies from pale brown to completely black. Their feet are more slender, smaller, and pink in color. Their tails are also thinner and frequently hairless, similar to a rat’s tail.

Prairie Dogs Have A Distinct Neck

Prairie dogs have visible and distinct necks compared to the other two. Their necks are visible because of the tight and scant skin in their neck area. This also makes grasping the skin around their neck close to impossible when handling them!

A prairie dog also has lighter-colored fur in their neck and chest area than the reddish-brown fur on their backs.

Groundhogs and gophers don’t have as distinct necks because of more loose skin around their neck area. Hence, grabbing the excess skin at the back of their neck is a bit easier when handling them.

Gophers’ Teeth Stick out Even with Their Mouths Closed

Gophers have protruding teeth, which stick out from their mouths whether their jaw is open or closed. Instead of white, they frequently have yellow or light brownish teeth.

On the other hand, groundhogs and prairie dogs have teeth that are paler and whiter. When a prairie dog’s mouth is closed, its incisors are hidden behind its lips, but groundhogs often have somewhat visible incisors.

Yes, groundhogs, prairie dogs, and gophers sound differently. Here are some of the sounds that each of them makes:

Groundhogs earned their nickname, the“whistle pig” for a reason. They are very vocal and create a lot of different sounds whenever they are alarmed, fighting, or get caught by predators.

The sounds they make include:

Prairie dogs have a distinctive call that they use to alert other colony members about any potential threat. Although they sound a little repetitive for humans, studies have shown that they even communicate using a distinct code.

This code contains details such as the color and size of the predator.

Quite advanced for the little critter!

Here are some of the sounds that they create:

Among the three, gophers are the least vocal. This is probably because they spend most of their time in their burrows without encountering predators, or other gophers much.

What do Groundhogs’, Prairie Dogs’, and Gophers’ Burrows and Dens Look Like?

Groundhogs, prairie dogs, and gophers dig burrows and tunnels they use as their home. They’ll excavate multiple branches in the main tunnel that lead to various chambers.

They assign each chamber a purpose, including the nursery, feeding burrow, food storage, and even a potty chamber! The sizes of their tunnels vary, as shown in this table:

How Do Groundhogs, Prairie Dogs, and Gophers Behave Differently?

Although they have a lot of similarities in their tunneling behavior, these animals also have distinct behaviors that set them apart. Here are some notable differences in terms of their behavior:

Groundhogs are true hibernators and spend most of the winter in hibernation. Dormancy starts when they slow down their metabolism and other bodily functions.

Both their temperature and heart rate fall dramatically during this stage. They can reduce their body temperature below 68 °F (20 degrees Celsius) and their heart rate down to 5 beats per minute.

Gophers, on the other hand, survive winter by staying in their burrows. They tend to dig deeper in the ground if the temperature gets too cold, and they depend on the depth of their tunnels to keep them warm.

Prairie dogs survive winter by preparing by first gaining weight and putting on layers of fat. If the temperature gets extremely cold, they might go into a very light, hibernation-like sleep, but they are still not considered true hibernators.

Prairie dogs are very social and enjoy sharing their resources with other members of their families. They enjoy spending their free time relaxing and bonding with their immediate family.

They have a way of distinguishing friends from foes through ‘greet kissing’. Through this, they can identify if they are members of the same group.

This may sound sweet, but they actually lock their teeth together. From the way their teeth are locked, they can easily distinguish if they belong to the same colony!

It’s the opposite with groundhogs and gophers, which are solitary animals and will only spend a brief moment with their mate when reproducing and raising babies as they grow up. If they’re female, that is.

Gophers Use Their Tails When Walking Backwards in Their Tunnels

Gophers use their almost hairless tails to guide them as they walk and maneuver backward in their tunnels. Their tails are well supplied with blood vessels and nerves that make them very sensitive to their environment.

The thick and fluffy tails of groundhogs and prairie dogs don’t have this kind of use.

Are Groundhogs, Prairie Dogs, and Gophers Found In The Same Places?

Groundhogs, prairie dogs, and gophers are found almost in the same geographic places.

Groundhogs are mostly found in North America: from Canada down to the southern United States. They like habitats in dense forest edges, meadows, roads, and open fields.

Similar to groundhogs, prairie dogs live from Saskatchewan and Sonora in Canada to Chihuahua in Mexico. They prefer dry and sparsely vegetated grasslands and plains.

Lastly, gophers can be found in North and Central America, and they prefer loose and sandy soil.

Do Groundhogs, Prairie Dogs, and Gophers Have The Same Enemies?

Groundhogs, prairie dogs, and gophers have the same set of enemies, such as predators and competitors.

Their predators usually hunt them and their young. This is the list of their major predators:

On the other hand, they also have a fair amount of competitors that share the same diet as them. The list of their competitor includes the following:

Do Groundhogs, Prairie Dogs, and Gophers Forage For The Same Food?

Groundhogs and prairie dogs are primarily herbivores. Their diet includes a variety of plants, including short grasses, weeds, fruits, and other flowering plants. However, if food is scarce, they will consider consuming insects, and snails.

On the other hand, gophers have a strictly herbivorous diet. They mostly consume roots, fruits, and bark. Sometimes they will pull down ground vegetation directly from their tunnel below. They never eat meat or insects, though.

Will Groundhogs, Prairie Dogs, and Gophers Fight Each Other?

Groundhogs and gophers are timid and aren’t really very aggressive at all. They won’t attack or fight each other unless strictly necessary when they feel threatened or their young are at risk.

Prairie dogs, however, are considered fast and skilled fighters. They can be aggressive to those who are not members of their family.

However, there are no recorded cases of a feud among these three animals at the moment.