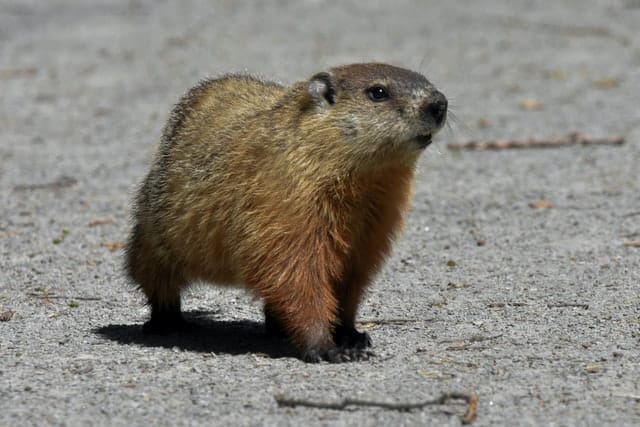 One thing groundhogs are known for is that they are exceptional burrowers. But what exactly are their burrows for, and do groundhogs move outside them?

Groundhogs are like underground architects because they dig and build their complex burrows with many chambers and connecting tunnels. These groundhog burrows serve three main purposes: protection from their predators, their breeding ground, and a place for hibernation.

When the groundhog’s hibernation phase is done, they will come out from their burrows to eat and find their mate.

You may see them move around and run during this time, specifically early mornings and late afternoon. Curious about how they move or if they are fast runners? Let’s keep reading to know more about how, when, and why groundhogs move outside their burrows.

Can Groundhogs Run, When They’re Out Of Their Burrows?

Yes! Groundhogs can certainly run when they are outside their burrows. Just don’t expect that they are fast-running creatures because they are not!

So, what do they do next once they’re outside? Well, there are just so many things that groundhogs need to accomplish before they hibernate again. They eat, move around, look for their mates, breed, waddle, walk, run, and eat again.

No. Groundhogs are not fast runners. Although you may see them waddle in your backyard or across the ground, they can disappear in the blink of an eye once they sense that they can be in danger. But how can this be possible if they are slow runners?

Generally, these animals have short legs, so they only run short distances. When groundhogs sense danger, they sprint to the nearest burrow entrance they can find to hide. This explains their quick disappearance might lead some people to think that they are fast runners.

Moreover, they can normally move or run at approximately 2 mph, but when they are alarmed or startled, their speed can increase up to 10 mph when they give it all that they have.

Is It Easy To Catch A Groundhog Outside Of Its Burrow?

Because of their cute and furry appearance, some people may find groundhogs adorable. However, these little creatures can cause serious threats such as structural damage to someone’s yard and home, and farmers see them as pests.

That is why homeowners try to catch them, but it isn’t as easy as it sounds, despite them being slow runners.

In addition, even though groundhogs are outside their burrows, they use strategies to escape, just like running and hiding in the closest burrow they can find. They can also show aggressive behaviors in the wild so approaching them needs caution. Therefore, you may need to set up traps or even hire experts to successfully catch them.

Do Groundhogs Often Move Around Outside Their Burrows?

Groundhogs may be known to hibernate for months, but once they are outside their burrows, they move as they normally do.

They are also diurnal animals, which means they are primarily active during the day, specifically early in the morning and before the evening hours. While they are active during these hours, groundhogs usually come out and move outside for up to two hours every day.

Why Would A Groundhog Come Out of Its Burrow?

Once groundhogs finish their hibernation phase, they will now come out of their burrows. In milder climates, these animals begin to emerge from their winter hibernation as early as the middle of February. But what exactly are the reasons why a groundhog would finally come out of its burrow?

Groundhogs are herbivores, so they mostly eat plants such as vegetables, roots, and grass. Interestingly, they have distinct seasonal eating patterns where they feed on every plant they pass by during the summer, every morning and late afternoon. During this season, they have to eat as much as they can to prepare for their next hibernation during winter.

Another reason to venture out of their burrows is to find their potential mate. It is only during mating season that groundhogs come out to interact with other groundhogs.

Male groundhogs come out early to check their territory for female burrows where they can spend the night. This is important for the male animal to introduce themselves and get to know each other during these visits.

Female groundhogs give birth about four weeks after mating. Baby groundhogs stick with their mother for two to three months after birth, and then they will leave their mother’s burrow. They will dig their own burrow and will start to live alone and become solitary like adult groundhogs.

How Far Would A Groundhogs Go From Its Burrow?

Groundhogs only run within short distances. During the daytime, they rarely go farther than 50 feet to 150 feet (15-30 meters). This is one of their ways to protect themselves. Since they are slow runners, most of the time, groundhogs tend to stick close to their burrow, protecting the entrance to ensure they have a safe spot to hide in case a predator comes for them.