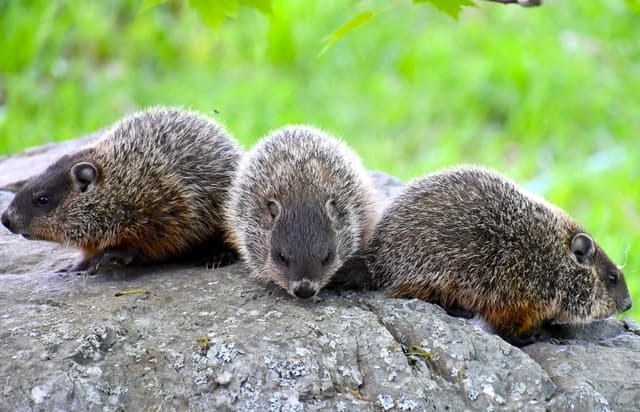 Groundhogs have very interesting social patterns. Even though they mostly live alone, they still work to protect one another and warn other groundhogs of nearby threats. These animals are very solitary but form groups during certain seasons.

The groundhog’s social behavior includes living alone in a burrow for most of the year. The groundhogs seek out others during mating season and live in groups with one male and two to three females. However, outside that time, groundhogs are territorial and won’t share spaces with each other.

There’s a lot more to learn about groundhog’s social behavior. These animals have unique communication patterns and more that they use.

Do Groundhogs Live Together in Groups?

Most of the time, groundhogs are solitary animals. However, they live in groups during their breeding season. The groups usually consist of one adult male and at least two adult females, plus their offspring.

The females are friendly with other females, and the males stop by occasionally to check on their young- they don’t live with them. However, they may spend the night in their burrows sometimes.

Overall, groundhogs live together in groups, but they don’t live in them all the time. They remain alone for a majority of the year, then form very small groups when they have their young. After the babies grow up, the groundhogs disperse and return to their burrows. So, most of the time, you’ll only see one groundhog at a time.

How Many Groundhogs Live Together?

Not many adult groundhogs live together during the breeding season. An adult male will form a social group with a few females who live together without the male. The females also have between two and six babies, although they can potentially have more in a single litter.

The newborn groundhogs live with their mothers for a few months in the burrow. The father does visit occasionally, but he technically doesn’t live there all the time.

So, on average, you can expect between six and fourteen groundhogs to live together when they have their babies. That will be if two females and their litters are in the burrow. However, some males can have more than two partners, so more groundhogs end up in the same space.

Burrows with many groundhogs living in them can become extremely large and complex. They can be up to 66 feet (about 20 meters) long.

When Do Groundhogs Meet?

Groundhogs are most active in the early morning and evening. They emerge from their nests and look for food. While they wander around, the groundhog can run into others of its species.

Groundhogs will only actively look for other groundhogs during their mating season, which occurs in the early spring. Outside that period, the groundhog spends most of its life alone in its burrow. Males can be territorial and may compete to secure their resources.

Overall, groundhogs are loners- they won’t live with others of their species. Still, they seek out other groundhogs to mate and live with during certain times of the year.

How Do Groundhogs Communicate With One Another?

Despite being solitary animals, groundhogs still communicate with each other. They communicate using high-pitched whistling sounds to let others know there is a threat nearby.

Groundhogs are also known to “kiss” each other. Members of the same family do this to share a scent, making it easier for them to recognize their kin. They do this by approaching each other; then, one touches their nose to the mouth of the other groundhog.

They can make many different grunting noises too. Some of these noises sound like “chuck-chuck,” which is relevant to their other name, woodchuck. Overall, these animals have very elaborate ways of communicating with each other.

Lastly, groundhogs might also gnash their teeth together to produce a sound. This chattering indicates that the groundhog is angry and feels threatened, so you should avoid them if they start making this noise at you.

Groundhogs Cooperate To Protect Themselves

Even though groundhogs live alone and aren’t very social, they do watch out for the general groundhog community for their own collective wellbeing. When groundhogs are outside eating, they will take a break sometimes to check for danger. They do this by standing upright, staying very still, and scanning the distance for any predators or potential threats.

If they do see something, they let out a shrill shriek to alert all the other groundhogs so that they can all retreat to their burrows. This shows that even though they live separately, they depend on their community to maintain the safety of everyone.

Do Groundhogs Play Together?

Baby groundhogs sometimes play together, but it’s uncommon for humans to see it. Adult groundhogs don’t play very much. Since these animals prefer to spend their time alone and can be territorial with each other, they don’t have many chances to play.

However, some groundhogs in captivity that people have trained display many different play behaviors. Still, keeping groundhogs as pets in many areas is illegal, so you won’t want to try it yourself.

Adult groundhogs won’t play together- although they might fight over their territory. Like many other baby animals, some young groundhogs may seem to play with their siblings.

How Do Groundhogs Get Along With Other Animals?

Groundhogs aren’t friendly to many other types of animals. However, other animals may use their burrows when the groundhog is out. These visitors include rabbits, raccoons, foxes, skunks, and opossums.

Groundhogs can communicate with some other species too. Chipmunks use alarm calls, just like the groundhog- which can recognize them. These two species will listen to each other’s whistling to know when to avoid different threats.

So, even though these two species of rodents are different, they can still communicate with each other. They get along but won’t usually come into contact with one another. Instead, they listen for their warning calls.

Groundhogs are extremely smart animals. They form very complex social groups and communicate with each other using touch and whistling sounds. These creatures also can create burrows together and cooperate.

Their burrows are very complex and usually have multiple chambers and entrances. That way, they have an escape route they can use if a predator enters their burrow. Plus, they also create places to hide inside.

Many think groundhogs aren’t smart since they appear clumsy when moving. However, groundhogs can sprint at nearly ten mph (about 16 kph) when needed. These animals are very intelligent and capable of more than we might think!

Overall, you shouldn’t doubt a groundhog’s intelligence. These animals are very smart, which they display when planning and digging their burrows. Plus, they can communicate with each other and understand what the other means easily.