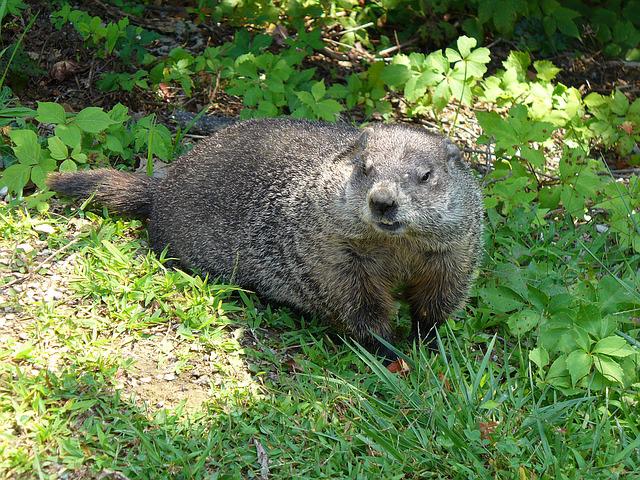 If you have groundhogs on your property, you’ll want to understand how territorial they are. Many wild animals are very territorial and have skirmishes among themselves. However, groundhogs are unique in how they split up their territories.

Groundhogs are somewhat territorial. Males and females live in the same spaces, although they are very territorial when it’s not the mating season. During this season, females live together, and the males visit often. Later, the baby groundhogs leave and establish their own territories.

Overall, groundhogs are territorial. These animals may fight each other for dominance in an area. If you encounter a groundhog, you’ll want to leave it alone because they can also be aggressive towards people.

Do Groundhogs Have Territories?

Groundhogs do establish their territories and live separately for most of the year. They become very territorial and may fight each other to protect their spaces and food. When not eating, groundhogs stay alert and watch for others encroaching on their territory.

Both male and female groundhogs return to the same territory each year after waking up from hibernation. Females live together and form small groups during the mating season, usually with a single male present. Then, the females split up after having their offspring. The females also try to expand their territories during the year.

Groundhogs’ territories only overlap a small amount when it’s not mating season. The males avoid each other completely but may share a small amount of their territory with one to three females.

In general, males will keep each other out of their respective territories through skirmishes. If you see groundhogs traveling in large groups, it’s most likely their mating season.

How Big Is A Groundhog Territory?

The size of a groundhog’s territory can vary depending on how much nearby space is available to them and others of their species. On average, a male groundhog will have a territory between two and three acres.

Usually, one to three females will occupy a small amount of overlapping territory. The males will search for their burrows and sometimes spend the night there.

Groundhogs choose territories that have both forested areas and open grassy spaces. That way, they can move between the woods and a grassy area. Once they create a burrow, they don’t stray too far from it. Most of the time, you’ll find them within 50 to 150 feet (15 to 30 m) of their homes.

In short, groundhogs can have very large territories that don’t overlap much with other groundhogs’.

Can There Be More Than One Burrow In The Same Territory?

There can be more than one burrow in the same territory. Male groundhogs have different territories than the females, so they tend to overlap slightly. A male will visit and mate with the females that share his territory.

Sometimes, two males may also have their burrows in the same territory, although they’re usually very far apart. Males will fight to claim the territory and can be very aggressive with one another.

A single groundhog also makes two burrows for itself. They’ll have one in a grassy area for the warmer months, then another in a wooded area nearby for their hibernation period. So, while few groundhogs share a territory, you may still come across multiple burrows.

Do Multiple Groundhogs Live In The Same Territory?

Multiple groundhogs also can live in the same territory. However, they give each other a lot of space when it’s not their mating season.

Males won’t have overlapping spaces- if they find another male in their territory, they will likely fight with them. However, a male’s territory can include up to three adult females’ territories.

Additionally, newborn groundhogs stay in their mother’s burrow for a few months. They can’t leave home until they’re old and strong enough to fend for themselves and make their own territories. The offspring usually take two to three months to grow up.

Female groundhogs have between two and six babies at a time, so there will be many more present in a territory until they’re old enough to leave. The male may occasionally check on the mother and the babies until they leave the burrow.

Do Groundhogs Venture Out Of Their Territories?

Groundhogs don’t venture out of their territories. They’re very solitary and choose to live in areas far apart from one another. Once a groundhog has a burrow, it won’t stray too far from it unless food is sparse.

Groundhogs also can expand their territory underground by making their burrows larger. They do this to find more food sources and create multiple entrances and exits to the nest. That way, they can escape if another animal comes inside. Plus, they can emerge from the ground closer to their food sources.

Overall, groundhogs won’t leave their territories unless something drives them out. These animals mate and form groups with groundhogs already nearby, so they usually don’t need to venture too far from their homes.

Do Groundhogs Fight For Territory?

Groundhogs will fight among themselves to protect their territory and establish their dominance over others. They can be very aggressive, so you’ll want to avoid them.

Most groundhogs prefer to run back to the safety of their burrows when threatened. However, if cornered in their nest, they become even more vicious.

Groundhogs may also fight over burrows. Strong groundhogs can try to take them from the weaker ones to expand their territory and gain more access to resources.

Will A Groundhog Mark Its Territory or Make Territorial Calls?

These animals make a whistling noise when danger is nearby to alert other groundhogs in the territory. Whistling could include the groundhog noticing a person– or another groundhog that wandered out of their territory in this one.

Even though groundhogs mostly live alone, they still will warn their kin by sounding a whistle alarm.