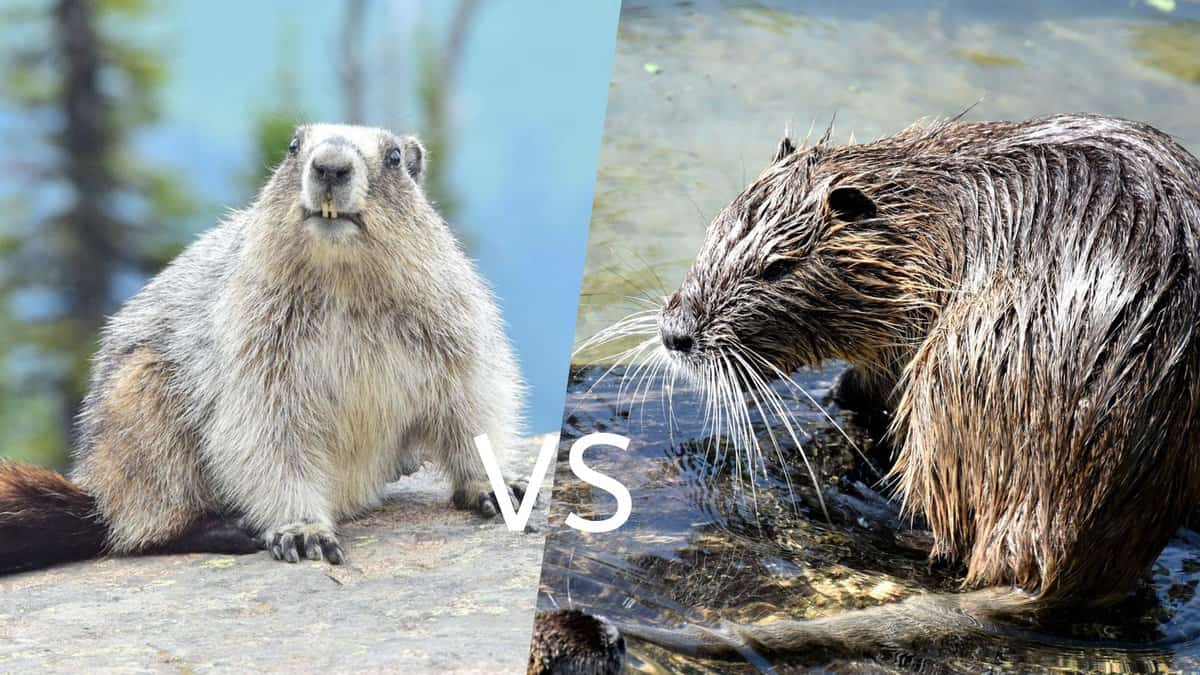 People tend to confuse groundhogs and muskrats with one another because, let’s face it: at first glance, they do look so much alike. For non-experts, it is hard to tell, especially if you are looking at them from a distance, but don’t worry you are not alone.

What’s The Difference Between A Groundhog And A Muskrat?

You don’t have to be confused and wonder anymore, Floofmania is here to help you distinguish a groundhog from a muskrat, and learn about them at the same time!

Upon closer inspection, you will realize that groundhogs and muskrats don’t look quite as much alike after all, except for a few similarities.

Do Groundhogs And Muskrats Have Similar Teeth?

All rodents share the same special feature when it comes to their teeth, they all have four incisors, two upper and two lower incisors.

The two upper incisors constantly grow about 1/16th of an inch per week which means they have to keep chewing and eating to keep the growth in check.

Groundhog and muskrat teeth only vary slightly when it comes to color. Groundhogs have white to ivory-colored teeth while muskrats have a special layer of enamel on their front teeth that causes them to turn yellow or orange.

Muskrat teeth and mouth are designed for underwater chewing because their lips can close over their large front teeth so they can keep gnawing without water coming in. Their 4 incisors overlap so they can cut and chew aquatic plants easily.

How Big Are Groundhogs Compared To Muskrats?

Groundhogs are 2 to 4 times bigger than muskrats, it’s like comparing a tiny mouse to a big cat or David to Goliath.

Groundhogs weigh about 10 to 17 pounds while muskrats only weigh between 1 to 4 pounds. Muskrats are tiny!

Groundhogs can grow up to 2 feet long and 1 to 2 feet standing up while muskrats are the size of a rat growing only up to 15 inches long and 5 inches standing up.

Do Groundhogs And Muskrats Live In The Same Habitats?

As we delve deeper, their difference becomes more pronounced, especially when it comes to their habitat and food sources.

Groundhogs are land animals that live in woodlands and plains where, as an herbivore, they can thrive and not run out of food. They live in land areas where there is plenty of vegetation because they feed on grass, plants, leaves, bark, roots, and trees.

Muskrats, on the other hand, are semi-aquatic animals that live most of their lives in water. They live in streams, rivers, lakes, ponds, and other bodies of freshwater where there is an abundance of aquatic plants, fish, and mussels.

While the two rodents may look somewhat similar, they live in very different habitats, and it’s unlikely that they ever meet in the wild!

Are Groundhogs And Muskrats Related?

Groundhogs and muskrats are related because they are both rodents and share the majority of the features most rodents have.

Although they belong to the same order and share some physical similarities, groundhogs and muskrats are not as closely related as you might think.

Would Groundhogs And Muskrats Ever Fight?

Groundhogs and muskrats can fight but the possibility of it actually happening is very low because they hardly cross paths. They don’t share the same diet, their habitats don’t overlap, and they are not active at the same time.

On the rare instance that they do cross paths, they simply go their separate ways unless there are special circumstances that put them up against each other.

The possibility of a groundhog and muskrat fighting is very low to zero but in case they do fight, groundhogs have better chances. Muskrats are at a disadvantage; they have poor eyesight, their legs are not balanced, and they are slow on land because they are more adapted to moving in the water. And then they’re just way smaller!

If the muskrat could take the fight to the water, on the other hand, it would probably easily win!

Do Groundhogs And Muskrats Have Differences in Behavior?

Groundhogs and muskrats may share some rodent-like similarities, but it ends there.

Groundhogs are active during the day, foraging for food like plants and tree roots, and retreat to their burrows to sleep at night.

Meanwhile, muskrats are nocturnal animals that hunt at night and sleep in their hideouts during the day. Muskrats eat mostly aquatic plants but they can also sometimes eat small fish and mussels when the opportunity presents itself.

What Are The Natural Predators Of Groundhogs And Muskrats?

Because of their size, their ability to burrow and hide underground, and their agility in climbing, and swimming, groundhogs do not have a lot of predators. Their few predators include coyotes, foxes, domestic dogs, and of course, humans who consider them pests and use chemicals to terminate them.

Muskrats meanwhile are very low on the food chain. Like rats, they are considered foundational prey and are an important food source for many animals in the wild.

The list of predators of the muskrat is long; it includes almost any carnivore that is bigger than them. The list includes large fish, snapping turtles, foxes, coyotes, minks, raccoons and so many others.