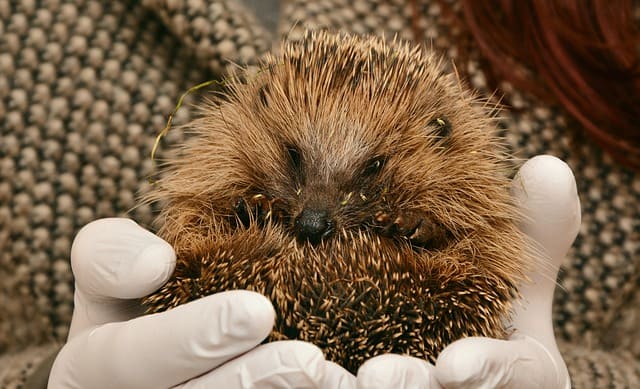 I know for certain that, barring a certain pop culture icon who’s blue and runs fast, most hedgehogs aren’t what most people expect. They’re small, spiny, and sniffy. You can rest one in your palm and are often kept as pets in various homes.

The name “Hedgehog” comes from their scavenging habits, as they like to burrow into undergrowth akin to moles as they search for food. Hedges, bushes, roots, that sort of thing. They like to dig for insects, worms, snails, mice, and other small creatures to feast on. They also really like to “hog” their food if you know what I mean.

Circling back to the pet angle, it is worth noting that yes, they do make good pets for children. They’re small but surprisingly athletic. See, most hedgehogs are nocturnal creatures who can run for several miles, climb and swim with surprising skill, and generally like to move around. If a prospective hedgehog owner is thinking of getting one, then they’ll have to consider their diet and exercise needs.

As for the diet, I wouldn’t worry too much about it beyond anything that’s unhealthy. Hedgehogs are omnivores, like humans, and will happily chow down on anything within reach. So, finding and picking food is fairly easy for hedgehog owners.

When getting a hedgehog, it is important to try to get a young one, so it will have an easier time trusting an owner, as an older one will most likely have developed to the point where they are prickly about who they like. In addition, hedgehogs are also nocturnal, as stated before, and tend to do things in the evening hours. Not a problem for night owls, but early birds? Perhaps Hedgehogs aren’t the best pet for them.

But, while there are challenges to keeping one as a pet, the same could be said for any animal. Dogs and cats included. Hedgehogs are cute little critters that enjoy being held when placed in trusted hands. And, for children, it’s a good way to teach them discipline and care for something smaller themselves, but be warned of the additional danger of the hedgehog’s spines. While it is doubtful if they could cause any true damage, they could still hurt a child a great deal.

But what are they? Well, in any case, let’s break it down into a few different subjects to keep the information clean and clear.

First off, are they rodents or not? According to many sources and scientific experts, the answer is no. See, a rodent belongs to the order Rodentia, which most mammals belong to. Mice, rats, squirrels, and so on, belong to this family tree.

A hedgehog belongs to the Order Erinaceomorpha, which is a descendent of the Eulipotyphla order, which is composed mostly of moles, shrews, and so on. Think of this family tree as round creatures, with poor eyesight. Like the aforementioned mole, or the hedgehog. Also, surprisingly, Hedgehogs aren’t related to porcupines at all, despite their relatively similar appearance. Just because they have spines doesn’t mean the two know each other.

Porcupines are more closely related to rats, squirrels, and beavers than hedgehogs, as they belong to the rodent classification, while hedgehogs are not.

In addition, their behaviors are completely different from each other. A hedgehog will roll into a ball when they feel threatened, but a porcupine will arch its back and stalk the threat. Their quills also serve different functions.

A porcupine will stick their quill into a predator, and it will remain there even after the porcupine retreats or leaves. Getting a quill out of a body is quite complex and difficult, due to the barbed nature of the porcupine’s quills. A hedgehog has a much less brutal defense system, in that its quills will remain in its body and are more designed to prevent say, a bird, from scooping them up.

Well, to be perfectly frank, yes. Hedgehogs, as they are, are in fact mammals. The classical definition of a mammal-based creature is the appearance of fur or hair and having been nourished by females when they are young. What separates them from other mammals in this class is the evolution of defensive features, aka, the quills on their backs.

Given the fact that Hedgehogs are warm-blooded, haven’t got scales, venom, fanged tongue, or any indication that they are belonging to the reptile or the class reptilia, it can be safely deduced that hedgehogs are not reptiles.

To that end, there are no known connections between hedgehogs and any known reptilian species, as while reptiles do have sharp scales, they do not have quills.

In addition, reptiles lay eggs and have a variety of defensive and offensive capabilities that many mammals lack. For example, a chameleon will change the outward appearance of its scales to blend in with the environment, while say, a crocodile is fully capable of being submerged in water for a long period of time. As a hedgehog lacks any of these features, skills, or traits, they cannot be classified as reptiles.

Now, unlike Mammals and Reptiles, the Marsupial classification does in fact, require some clarification. A Marsupial creature is native to Australia and is known as a “pouched” animal. For example, a kangaroo is a marsupial.

And, while a hedgehog could be mistaken for one, there is one crucial detail about Marsupials that cause hedgehogs to be sorted out. See, when a marsupial gives birth, they take time to grow and develop, kind of like human babies.

Mammals like hedgehogs, on the other hand, are, at birth, pretty much developed already, just smaller than a full-grown one. This is enough for hedgehogs to be classified into the Mammal group.

Are Hedgehogs Born From Eggs?

As they are mammals, nor are they birds, hedgehogs do not lay eggs, nor are they born from them. Echidnas, on the other hand, do. They lay their eggs, and place them in a pouch on the outside of their body, making them, echidnas, closer to marsupials than hedgehogs. Funny how that works, isn’t it? But no, hedgehogs birth their young without a protective shell and are formed mostly fleshy, with unformed quills.

What Family do Hedgehogs Belong To?

The one they’re born in! With a mommy hedgehog, the daddy hedgehog, and with a little sibling too! They live in their little homes, eating whatever mommy cooks for dinner!

Haha, but to be serious, the hedgehog belongs to, as said before, the Erinaceidae family, and more specifically, belonging to the subfamily, Erinaceinae. Belonging to the Erinaceidae family are shrews, moles, moonrats (sadly, they don’t live on the moon), and gym­nures. These creatures are small, dig underground for food, and like to eat pretty much anything they can fit into their mouths.

They are not rodents, as said before. They bear no relation to other burrowing creatures outside of their gene family and are otherwise pretty separate. Even echidnas and porcupines belong to other groups, monotreme, and rodents respectively, despite how often the two are thought of together.

What is the Hedgehog’s scientific name?

The hedgehog’s scientific, or Latin name if you prefer, is, Erinaceinae. Erinaceinae translates to: “Hedgehog.” Yeah, rarely is there such a direct 1:1 conversion, but it does make sense.

The word, hedgehog, comes from the Middle English word: “Heyghoge,” or “hedge.” Because the hedgehog frequents or lives in, hedgeburrows it was given the name hog. With that, the two names come together to form: Hedgehog. Yeah, the English language is pretty much several languages standing on top of each other in a trench coat.

Other names for hedgehogs include Urchin, Hedgepig (because they’re like the pigs of hedges, get it?), and Furze-Pig (which probably means furry pig).

How Many Types of Hedgehogs Are There?

Each of these hedgehogs is placed in different environments all over the globe. For example, the European hedgehog is found, where else? Europe, specifically the northern regions like Britain or Scandinavia. While the Duarian Hedgehog is found mostly in Russia and is listed as endangered. The desert hedgehog lives in desert environments, while the Mesechinus resides in East Asia.

Now, there are not a lot of physical differences between the groups, as each of them has snouts, quills, and eats pretty much anything. The only real differences can be found in basic coloring (to help blend in with the environment better), and paws to help grab the ground. For example, the Atelerix is much, much more spikey than the average one, as it is found in Africa, with a lot more dangerous predators like the Honey Badger, who doesn’t care about what defenses their prey has (A honey badger will stick their head into a beehive, and ignore every single bee stinging it in case you were curious).

In contrast, the Mesechinus Hedgehog has a longer snout to help it sniff out food better.

Now, we all know of a certain blue hedgehog who hangs out with a yellow twin-tailed fox and red echidna, but how are hedgehogs portrayed in other cultures? Like, how did the Europeans, or the Chinese, view the spiny little creature?

Well, like most cultures, the answer varies from place to place. In Europe, most view the hedgehog as a small, no-nonsense, hard-working creature due to the belief that hedgehogs will collect fallen apples and carry them off to their hidden storage. Whether or not they do so is up for debate, but it is interesting. They are also seen as creatures of autumn, as their foresty nature means they like to sleep in woodpiles, bins, or piles of leaves. If you live in Britain, be sure to check your bonfire for any hedgehogs that may have wandered in.

In many Military histories, there have been formations named after hedgehogs due to their spiny quills, such as creating a series of chokepoints along a given path to deter attackers. Other known tactics or creations in the military named after hedgehogs include the Czech Hedgehog, an L- or H-shaped cross-section placed upon beaches or roads to prevent vehicles from crossing over. You can expect to see a lot of movies or video games that recreate D-Day.

In some Oceanic countries, there have been attempts to get a hedgehog to an elected position, but with no success, sadly.

In Balkan, a peninsula in southeast Europe containing Greece and other such locations, Hedgehogs are regarded well in Creation Myths, that they trim and eat the world so it is properly measured, and given a reward of its signature quills. A particular one would be the Veps myth, where they carried dirt with their needles onto a large, empty ocean world, forming land and creating life.

So, yeah, hedgehogs are usually seen as small, hard-working creatures that are sometimes responsible for making sure the world is made correctly, keep on spinning on you little rascals.

So, yeah, those are hedgehogs in a nutshell. Small, spiny little creatures that are unrelated to porcupines, despite the similar appearance, and don’t belong in the Rodent family classification. They belong solely to their Erinaceinae designation, with other such creatures like shrews, moles, moonrats, they aren’t reptiles or marsupials, but mammals due to the fact they don’t lay eggs, nor do they carry pouches on the outsides of their bodies.

Their name comes from the fact they like to forage for food in hedges, bushes, or undergrowth, and they instinctively hog of all their food in order to savor it.

Hedgehogs can be found all over the world, with most being located in northern Europe, but you can find some in Africa or East Asia. They make decent pets, though they are of the nocturnal variety, making it kind of difficult for early risers.