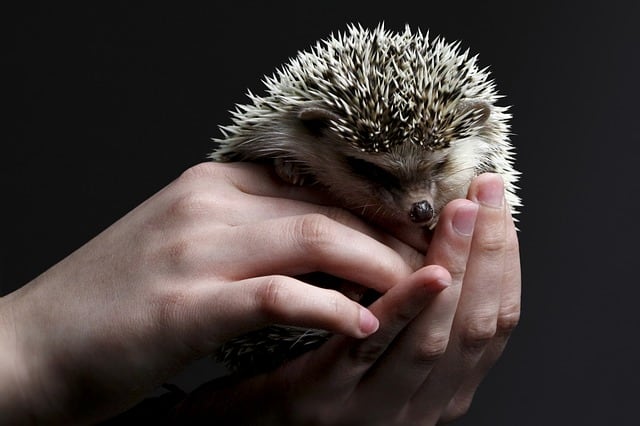 A hedgehog has around 5-7000 spines all over its back. Since the animal is often seen as food by other predators, the spikes help a little in terms of self-defense, making it difficult for most animals to get a good bite in without the predator hurting itself.

The hedgehog will usually roll up into a little, spiky ball, when feeling threatened, and it’ll make all of its spines stand up straight, making them almost impossible to touch without getting hurt. The spines are really quite spiky. On the other hand, if a hedgehog is comfortable around your company, it might relax its spines, so that they lay down, making them safe to touch if you pet it in the direction of the spines and not against it.

A good way to describe what a hedgehog feels like is to compare it to a pine-branch. When you touch it against the direction of the spikes, it’ll hurt, but if you slide your hand in the other direction, it’ll feel quite soft.

So Are Hedgehogs Soft, Prickly, Sharp, Spiky, Furry, Hard… Or Something Else?

Okay, so as I mentioned above, if hedgehog spines are relaxed, they aren’t all that uncomfortable to touch. Some might even say that they feel soft, but I think that might be a stretch.

Compared to most animals, hedgehogs are rough to the touch, and even if you try and handle them correctly, they can be quite prickly.

Hedgehogs aren’t always that spiky, though. As they get older, their spines tend to get more and more “blunt”, and on their bellies, they have soft fur, which is quite nice and fluffy. And while most hedgehogs have hard and sharp spines, some are slightly sharper than others. And then there are baby hedgehogs which are, in fact, born with very soft spikes. At birth, they’re just like thick little rubbery hairs and they only harden in the days after the hedgehog is born.

Time To Get Things Straight – Do Hedgehogs Have Quills Or Spines?

So what’s the difference? Well, “spines” refer to any kind of “hair” that’s evolved to become hard and pointy. Quills, on the other hand, is a type of spine, but generally, it’s hollow and might contain a kind of spongy material on the inside making them great insulators. A porcupine’s quills, for example, give the animal the ability to float on water, making it a great swimmer. Hedgehogs aren’t so lucky.

So the correct term for a hedgehog is “spines”. But many people still call them quills, so let’s just accept that they’re used interchangeably!

Can Hedgehog Spines Get Sofer?

Much like knives, fishing hooks, or the minds of even the best of us, hedgehog spines tend to go blunt in time. When a newborn hedgehog’s spines have hardened, they’re at their sharpest, but as time goes by, the spikes will gradually get dulled by constantly touching its surroundings.

So with time, even the spikiest hedgy will get… slightly less spiky.

Is There Anything You Can Do To Make Your Pet Hedgehog Softer?

Getting constantly pricked by your pet hedgy isn’t fun, so you might be wondering is there’s something you can do to make it a little nicer to the touch?

Well, other than learning to hold the hedgehog correctly, there isn’t much you can do. You can’t really go scratching your hedgehog against rough surfaces, to roughen up their spines, not unless you want it to turn into an angry little spike-daemon. (No seriously, don’t hurt your hedgehog!) And there isn’t really any special “hedgehog softening conditioner” on the market that might make it smooth and silk-like.

Hedgehogs are what they are, and if you decide to get one as a pet, you’ve better accept that it’s a little prickly at times.

The best thing you can do is to learn to handle the hedgehog right. Check out this video:

Do Hedgehogs Have Feeling In Their Spines?

So we’ve gone though how hedgehogs feel to the touch. But what about the hedgehog itself? Can it feel you touching it?

Hedgehogs do, in fact, sense their surroundings through their spines. Think of it a bit like hair. You can feel it in the hair when it’s windy, rainy, cold or hot. And a caress on the hair feels like heaven.

Hedgehogs are quite similar to us in that regard. When you hold the animal in the palm of you hand and you caress it gently in the direction of its spines, the hedgie will feel snug and comfy. Like most animals, petting a hedgehog is a great way of getting to know it and taming it.

Can Hedgehog Spines Hurt You?

Despite hedgehogs being quite spiky and prickly to the touch, you’ll have to really handle it very clumsily in order to get hurt.

Even when a hedgehog rises its spines in its “defense-mode” being stuck by the spines is very unlikely to draw blood. It’s by no means a comfortable experience, but it won’t hurt you unless you’re touching it so hard that you’re hurting the hedgehog at the same time.

Can Hedgehogs Shoot Their Spines?

Hedgehogs can’t shoot their spines. The spikes on a hedgehog’s back are strongly attached to the skin, and unless the animal has a kind of skin disease, mites or is in its quilling period, where it changes its juvenile spines, the spines normally don’t detach.

What you might be thinking about, is porcupines. Most of us have seen cartoons about porcupines who shoot their quills like a projectile. This has led some to believe that real-life porcupines can actually shoot their quills. Well, they can’t. The porcupine can detach its quills quite easily, however, which leaves some quite nasty spikes in the mouth area of the unwise predators who might try and attack it.

Do Hedgehog Have Poison In Their Spines Or Saliva?

Here’s another question that I can easily clear up:

No, hedgehogs’ aren’t poisonous (or venomous, to use the right word). Even if you’re unlucky enough to have be pricked so badly by a hedgehog that the spines penetrate your skin, the animals don’t carry any kind of venom.

A hedgehog’s saliva doesn’t have any venom or poison either, and if you’re wondering if the little spiky critter can breath fire?

Well, I don’t think so, but that’s just because I’ve never witnessed it.

What Are Hedgehog Spines Made Of?

Believe it or not:

Hedgehog spines are made of hair. They’re actually just relatively thick hairs that have hardened and which are sharp. To be more precise, they’re made of a protein called keratin, which is the same protein that we humans have in our fingernails and hair.

Unlike porcupine quills, hedgehog spines aren’t hollow, they don’t dislodge easily, and they aren’t barbed in any way. Porcupine quills are made of keratin too, however.

Hedgehog spines are about 1 inch long (or 25mm) and slightly cone-shaped, being thick at the root and pointy at the end. As mentioned before, the hedgehog has around 5-7000 spines, on its back, but on it’s belly it has normal fur.

Are There Hedgehogs Without Spines?

There’s no species of hedgehog without spines. Some hedgehogs might lose their spines due to disease, infection or parasites.

Nelson the hedgehog is such a hedgie: Because of some kind of trauma experienced in nature, he’s lost not only his spines, but all of his fur, leaving him quite bald and… Sorry-looking.

You can meet him in the video below:

There are other situations in which hedgehogs will loose their spines, however.

One such is “quilling”.

Do Hedgehogs Shed Spines? They Do When They’re Quilling

So other than diseases, stress and parasites, hedgehogs also shed spines when they’re quilling.

Quilling is when a juvenile hedgehog sheds its “baby spines” in order to make way for its new, permanent spines. It doesn’t lose all spines at once, however. The quilling process is gradual and usually takes place between the age of 4 weeks and 6 months, where the hedgehog will shed its juvenile spines little-by-little while new spines grow to fill in the space.

A quilling hedgehog is a little like a teething baby. It’s uncomfortable and frustrating to have its new “big-boy” spikes grow on its back, and in this period, the hedgehog might be a little moody.

At some points in the process, bald-ish spots may appear, but the hedgehog will never go completely bald while quilling.

For some hedgehogs, a second quilling period occurs at around 12 months of age, but it’s not always the case.