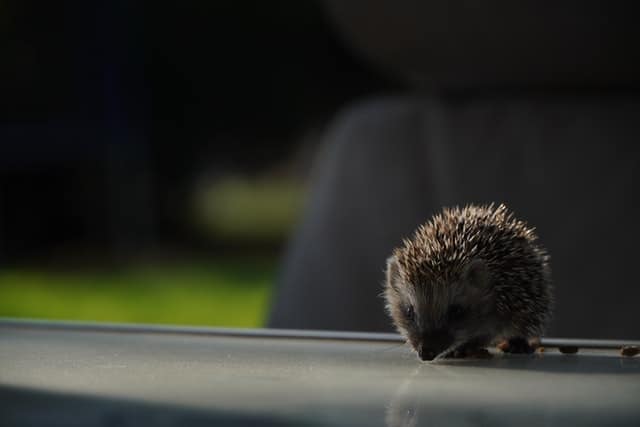 Despite this, they are still known for their outgoing personalities and playfulness. Let’s get to know these cute animals and their daily routines!

What Time of Day Are Hedgehogs The Most Active?

Hedgehogs are active during the night. Wild hedgehogs usually start to search for food at dusk. They can cover a lot of ground and travel over a mile during their nighttime foraging trips for food.

If you’re getting a hedgehog as a pet, you can expect it to be pretty noisy at night. You may expect to see them completing their normal routines once the sun sets, such as eating, sprinting around their cage or using a running wheel,

Generally, hedgehogs are considered nocturnal (active at night) or crepuscular (active at twilight— late evening and early morning). Their day will start when it’s already dark outside. They will wake up on their own, so it is not a good idea to disturb their rest.

Even domesticated hedgehogs such as North American pet hedgehogs retain their nocturnal sleeping pattern. They are more sociable and playful at night, which is also when they eat their food.

Do Hedgehogs Never Come Out During The Day?

There are times that hedgehogs may appear during the daytime, but it is not normal as they are usually active at night. If you see a hedgehog out and about during the day, it’s worth keeping an eye on the hedgehog to see whether it’s moving around or laying still.

If the hedgehog is rummaging about seeming determined about its activities, leave it alone. It may be a pregnant hedgehog looking for nest-building materials, which is something they often do during the day.

However, there are moments when you need to take action. If you find a hedgehog laying down on your lawn without moving during the day, it’s best to call the wildlife center or take it there as soon as possible because it might indicate that something is wrong.

If you come across a possibly sick or wounded hedgehog, put on a pair of thick gardening gloves and gently scoop it up with your hands. Carefully put it in a cardboard box, but make sure it cannot get out because hedgehogs are quite the escape artists.

Provide a small towel or tea towel where it can hide and line the box with newspaper. If the hedgehog is sick or cold, you can put a bottle filled with warm water and wrap it in a tea towel. This will help it warm up a bit. You may give the hedgehog some cat or dog food and some fresh water before bringing it to a rescue center. Avoid giving it milk, however, since hedgehogs are lactose intolerant.

Do Hedgehogs Have Different Activities During The Night or Day?

Yes, there is a huge difference between their day and night activities. During the day, hedgehogs usually sleep and preserve energy before becoming active at night. Pet hedgehogs play, eat, and rearrange their cages at sunset.

If you want to spend time, feed, or handle a pet hedgehog in the daytime, you will notice that it is not as playful and energetic as it is during the night. So better let the hedgie sleep during the day!

Why Would A Hedgehog Be Out During The Day?

Checking the daytime activity of adult hedgehogs for unusual behavior is essential. If the hedgehog is out foraging during the day, it might imply that it is sleep and food-deprived. This is sometimes seen in winter, when the hedgehog has a difficult time getting adequate food for the winter. As a result, hungry hedgehogs sometimes go out in the daytime looking for more food.

If a pet hedgehog is inactive at night, it could be an indication of a health problem. Ask your veterinarian if you’re concerned about your hedgehog’s lack of sleep during the day.

When Do Hedgehogs Go To Sleep, and When Do They Wake Up?

The day of a hedgehog will start at around 6 or 7 p.m. A hedgehog will only be awake for 6 to 8 hours and then will hurry back to its nest to sleep after its routine. Hedgehogs often sleep 16 to 20 hours per day, depending on the individual.

Since they’re nocturnal animals, hedgehogs sleep during the day and are more active at night. This means that the only time you can interact with your pet hedgehog is when it is dark outside. Don’t wake it up if it’s sleeping, that would be cruel!

Do Hedgehogs Come Out In All Sorts of Weather?

Hedgehogs can come out in most weather, except when the weather gets too cold or hot. They can only tolerate temperatures between 72°F and 90°F and will go inactive in either extreme.

When winter approaches, the lowering temperatures impact the availability of food. Exposure to harsh, cold temperatures and the lack of food resources can be fatal for them. To survive and keep their body warm during winter, wild hedgehogs will hibernate.

On the other hand, when the temperature becomes too hot, hedgehogs will go into a dormant state called estivation. They will be moving very little and sluggishly to keep their cool.

There are certain weather situations when hedgehogs find more opportunities to gather food. During rainy weather, food is abundant as worms, insects, slugs, and bugs usually come out from their hiding places.

Hedgehogs don’t mind the rain. They’re even good swimmers if need be. They can take advantage of the weather to eat more food during rainy periods in preparation for the winter season.

They also like warm and dry weather because finding beetles, caterpillars, and snails are more plentiful in the warm months.

How Do Hedgehogs’ Behavior Change Throughout The Seasons?

Hedgehogs can forage for food until late fall or early winter until the need for hibernation occurs. As the temperature drops and winter approaches, the amount of energy it takes for the hedgehog to maintain their body temperature increases. This is why hedgehogs hibernate to save energy and survive the harsh weather.

Hedgehogs don’t actually sleep when they hibernate; instead, they go into a condition of torpor or inactivity, where their body temperature drops to match the environment’s temperature.

As a result, all bodily systems are slowed almost to a standstill, making regular activity almost impossible. During this phase, hedgehogs preserve their energy for up to 120 days.

What Are Hedgehogs Up To In Spring?

Hedgehogs that hibernate throughout the long winter months awaken as the weather warms up in spring. In April, males are said to be the first to rise. After relying on their fat reserves during the winter, they may have to walk up to two miles a night to search for food.

Spring is also when Hedgehogs start to find a mate. The mother hog gives birth to four or five hoglets in May or June, and their mother will then spend months nurturing them.

What Do Hedgehogs Do During The Summer Months?

Summer is when you’re most likely to spot hedgehogs in your yard. As primarily nocturnal species, hedgehogs aren’t uncommon to see in the daytime during the summer, when the nights are short, and the hedgehogs have much to do.

Female hedgehogs give birth in summer. A female hedgehog will be pregnant for roughly 32 days after mating before giving birth. During the pregnancy, the female’s primary job is to construct a nursery nest in addition to feeding herself to stay healthy for nursing and raising her babies.

What Do Hedgehogs Do In The Fall?

Hedgehogs are very busy during fall. After a long and exhausting season of raising their hoglets alone, female hedgehogs are in a rush to gain weight before hibernation.

In fall, hedgehogs spend their time fattening up and continuously foraging for insects, snails, and worms. They also collect leaves to build their nest and try to find a good place where they will stay during winter.

Are Hedgehogs Less Active In Winter?

Yes. During warm winters, hedgehogs can still actively hunt for food but as the winter becomes colder, they will become less active. The need for the consumption of food increases as the temperature declines. More food consumption is essential to match their core body temperature relative to the environment.

But during the cold winter, food is also scarce. This is when hedgehogs will go into hibernation in their specially built nests to preserve their energy and survive until spring.

The hedgehog’s food supply during hibernation comes from the fat deposits it has accumulated during the other seasons. They will reduce their metabolism to make sure that they convert their stored fats to energy slowly.