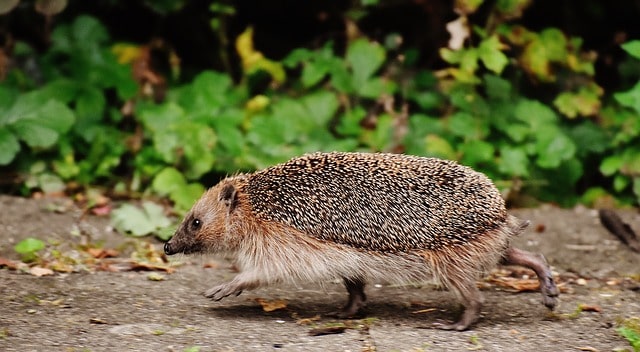 A hedgehog is an animal that typically stays low-key and under the radar (quite literally), so not one you typically hear about. It’s also quite discreet in the way it moves around!

When hedgehogs move around in nature, it’s mostly during the night, while they’re out looking for food.

In the wild, hedgehogs hunt and eat many slugs, insects, and small critters which you might consider pests in your back garden. For this purpose, they use their sense of smell and hearing more, since their eyesight betrays them at night.

This is also reflected in how they move around:

Hedgehogs aren’t quick runners or jumpy attackers by any means, but rather: Slowish little spike-balls that navigate by sniffing and carefully feeling and testing their surroundings with their paws!

Hedgehogs And Their Moving Patterns

Hedgehogs are nocturnal animals, so they only move about at night and are highly active. Here’s a lesser-known fact: hedgehogs are solitary animals, which means they’re quite literally, loners. This also influences how they move, because they aren’t relying on staying in line or formation with a group of other hedgies.

They move about in a random pattern as they’re not territorial, often revisiting the gardens and places that take their liking, so their routine is more of a regular than a scattered one, much like how humans move about!

Since hedgehogs don’t have permanent lodging, they have to move around quite a bit in order to get food, find mates, and look for places to nest.

The range of areas where a hedgehog will normally be found doing that are close-knitted and well connected, so hedgehogs are prone to staying away from far-flung areas. They don’t go that far!

So, if your neighborhood hedgehog hasn’t been sighted for a while rest assured, they’re close by, and there’s probably no need to panic.

How Far Do Hedgehogs Travel?

According to scientific research, hedgehogs are known to travel 1.5 miles at night, sometimes maybe even 2.

Despite this, hedgehogs are used to hiding in the night as per their nature, so they’re pretty hard to find. One could even say that if you play hide-and-seek with them, you’re likely to never, ever win.

However, there is one fact that might be able to help you win.

Compared to other animals in the same size range as a hedgehog, they’re pretty slow when it comes to running speed, theirs being 4 mph.

Bearing in mind that this speed can vary according to the hedgehog’s own size and weight, you should probably not try racing your pet hedgehog.

Hedgehogs are not particularly good climbers. They can climb up hills and inclines, but it’s not very likely that you’ll ever see a hedgehog climb a tree, a wall, or a hedge. They prefer staying with their four little feet safely planted on the ground.

And when you think about it, the hedgehog doesn’t look like a creature that would be very adept at climbing in any case. They’re plump, heavy for their size, and not especially agile, and their little paws are not made for grabbing onto branches or twigs.

Hedgehogs have been known to climb walls by squeezing in between the gutter and the brickwork, but you won’t see them running up a tree without a care in the world like many other wild animals.

Adventurous hedgehogs in captivity might get stuck on ledges and high surfaces, unable to climb back down once they’ve surmounted the high surface. They don’t often venture upwards in the wild, though.

Can Hedgehogs Climb Steps Or Ladders?

While hedgehogs aren’t made for climbing trees, they might be able to climb stairs – at least if they have rough surfaces and steps of a reasonable size.

The steps can’t be taller than a couple of inches, however, and you can forget getting a hedgehog to climb a ladder. It will not happen.

How Do I Keep My Pet Hedgehog from Climbing Out of Its Cage?

While hedgehogs aren’t good climbers, pet hedgehogs might be just in the right environment to be adventurous, which means that they actually can climb over very low fences, especially if they have something to use as a step.

If your hedgehog is kept in a boring and stuffy enclosure, chances are that they’ll get bored very quickly and try to climb out any chance they get.

To counter this, you can buy a plastic tarp to put on the ledges of the cage to keep the hedgehog from gaining enough footing on those ledges, hence keeping it from climbing out. If the problem is boredom, try installing more fun-filled activities within the cage. Make their lives as fun as you want your own to be.

Hedgehogs, like any other pet animal, have feelings and get bored of their monotonous surroundings. In this case, what you can do as an owner, is to give them more attention.

Take them out for walks and let them roam around natural surroundings, for example, a park or a safe natural enclosure. This will make them more at ease and less prone to trying to escape the cage.

Another question that we’re sure has made a home inside your heads is, can hedgehogs move backwards? The answer is no, they cannot. Their spines prevent them from moving backwards hence they get into a lot of situations where they get stuck and have to be rescued.

This is where you guys come in, as their knights in shining sweatpants, here to save the day!