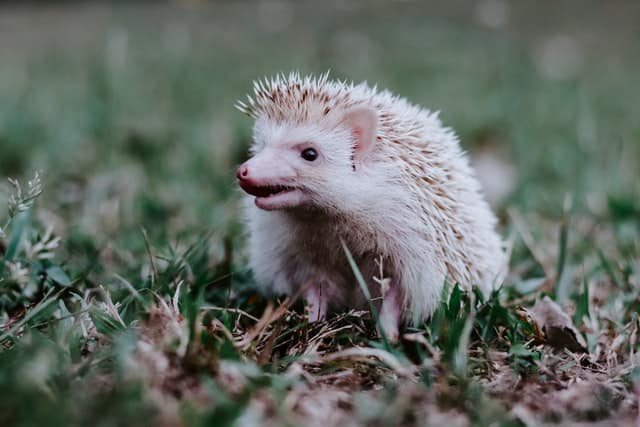 Hedgehogs make a variety of noises, which can vary from high-pitched to low. Hedgehog sounds range from squeaks to grunts to squeals. You may even hear a purr if you are lucky. The sound hedgehogs emit is often likened to ducks or frogs because they are not as common and loud as other animals such as cats or dogs.

There are many different types of noise hedgehogs produce, but one thing all these noises have in common is communication with others. You may hear some noises your pet makes at night because the hedgies will be active after dark when it is cooler outside. If you hear strange screams coming from your garden one evening, it could be because there is a baby hedgehog out looking for food!

Hedgehogs like to be left alone, so they are not as loud or nosy as other animals. That does not mean hedgehogs do not make any noise at all! Hedgehog noises vary in type of sound and volume depending on the animal’s mood.

The most common hedgehog sound is a high-pitched squeak. This noise is similar to the sound you might hear when squeezing a toy duck. If your pet has recently eaten, it may make another type of noise that sounds like quacking.

Here’s a video of a squeaking hedgehog:

The Hog In Hedgehog

Hedgehogs are known to make grunting sounds when scavenging for food at night. The grunts are similar to the noises a hog or pig makes. A lot of people think grunting is an aggressive sound, but a grunting hedgehog is actually a happy hedgehog!

Here’s one that’s sort of grunting. Or maybe it’s just a heavy-breather!

Hedgehogs are most active at night, which means they are more likely to make noise in the evening. Some everyday sounds hedgehogs will produce include snorting, huffing, and purring if you pet them. Hedgehog owners should be aware that these noises can sometimes mean something else!

Hedgehogs do not really scream, but they are capable of producing a variety of noises like the squeaking mentioned above. If your pet is making these sounds, you will want to figure out why. Common reasons that hedgehogs might begin squeaking excessively include illness or injury.

Dry coughing sounds usually mean the hedgehog’s nest is dirty and dusty. A continuous wet lung cough, which sounds like a smokers’ cough, on the other hand, is more serious. Lasting coughs could be a sign that your hedgehog has lungworm.

Get off the internet and make an appointment with a vet!

Sounds Of A Hedgehog Fight

Hedgehogs are solitary animals that live in the wild, but sometimes at night, they may make noise for another reason: fighting. If you happen to hear a loud hissing sound coming from your hedgehog’s cage, it might be time to intervene!

Hedgehogs cannot cry, but they can produce a variety of noises. If you hear crying-like sounds coming from your hedgehog’s cage, it is likely because they are in distress and need help!

Hedgehogs are solitary creatures, but the males will scream to attract females when they need a mate. Just like some humans!

As the male hedgehog circles the female, she will make a chugging sound like a steam train. Makes sense, right?

Hedgehogs are born with their eyes shut and ears folded over, making it difficult for mothers to identify their offspring. As the babies begin crawling towards her belly, she will give a hissing sound that helps them find her to nurse.

Baby hedgies are primarily silent when they first come into the world. Hedgehog babies can make a variety of noises, such as snuffling and grunting. The sound they make when nursing is known as “sucking in the air.”

Baby hedgehogs do not squeak like other small animals do when they’re born – instead, they emit high-pitched squeals like a baby bird, which eventually become more adult-like as time goes by.

You can hear what baby hedgehogs sound like in this video:

A peaceful sleeping hedgehog will often begin snoring. Adorable snoring hedgehogs move their arms and legs just like dogs. During various types of dreams, hedgehogs mimic the noises they would make when awake.

Hedgehogs sneeze as a defense mechanism when they get surprised. The sneezes are harmless, but they can be alarming if you do not know what’s happening. If the hedgehog is exhibiting other symptoms such as coughing or wheezing, then it might be a sign of illness that will need treatment.

Are Hedgehogs Sensitive to Sound?

Hedgehogs have sensitive hearing, and if they are startled by a loud noise, it can cause them to go into shock. It is common for hedgehogs to ball up or become prickly when exposed to new loud noises.

If you are concerned about the noise levels around your hedgehog, it is best to provide them with a quieter environment. Make sure that their cage has plenty of bedding material to burrow in. Placing natural objects near the enclosure can also help reduce stress – try adding plants or humidifiers.

Hedgehogs are naturally curious, so it is a good idea to introduce new sounds around them with care. Rather than playing music in the room, try adding small decorative wind chimes or gentle running water from time to time.

There is no definitive answer to the question, “do hedgehogs enjoy music?” However, you may notice that your pet seems calmer and friendlier after being exposed to soothing sounds. Try playing some of their favorite tunes on a quietly-tuned radio or CD player if they often feel restless.

The sound of a hedgehog is not something you are likely to hear every day, but when you do, it is unique and fascinating. They make several different noises that can be soothing at one moment and alarming in another situation.

If a hedgehog makes noise during certain times or for specific reasons, this could indicate an emergency such as illness or injury. Hedgehog sound knowledge will help you identify when there may be trouble ahead.