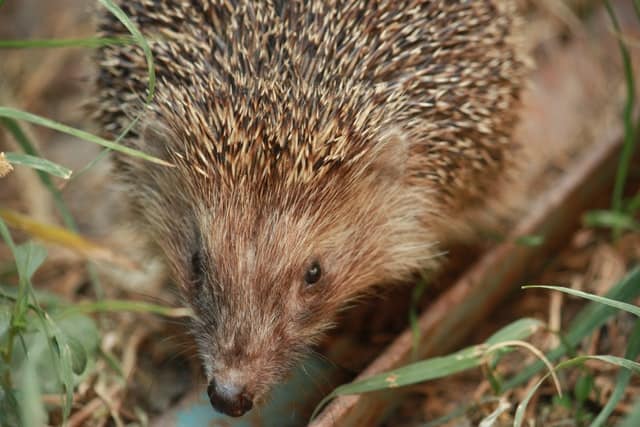 Have you ever wondered what it is like for hedgehogs to reproduce? How do they avoid getting pricked in the process? How do they give birth? And what does the whole gestation period look like for a hedgehog? Find answers to all of the questions you never knew you had about hedgehog reproduction below!

How Do Hedgehogs Give Birth?

It is very difficult to learn about the birthing process in hedgehogs because there aren’t many reports covering it. It is believed that the female hedgehog will lie on either her side or her belly. If she is on her belly, she will have her front paws extended in front of her and her rear end will be raised. She might also have her hind legs spread apart.

Periodically, the female hedgehog will lick herself. As this happens, she will be fighting through transactions and trembling. The babies are inside an amniotic sac similar to human babies and their spines are covered by fluid-filled tissue that is there to protect the mother during birth. (That’s probably a good idea!)

Due to the fluid-filled tissue, the baby hedgehogs can be born tail first or headfirst. As soon as the babies are safely out of the mom, she will immediately turn to eat the placenta and other birth membranes and start licking her babies clean.

The birthing process of a whole litter of hedgehogs can take a few minutes anywhere up to several hours. It has been reported it takes about two minutes per baby. The mother will then remain very close to her babies during the first 24 hours after their birth before leaving to forage.

Here’s a video of a hedgehog giving birth:

How are Hedgehogs Born?

Hedgehogs are usually born in litters of 3 or 4 to larger hedgehogs or 5 or 6 in smaller hedgehogs. When hedgehogs are born, they are born blind. They will have a protective, fluid-filled membrane covering their quills. This will dry and shrink over the course of a few hours.

The babies are born with their spines underneath their skin, and they will look like little pimples. After the babies have been cleaned by their mother, the spines will start to pass through the surface of their skin. At some point, the babies will shed their little spines and get adult spines in their place.

Just like with any other birth, it can be expected for the mother to feel pain during the birthing process.

Some mother hedgehogs can struggle with labor for several hours before delivering the babies. The mothers will not be hurt by the spines of the babies, however, because they are under their skin and protected by fluid-filled tissue.

How Many Babies Will a Hedgehog Have?

Hedgehog litters can range anywhere between one to nine babies. It is most common to see the litters somewhere between three and six babies.

Large hedgehog breeds will usually have 3 or 4 hedgehogs in their litter. Smaller hedgehogs will typically have 5 or 6.

What are Baby Hedgehogs Called?

Until recently, there wasn’t an established word that we would call baby hedgehogs. Some words that were previously used include kit, pup, and piglet.

Some other indications were just young or baby hedgehogs. In the early 1990s the word hoglet was introduced.

Sometimes the word hoglet is also referred to as hedgehoglet, but this is less common. However, since the introduction of this word, it has been adopted as the general use for a baby hedgehog.

A litter of baby hedgehogs is referred to as a prickle. Very fitting!

What Month Do Hedgehogs Give Birth?

Hedgehogs will usually give birth in the months of June and July. It is also possible for the mothers to give birth to a second litter in September or October of the same year.

Mating season starts in April when the animal comes out of hibernation and lasts until September.

How Long Does It Take for a Hedgehog to Give Birth?

When it comes to how long it will take for a hedgehog to finish the birthing process, it depends on both the hedgehog and the size of the litter she is giving birth to.

It can take a hedgehog just a few minutes to birth her entire litter, or it could take several hours. There is no specific answer to how long it takes because each mother is different!

Hedgehogs are very tiny when they are born.

Are Hedgehogs Born with Spines?

Hedgehogs are born with Spines, but they will not be sticking out of their skin.

During birth, the hedgehogs have swollen skin and fluid-filled tissue covering their quills to protect the mother. Over the course of a few days, the skin swelling will reduce, and their quills will start to grow.

They will be sensitive during the process. A little like human babies’ teething!

When hedgehogs are born, they are both blind and deaf. Over the course of about two weeks, their eyes will start to become more defined, and they will start to open. When their eyes open, they will be able to see and hear enough to begin exploring on their little legs.

It is rare to see any kind of birth defect in hedgehogs, but it does happen. They can be born with cleft palates, crooked limbs, missing toes, even misplaced or missing limbs. There has also been a case of a prickle (a littler of baby hedgehogs) having eyes that are overdeveloped.

Can Baby Hedgehogs Survive on their Own?

Baby hedgehogs are known to survive on their own after they have reached eight weeks of age.

Their mothers will feed and nurture them until they are eight weeks, then she will leave them to fend for themselves. Mothers will also leave their babies within the first eight weeks to forage. If you see a nest, it is best not to disturb it or the mother might not return.

How Do Hedgehogs Mate?

It is a very intricate and delicate process for hedgehogs to mate.

The female will put herself into a special, specific position with her spines laid down and flattened. The male will then prepare and mount her from behind.

It has been shown that both male and female hedgehogs will mate with several different partners in one mating season. They’re not exactly monogamous!

How Long Do Hedgehogs Mate?

It can take just a couple of days for hedgehogs to mate successfully, or it can take as long as seven days. Since females don’t have a monthly cycle, they can breed successfully at any time. It is said that females stay in heat for about nine days, then they are out of heat for seven.

Hedgehogs are known to be incredibly noisy when they are mating.

The sound will be similar to a chuffing noise that will be very loud. It has even been said that the noise sounds like a mini steam train engine. It is a very distinctive sound, and you will be able to easily identify it when you hear it.

Do Hedgehogs Have Periods?

Female hedgehogs are referred to as induced ovulators. That means the hedgehog does not have a monthly cycle or a regular period.

If you see blood coming from your female hedgehog, you should seek out a vet immediately as this can be an indicator of a medical problem!

Do Hedgehogs Mate for Life?

Hedgehogs are typically solitary creatures. They enjoy being alone, so they will not mate for life. When hedgehogs mate, the male will not stay around to help raise the hoglets with the female.

That means the mother is completely responsible for raising their babies, and the father will likely not be seen again.

Do Hedgehogs Give Birth or Lay Eggs?

It can be easy to think that hedgehogs lay eggs because they are such pokey animals. However, this is not the case. Hedgehogs are mammals, so they do not lay eggs, they give birth. Hedgehogs are considered to be placental mammals.

Placental mammals give birth to completely developed babies that are ready to experience the world. This means their eggs are fertilized inside their bodies, much like a cat or a dog. Since the babies are born fully formed, they can begin nursing immediately.

It would’ve been smart if they laid eggs, though.

How to Tell a Hedgehog is Pregnant

There are several signs that you will notice when a female hedgehog is pregnant. First, she might start to gain weight and have an increased appetite. The hedgehog will be eating more food to nourish her babies and prepare herself for birth.

Female hedgehogs that are pregnant are also more likely to come around during the day instead of at night. The belly will start to become round about a week before she is going to give birth.

If a hedgehog is pregnant, it will also start to build a nest. This is a huge indicator of a pregnant hedgehog.

How Long Does a Hedgehog Stay Pregnant?

It is most common for a hedgehog to be pregnant for only 32 days before they give birth to their litter. While unusual, the pregnancy can be extended if the female gets pregnant too close to hibernation season.

When the weather starts to get cold, the hedgehogs start to hibernate. If this happens while the female is pregnant, the development of the baby hedgehogs will basically be put on hold, starting up again only when the hibernation is finished.

Are Hedgehogs Safe During Pregnancy?

Hedgehogs are generally safe during pregnancy, but they will likely build a nest to help themselves feel a little safer. The nest will allow the female to get used to the area she is going to give birth and will even add some extra protection to her before she has her babies.

How to Tell if Your Hedgehog is in Labor

When a female hedgehog goes into labor, she will be very uncomfortable.

She might be lying on her side or on her belly. If she is on her belly, you will likely notice that her front paws are stretched out in front of her, and her rear end will be raised. This is likely to increase her comfort level during labor.

It is also likely that she will stand with her hind legs spread apart. During labor, the mother hedgehog will also frequently lick herself. Her body will be trembling, as she is in pain from contractions. It is also possible to hear some noises coming from the hedgehog, such as a juddering or shivering sound.

How Long are Hedgehogs in Labor?

The length of the labor will be different for every female hedgehog, just like it is for every human mother and other mammal mothers.

Do Hedgehogs Eat Their Young?

There may be some cases where a hedgehog will eat their young.

One of the most likely causes is that the mother hedgehog is under stress.

If the hedgehog gives birth in a safe environment, she is not likely to eat her babies. Female hedgehogs will become stressed and eat their babies if they think their environment is not safe.

This behavior is from the survival instinct. If the babies are potentially in danger of other predators, the mother would rather eat them than allowing the predator to do so.

Another reason might be that the hoglet isn’t completely healthy. For example, she might eat a weaker hoglet if it can’t compete with its siblings for milk.