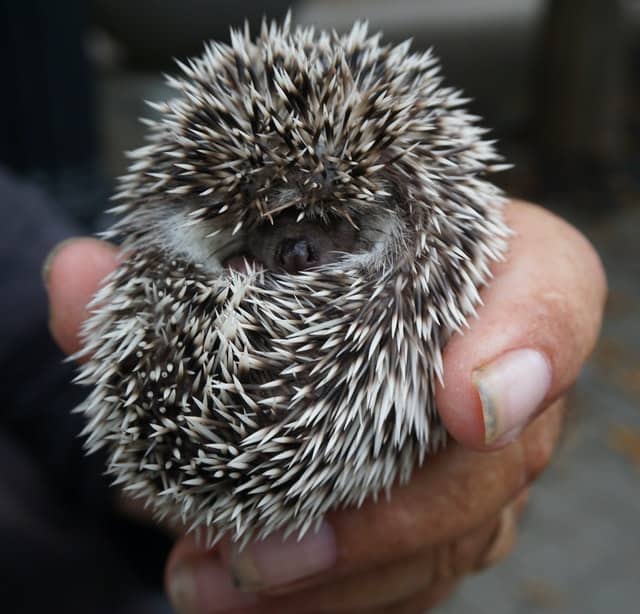 When it comes to confrontation, hedgehogs generally protect themselves by curling into a ball, making noises to warn off any threats, or running away. They rarely fight back against a predator, but male hedgehogs might fight over a mate or food sources.

Hedgehog Defense Mode: Curling Up Into a Ball

While fleeing is usually their first option, hedgehogs curl up if they can’t escape. This action protects their soft underbelly and vital organs while leaving very little except their sharp quills exposed to the outside.

When curled up, the thousands of quills arranged along their spines will raise in response to the danger. Most potential predators that attempt to press the issue will learn a harsh lesson, though it doesn’t work against everything.

Will Hedgehogs Curl Up Against All Dangers?

The short answer is no because their first instinct is to run from external threats. If, however, they feel they can’t outrun whatever’s chasing them or sense another danger, they’ll protect themselves in one of the best ways they know how.

How Long Will a Hedgehog Stay Curled Up in a Ball?

In a given day, hedgehogs can spend three quarters of it curled up in a ball for one reason or another. That’s because, on top of external threats, a hedgehog usually curls up when it sleeps. Being nocturnal and only active for around 6 hours a day. This leaves a lot of ball time.

Why Does My Pet Hedgehog Curl Up Into a Ball?

As mentioned earlier, there are a number of reasons besides immediate danger that a hedgehog will curl up. Stress, sudden movements, or strong emotions can contribute to the act as well as temperature shifts.

Aside from sleeping, pet hedgehogs have been known to react instinctively to things that they may feel threatened by even if it’s just someone getting up or being startled. The most common one is due to temperature or hibernation.

When they’re cold, hedgehogs curl up as a form of internal hibernation because the layer between their body and the quills acts as a sort of insulation. Still, most pet hedgehogs shouldn’t hibernate or have cause to do so.

With all of that being said, if you’re a hedgehog owner don’t be surprised if yours never curls up. In fact, it’s a good thing because it means your hedgehog feels relaxed and safe.

Do Hedgehogs Curl Up When They Die?

This is a yes and no answer, because hedgehogs can curl up when they die but they’re also prone to “splatting” behavior upon death which is lying flat with their limbs outstretched. It can be even more confusing because hibernating hedgehogs may seem like they’re not breathing.

The “splatting” is actually more common for a dead or dying hedgehog because one of the biggest causes of death is heatstroke, so they’ll have less energy to curl up, and lying flat puts their stomach in contact with a cool surface.

Some small animals are known to play dead, like groundhogs or opossums, but the hedgehog isn’t one of them. The closest they come is curling up and remaining immobile, but this is more of a defensive tactic than simply not moving.

Do Hedgehogs Make Any Defensive Noises?

This is the other reason that curling up isn’t playing dead because when they’re curled hedgehogs are known to elicit a hissing sound if they feel threatened. You might see it combine the noise with vibrating its quills, which is all to ward off the predator.

Are Their Fighting Noises Different From Their Defensive Noises?

Hedgehogs make a surprising amount of noise for such small creatures and, while they rarely do when they fight they let loose something between a scream and a squeal.

Unfortunately, the latter means they’re feeling intense fear so you might need to intervene.

Do Hedgehogs Fight One Another?

Absolutely, with the three most common reasons being territory, food, and mating.

During mating season, which is between the Spring and Summer months, male hedgehogs will fight over a mate.

If a source of food is questionable or the supply is scarce, hedgehogs will battle it out over resources. Between those two reasons, territoriality is generally a cause because more hedgehogs in a given area can create strife.

What About Other Small Animals Like Rats, Cats, Dogs, and Foxes?

While hedgehogs are meat-eaters, they’re not likely to attack other animals unless they have absolutely no food source. Usually, they’ll feed on carrion to sustain themselves.

Rats, cats, and dogs are common, but foxes are a known predator of the hedgehog.

With the exception of another hedgehog, it’s the rarest of scenarios where one will fight another animal.

How Do Hedgehogs Fight?

Since the majority of their tactics are to avoid conflict, hedgehogs don’t fight as you might expect. They lower their heads and raise their quills to ram sideways into one another since hedgehogs again really only fight other hedgehogs if anything.

When they do this, they’ll make aggressive grunts and squeals like mentioned before.

It’s worth noting that they might nip or bite you if you have a pet hedgehog, but it’s not from a place of anger. It’s how they learn about their surroundings and people.

Why Do Hedgehogs Fight?

They’re not instinctively territorial like many animal species, but if you put two male hedgehogs in the same space they might fight over food or a female.

It doesn’t help that hedgehogs are naturally solitary, so more than one can create stress.

Another way that they differ as a species is hedgehogs doesn’t fight to protect their young from predators. They’ll evade or run, leaving their young to fend for themselves.

Do Female Hedgehogs Fight or is it a Male Thing?

Males of most species fight more and hedgehogs are no different. While not territorial, they’ll fight over the reasons mentioned earlier but female hedgehogs aren’t known to be violent at all. Since they’re not protective of their young, they really don’t fight over anything.

Do Hedgehogs Fight to the Death?

The quick answer is no, because hedgehogs don’t have the means to fight to the death.

With the way that they fight each other involves bashing their quills against one another, no real damage can be dealt to anything vital.

They might have a few scratches or cuts, but mostly the only thing wounded is their pride after a fight. If you hear a shrill sound, you might want to intervene but otherwise, there’s no reason to worry.

How to Stop Hedgehogs From Fighting

Hedgehogs can have a favorite object or something sentimental, so space that out from any other hedgehogs.

With all of that said, sometimes hedgehogs will ignore their own food dish if they smell another hedgehog nearby. If they do start fighting, don’t grab them because of their quills. Just try to nudge them away from each other with a broom or long object if you have to get involved.

How Can I Tell the Difference Between Hedgehogs Fighting and Mating?

Both situations involve a noisy hedgehog, but there are distinct differences in the sounds they make for each act.

Fighting gets hissing and grunting while mating or hedgehogs in search of a mate will emit a clicking or puffing sound.

How Do Hedgehogs Protect Themselves From Bigger Animals?

Aside from the defensive tactics mentioned above, one more thing that hedgehogs are prone to do when large predators are threatening is to froth their quills. They drip saliva onto their quills for a couple of reasons when they curl up.

The froth of saliva acts to throw off their scent if the predator is a more smell-oriented hunter. This is mostly when the hedgehog hasn’t quite been spotted.

Otherwise, the saliva can also be poisonous when the predator sticks itself on the quills.

What Can I Do to Protect Hedgehogs From Dogs, Foxes, and Cats?

The good news is that most domestic pets won’t harm your hedgehog, especially if they’ve become familiar with the pointy end of a quill.

If you’re worried about an external predator, you can warn your hedgehog with an outside light.

Hedgehogs are creatures of routine and habit, so they have a specific schedule. If you plan to let your pet outside, you can flip the light on a few minutes before to let your hedgehog know.

As far as foxes go, you can try cutting a small hole into your fence large enough for the hedgehog to squeeze through if it has to escape.

How Do Hedgehogs Protect Their Young?

As mentioned with the female fighting, hedgehogs aren’t naturally protective of their offspring. As a balance, baby hogs begin to venture out for food at only 3 or 4 weeks old. The mother will accompany them on these trips, but a week or so later the young are on their own.