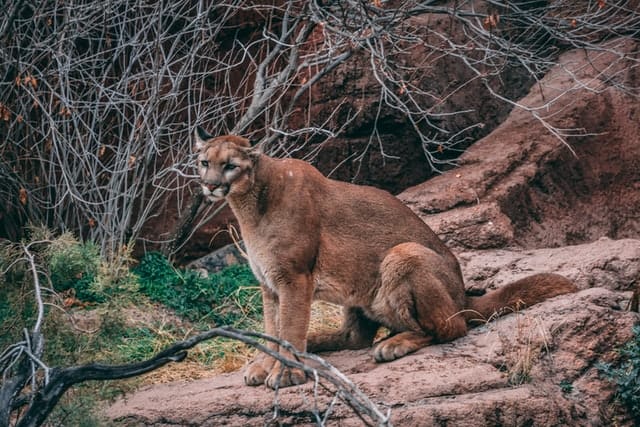 Mountain lions are large, tan cats that live in North and South America. They live in a wide range of ecosystems, including mountains, forests, deserts, and wetlands. They are territorial, have low population densities, and need large wilderness habitats to survive.

Mountain lions are very reserved and rarely come into contact with people, but they can be dangerous and sometimes do attack people.

This stealthy behavior is what makes people more curious about them. Let’s learn about these mysterious big cats!

What Kind Of Animal Is A Mountain Lion?

Mountain lions are considered the largest of the “small cats”. They are solitary animals that are very good at adapting to new situations and environments. Because mountain lions live alone and are elusive, they are hard to study and almost impossible to count.

These dangerous animals look a lot like big house cats with short hair. Mountain lions have short faces and small heads. The animal can jump up to 40 to 45 feet thanks to its strong back legs (12 to 13 meters).

Mountain lions’ bodies are mostly covered in tawny-beige fur, but their bellies and chests are white-gray. Their ears are small and round. Their bodies are long and smooth, and their necks and tails are long.

The tip of the mountain lion’s tail, its ears, and the area around its nose are all black.

The average size of a mountain lion changes a lot depending on where it lives. They are smaller when they live closer to the equator and bigger when closer to the poles.

Mountain lions are obligate carnivorous, which means that they can only eat meat. In North America, mountain lions mostly eat and prefer whitetails and mule deer meat more than any other food. About 80–90% of their diet is made up of deer.

When these predators can’t find any deer to prey on, they will eat any other animal. They will hunt and eat mice, rabbits, and other small animals.

These cats haven’t got a very developed sense of smell, but their vision and hearing senses are extraordinarily sharp, which helps them hunt in the early morning and late evening.

Mountain lions have learned to wait patiently and stalk their prey, so they can run quickly for short chases. Because their spines are flexible and move quickly, these dexterous cats can change directions quickly.

Yes, adult mountain lions are apex predators, nearly at the top of the food chain. They sometimes fight for territory with other predators such as brown bears; however, their biggest threat is humans.

People feared the mountain lion in the 1800s and early 1900s because it could hurt their livestock, so they hunted them. Hunters almost wiped out their population because of their unsustainable hunting methods, but the mountain lion was also threatened by habitat loss due to its habitat being converted into farmland.

Currently, mountain lion numbers in the western United States are more stable than they used to be because of efforts to protect them.

Mountain lions, as a keystone species, control the number of prey animals like deer and raccoons. By keeping the population and range of their prey in check, they also influence the lives of other predators like coyotes and bears.

By ensuring mountain lions have enough space to live, we can indirectly help endangered species like the Canada lynx (Lynx canadensis), grizzly bear (Ursus arctos horribilis), and others.

The scientific name for the mountain lion is Puma concolor. Puma is a Spanish word with Latin origins. Furthermore, in Spanish, French, German, and other languages with Latin roots or influences, the name translates to “mountain lion.”

The big cat belongs to the class Mammalia, the order Carnivora, the family Felidae, and the genus Puma. Based on where they are found, their name may vary.

What’s The Difference Between A Mountain Lion, A Cougar, Catamount, and A Puma?

Nothing. This cat has more names than almost any other kind of animal. But it’s still the same species, no matter what you call it. About 40 English words refer to these cats, such as panther, puma, cougar, catamount, painter, mountain screamer, red tiger, Mexican lion, and American lion.

But why does it have so many names? It is mainly because it lives in a wide range of areas and has been called different things in different countries.

Early native South Americans called it “cuguacuarana,” where the word “cougar” comes from. The Incas called it puma, and that is what most scientists prefer to call them today. But all of the mentioned names are correct.

Mountain lions are most closely related to the jaguarundi and the cheetah as they evolved from a common ancestor 5 to 9 million years ago. This means that they share a lot of features.

These 3 wild animal species belong to the family Felidae, under the Puma lineage, and are all obligate carnivores. They are considered big “small cats” with fast reflexes and don’t have the ability to roar.

In the Felidae evolution, mountain lion’s ancestors moved from Asia to North America after the first ice age. This happened 8 to 10 million years ago when the Bering Strait land bridge connected Asia and North America.

Then, around 6.7 million years ago, the Puma lineage started. The Puma and the Jaguarundi moved to South America during the second ice age via the Panama land bridge, while the Cheetah went back to Eurasia and then to Africa.

Is A Mountain Lion Really A Type Of Lion?

The most common difference between big and small cats is the hyoid bone which links the tongue to the roof of the mouth. In big cats like lions, this has a stretchy part, but in small cats, it’s hard all the way through. The structure of their throats is different, that is why lions can roar but can’t purr.

Is The Mountain Lion Related To The Black Panther?

Black panthers are not actual species. There are instances where an animal’s melanin, the main pigments responsible for the coloration in animals, makes the fur of big cats a lot darker or completely black.

Another point to consider is that there are only four species of Panthera (leopard, jaguar, lions, and tigers). About 5% of the time, the Panthera species turns black, called melanistic.

So if you see a big cat that looks like a black panther, you need to remember that they are just melanistic black leopards or jaguars.