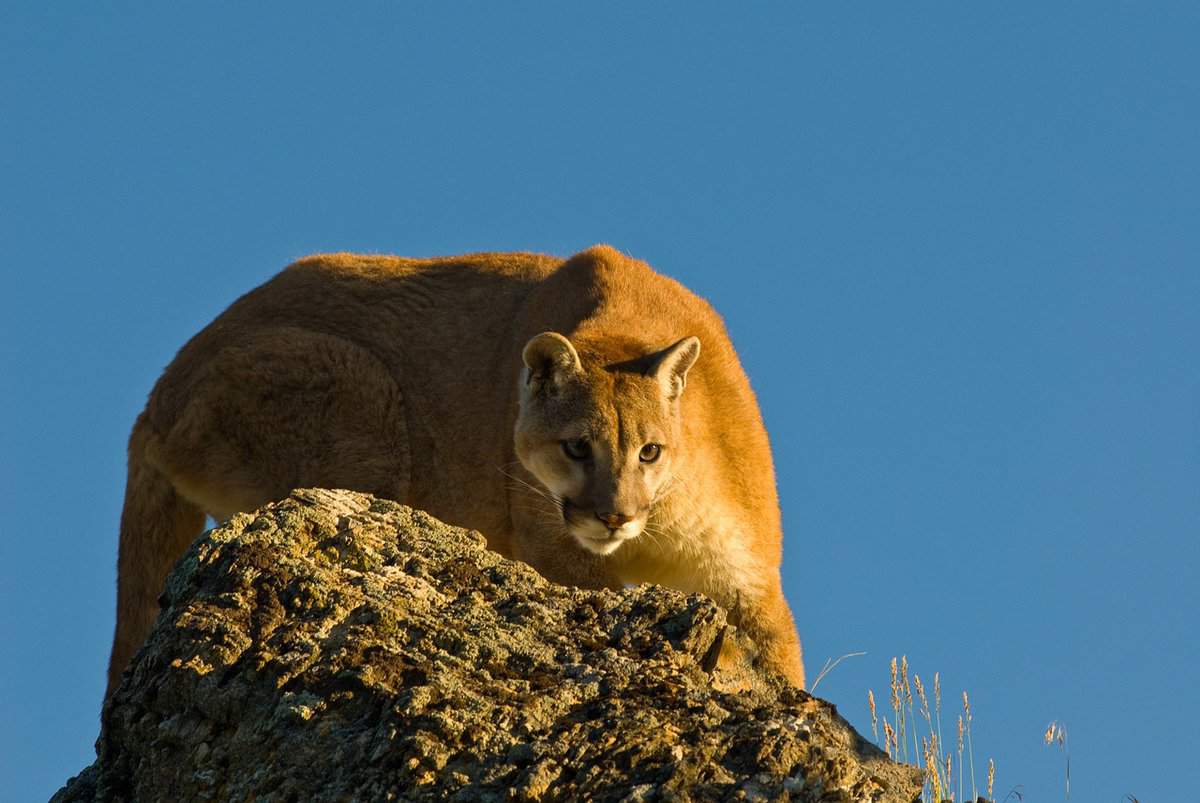 Mountain lions, or cougars, are some of North America’s most powerful predators. They are the largest cats on this continent and aren’t shy of attacking anyone they deem a threat. In some cases, they can even be dangerous to humans.

Although encounters are rarely dangerous, if you decide to take a trip to the wilderness, you should avoid these cats whenever you can.

The best way to avoid cougars is to understand their behavior, such as their sleep schedule and when the animal is active. Like all animals, mountain lions are creatures of habit and follow a consistent pattern in their day-to-day life.

They sleep and hunt around the same time every day, with some variations depending on the season and weather.

If you can understand when they are most active, you can time your outings, so you are least likely to encounter them.

What Time Of Day Are Mountain Lions Most Active?

Generally, you will find mountain lions up and about around dawn or dusk. That means you should keep an eye out for them early in the morning or just before nightfall because that is usually when they are out hunting.

Mountain lions are solitary animals, so they don’t depend on a pack for their movement. Instead, their schedule is based on hunting or caring for their young. That means you should know what animals live in your area if you want to avoid mountain lions.

Mountain Lions Are Commonly Out During The Day Aswell

Cougars mainly hunt and move at night, though that doesn’t mean you’ll never see them out during the day.

Although they spend most of the day sleeping, their sleep cycle is not always a single session. It isn’t uncommon to have a mountain lion get up and search for a more comfortable spot before going back to sleep, which is how some house cats get into more comfortable positions between naps.

Depending on the time of year, they might be out hunting or searching for a mate well into day time.

Are Mountain Lions Nocturnal or Diurnal?

Mountain lions are considered to be both crepuscular and nocturnal. Nocturnal is easy enough to explain, meaning these big cats are nocturnal animals and are most active when the sun goes down, and it’s what some of us know as night owls.

Crepuscular refers to when mountain lions are active, dawn and dusk. Although these big cats can be seen throughout the night, their peak hours are usually just before the sun sets or the morning breaks.

It is also important to remember that many qualities that mountain lions and most cats in general possess are built for nightlife. Night vision allows them to navigate their habitat after the sun sets.

Mountain lions aren’t just active at night because that’s what their bodies are adapted to. It also certainly isn’t because they like the nightlife; they do it because that is when their prey is out.

A cougar’s diet consists mainly of other forest animals, specifically elk and deer, which are nocturnal. Mountain lions have to time their hunting when these animals are out feeding to have the best chance of getting a meal.

Although you might think going after deer while they sleep is easier, it is much more complicated than you think. Elk and deer aren’t stupid; they know they are vulnerable when sleeping, so they take precautions to prevent themselves from getting caught. They’ll intentionally choose secluded areas to sleep in where they can easily see if predators are near.

That means when a cougar wants to eat; their best chance is to wait until their prey is awake and for the deer to come to them. This dynamic means that cougars act primarily as ambush predators.

If you own cats, you should know they love to sleep, and there is no reason why they differ from their larger cousins, such as the cougar. These big cats often rest when they aren’t hunting, nursing their young, or searching for a mate.

Since they are mainly nocturnal, they will find a comfortable place to hunker down and sleep the day away. They only get up if they need something like food, sense danger, or want to find a better position.

What Do Mountain Lions Do in Winter?

For most animals, winter is a time of inactivity and rest due to the cold weather. However, these powerful cats are the exception, and winter is the season when they are most active.

Mountain lions don’t hibernate and instead go hunting like normal. If anything, they can hunt more because the snow offers them a clear advantage over their prey, making it easier to get food.

For one, they can quickly move across snow thanks to their large paws, in contrast to the hooves of deer, which sink into the snow and make them clumsy.

Secondly, they can easily track prey thanks to the snow, which leaves clear tracks. That means elk won’t be able to hide as effectively as they usually do.

How Does The Mountain Lion’s Behavior Change During The Year?

As the weather changes throughout the year, so do the mountain lions’ patterns. They adapt to these times to survive as changing seasons bring different challenges and opportunities.

What Time Of Year Are Mountain Lions Most Active?

Mountain lions are more active in winter because the weather favors their specific senses. Like all cats, these big felines have good eyes and ears but trade that off with a weak sense of smell.

During the winter, these senses are more acute. Thanks to the snow, mountain lions can hunt by sight, because their prey leaves tracks that are easy to follow. The winds are stronger, which makes catching scents easier.

Besides that, days are generally shorter in the winter, which means that the mountain lion doesn’t have to wait for long to ambush prey.

When Is Mountain Lion Mating Season?

There is no definite mating period for mountain lions; instead, they breed and look for mates whenever they feel like it.

However, researchers note that many mountain lions are born during late winter to early spring. So although it is not an official breeding period, late fall and early winter seem to be where most mating occurs.

Do Mountain Lions Come Out In All Weather Conditions?

It isn’t just seasonal changes that affect mountain lions’ behavior; even changes in the weather affect their daily routines. This ability to adapt is key to the mountain lions’ survival. A little like humans, cougars can survive and thrive in most environments with the right resources.

It doesn’t matter if there’s heat, wind, snow, or whatever. If you give a cougar enough food and the means to find shelter, there is a good chance they will thrive and live their life normally.

For example, after it rains, many mountain lions often go around their territory to mark it. As solitary felines, cougars value their territory and will make sure to reapply their scent on their homes, so no one comes close.

Windy weather can work for or against a mountain lion. Since their sense of smell isn’t that strong, the wind is what blows the scents of prey towards them. On the other hand, it can also make hunting harder when there is no wind.

These cats are more active in winter because of the stronger winds, where they have an easier time tracking scents.

How Do Mountain Lions Deal With Extreme Weather?

These cats aren’t built for the heat, so they are less active during the summer. Most cougars only go out at night and focus on ambushes, and the weather affects their diet as they go after more vulnerable prey.

During the summer, these clever cats shift from deer to cattle which are easier to hunt. That is why farmers and local residents have to take extra steps to make sure their livestock and pets are safe.

On the other hand, when the temperature drops, cougar activity increases as they have an easier time hunting.

How Do Mountain Lions React To Forest Fires

Nobody likes fire. Ask anyone, and they’ll say they try to avoid fires as much as possible. Mountain lions are no exception and are pretty adept at dodging forest fires. Since these cats are adaptable to most environments and can travel long distances, they aren’t as severely affected by fires as other animals.

If a forest fire scorches their territory, they will relocate to another area until the vegetation in their territory grows back. However, the danger is if they are caught between burnt areas and cannot hunt.

On the other hand, wildfires can temporarily boost their habitat as the fires can rejuvenate the grasslands. With more grass comes more deer and elk, which means plenty of food for the mountain lions.

How Do Mountain Lions React To Drought

Mountain lions pick their territory based on the availability of food and other essential resources. That means in the event of famines or droughts where those resources are no longer available, the mountain lions don’t have much reason to stick around.

During extreme weather like this, many animals will often leave in search of greener pastures, figuratively and literally. The mountain lions are one of these animals, following their prey like deers in search of a better food source.

This is also one reason why mountain lions will appear near houses or farms. When their own habitat is damaged, they will drift towards the urban areas, especially if they think they can get an easy meal.

How Do Mountain Lions React To Earthquakes

Earthquakes are an interesting case for mountain lions because some scientists believe that they can sense an impending earthquake. The theory that scientists provide is that during an earthquake buildup when the rocks are placed under extreme stress, there is a burst of positive ions in the air.

Like rats and birds, mountain lions might be able to sense this change which is why they often leave their usual territory before an earthquake. They might understand that something is happening and are trying to escape.