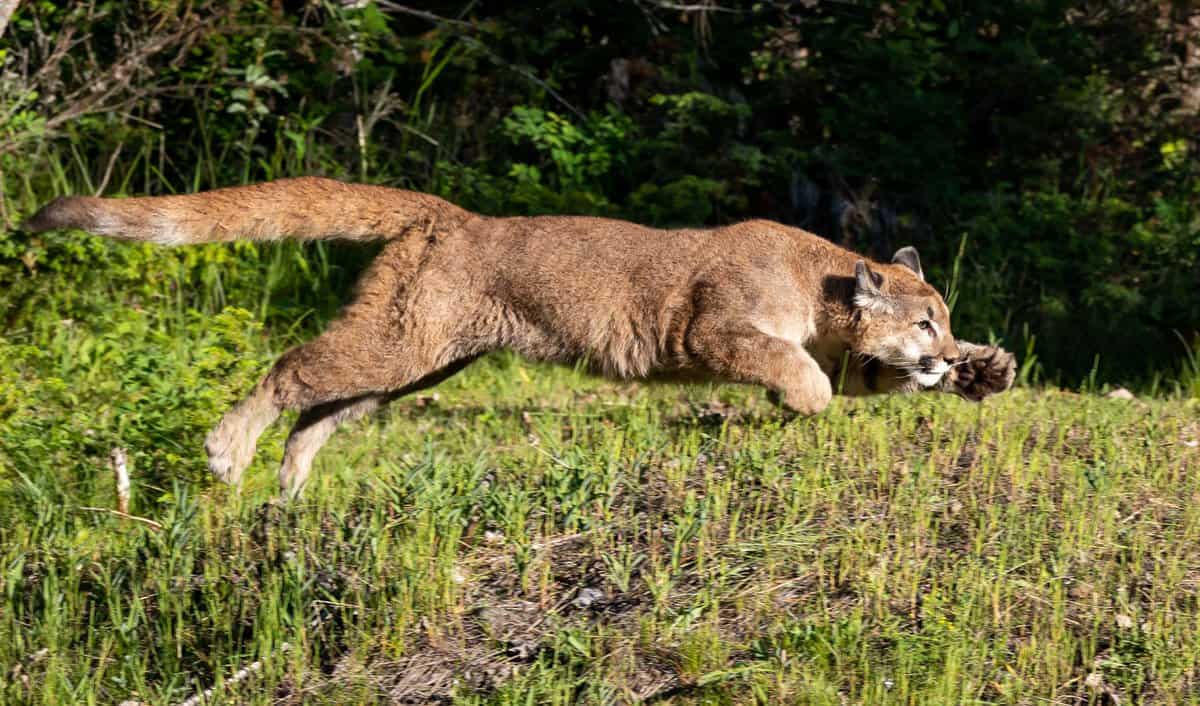 When we think of agility and physical prowess, few animals can match the big cats in that regard. Among them are the mountain lions, one of America’s fiercest predators, thanks in no small part to their natural abilities to climb and leap huge distances.

These fearsome felines aren’t quite as big and strong as tigers or as fast as cheetahs, but that doesn’t make them any less dangerous. Perhaps their most significant asset is their powerful jump.

While it sounds a bit silly, jumping is vital to a mountain lion’s hunting strategy since it allows them to catch prey easily.

Everything is pretty high up in the mountains and forests where these big cats make their home. So to get to the trees or mountain peaks, it seems like animals need wings or the ability to leap and climb.

While there are (thankfully) no flying mountain lions, they instead make their way up through jumping.

Standing at around 2-3 feet tall at the shoulder, and around 5 feet in length (if you don’t count the tail), a mountain lion can jump vertically up to 16 feet, or more than 5 times their height. To put this into perspective, 16 feet is almost the height of the average two-story building.

As impressive as that is, they can also do this at a complete standstill which is essential in the dense forests where they can’t always get a running start.

Reaching that high is instrumental in reaching the tall trees where animals might try to escape. Conversely, tall trees also make the ideal hiding spot for mountain lions to lie and wait in ambush.

How Far Can A Mountain Lion Leap?

If you thought the height they can jump is impressive, the cougar’s distance leaping is breathtaking. While not as fast as cheetahs, these cats have some of the best leaping power, even without a running start.

If they lunge, a cougar can fly about 40 feet forward. That’s the entire length of a school bus, covered in just a single bound.

Even the longest jumps humans managed to do falls shy of 30 feet. Even then, that is the exception rather than the norm, unlike mountain lions.

Can Mountain Lions Jump Over Walls and Fences?

Oh yes, without a problem. Since mountain lions have such a powerful vertical jump, they can effortlessly jump over fences and barriers, trying to keep them out. They can easily climb over fences as high as six feet (and much taller, really).

Even if they can’t directly jump over the fence, their climbing abilities mean they can scale over walls using their claws to climb the surface.

Although this ability is a blessing for our feline friends, it is a curse for farmers and homeowners near their habitat, as standard protective measures aren’t adequate in keeping them out.

There are many reports from farmers of mountain lions getting inside their farms and terrorizing the livestock there. Homeowners have the same experience where they report that the fences aren’t enough to stop mountain lions from getting in and skulking around their property.

Do Mountain Lions Jump Over Streams, Or Swim?

Although it’s a common stereotype that cats hate getting into the water, it doesn’t mean you’ll never see one in the water, especially big cats. Many big cats, such as cougars, aren’t shy about getting in the water.

Mountain lions are excellent swimmers and might need to swim to cross rivers or reach shallow islands to hunt. Deer, their main prey, are capable swimmers, too, who usually cross rivers when trying to escape predators.

This means that these big cats may need to cross rivers in search of them. Aside from deer, they may also prey on river animals such as otters.

However, while skilled swimmers, mountain lions try to avoid going in the water whenever possible. While in the water, they are more vulnerable since they can’t run or leap, which leaves them open to other predators or their prey fighting back.

Mountain lions can use their jumping abilities to get around water to avoid going in. How successful they manage depends on how big the body of water they try to avoid. They can quickly leap over small bodies of water like streams, puddles, and ponds.

Why Are Mountain Lions So Good Jumpers?

All this shows that mountain lions are adept at jumping, but why is that the case? What is different about mountain lions is that they have the ability to leap great distances, and much of that ability comes from their physique, which is geared towards jumping.

Many big cats share powerful hind legs. Mountain lions have the longest hind legs proportional to their body compared to any big cat. Their back legs act as a springboard, allowing them to launch upward.

It also allows them to run at incredible speeds, sometimes as much as 50 miles an hour. This running start is a massive boost in momentum when they leap in the air, allowing them to fly farther and faster.

Although still big cats, cougars are much lighter than tigers or lions, weighing only a fraction of their bigger cousins. While this means they are not as strong they make up for it in agility and speed.

Since they are not as bulky, mountain lions have an easier time pouncing and jumping. They can also reach greater heights because they do not have to carry as much weight.

How Do These Attributes Help Them

The most significant way jumping helps mountain lions is when they are hunting. Mountain lions are ambush predators, meaning they don’t stalk and chase prey, but rather hide and wait for animals to get near enough for them to pounce at them. These cats can easily conceal themselves and take down prey.

In the forests and mountains where they live, being able to jump high gives these big cats more places to hide since they can jump up and hide in tall trees. From there, they can wait for animals to pass by.

Once they are up there, it is crucial to leap far because it gives them more range to move. The jump allows mountain lions to take down animals in a single move before their prey has a chance to run away.

This jumping range gives these feline hunters a tremendous advantage in taking down prey that might try to run. Since they can’t maintain fast speeds for too long, they need another way to take down their prey quickly. Being able to pounce on animals like deer from a long distance can knock them down and prevent them from escaping.