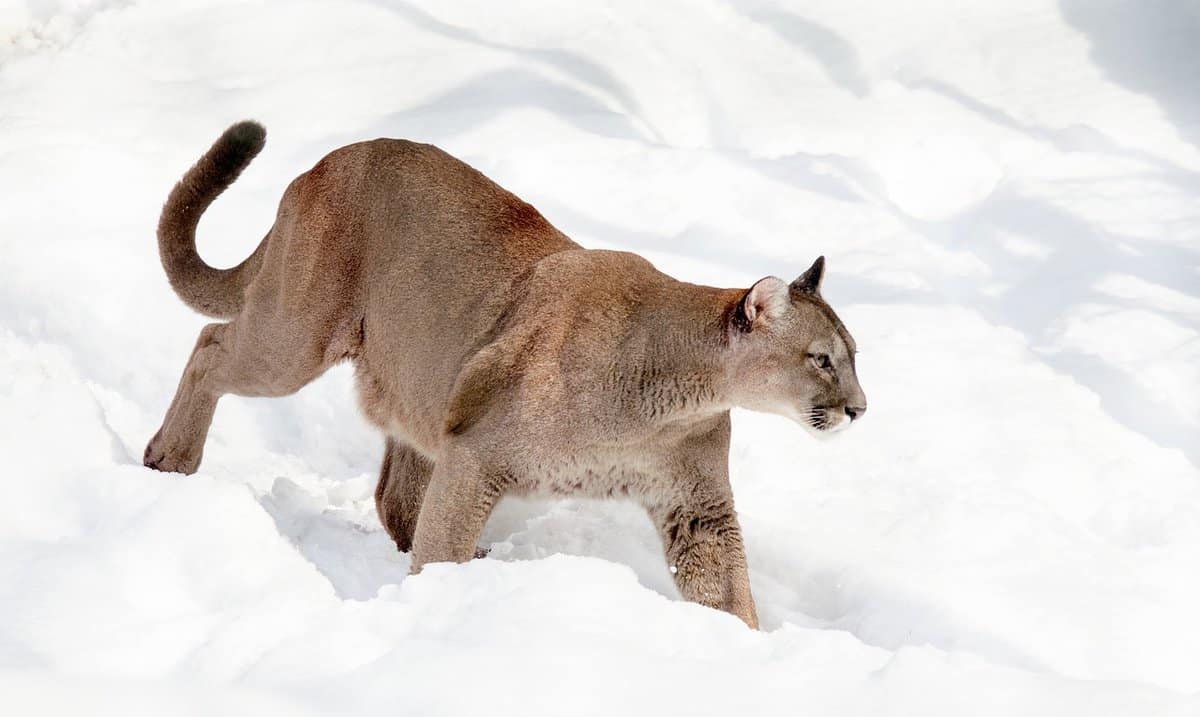 When it gets cold, what do you do?

Many animals become less active or hibernate to save their energy when it’s cold out. Sometimes they also migrate to warmer places.

However, for mountain lions, hibernating isn’t an option. Instead of becoming less active, they take advantage of the snow to hunt for food.

If you want to learn more about how mountain lions deal with the cold, keep reading and join Floofmania in exploring just that!

Where Do Mountain Lions Stay In Winter?

Mountain lions inhabit different places between seasons. They aren’t the types to just stay in one place and wait for their prey to visit so that they can hunt them.

During winter, they like to stay in areas of lower elevations. And during summer, mountain lions occupy places with higher elevations, mostly in wooded areas.

These animals, which are most active during winter, only move to other places and elevations if their prey animals migrate to other winter ranges.

Are Mountain Lions Active During Winter?

Mountain lions are not only active but are actually most active during winter. This is because the snow offers them several advantages over their prey. Thanks to their large paws, mountain lions can quickly move over deep snow, which is more difficult for most of their prey. While their preferred prey animals like deer and elk, struggle to get through the snow, mountain lions don’t.

Their poor sense of smell is another contributing factor. We know how important a strong sense of smell is in hunting prey. Since mountain lions lack in this aspect, it makes it difficult for them to track their prey during the summertime because they can’t detect the exact location of the sounds that their prey are making.

But with snow around during the winter season, mountain lions don’t have to rely on their sense of smell because they can easily track their prey by following their hoof prints or tracks that are visible in the snow.

Mountain lions are willing to travel great distances in search of their prey. Once they find their prey, they will swiftly attack them, usually targeting the neck.

Just like us humans, most animals aren’t particularly happy about going out and facing the cold and the bad weather. Most humans probably wish they could just stay in and hibernate.

However, for mountain lions, hibernating during winter isn’t an option. They do not hibernate as they spend their winter hunting prey, and actually find the snowy conditions advantageous!

Instead of becoming less active, mountain lions use their energy to eat as much food as they can, in order to build up their energy reserved for the whole winter season. This is all possible because of certain adaptations, that make mountain lions the ideal wintertime predator!

How Are Mountain Lions Adapted For The Cold?

Like most mammals, mountain lions have multiple body functions that help them face extreme cold.

The primary bodily function that allows them to adapt to the cold is their thick fur, which keeps them warm. The fur covers most of the mountain lion’s body, including its paws, so they are well-insulated.

Aside from their fur, the mountain lion’s ears also provide protection from the cold. Their small ears prevent heat loss because they have less surface area exposed to the cold wind.

How Do Mountain Lions Deal With Cold Climates?

Dealing with extreme cold isn’t a problem for mountain lions. They do not hibernate in winter and mostly spend their time hunting. They easily navigate through the winter season because of the advantages they have over their prey.

With their large paws, that prevent them from sinking into the snow, and with their bodies heavily covered with fur to keep them warm, they are much stronger than their prey, which is slowly weakening during the winter season because of a lack of food.

Do Mountain Lions Migrate To Warmer Places In Winter?

You might wonder…since mountain lions do not hibernate, do they participate in some sort of migration to search for warmer hunting grounds?

The simple answer is no. Mountain lions are adapted to surviving in cold weather because of their thick fur. They do not have to move elsewhere because their thick fur provides enough insulation. They also have body fat that keeps them warm.

It is also important to remember that the migratory behavior of mountain lions does not depend on the temperature and season. It is largely dependent on the migratory patterns of its prey, which they simply follow.

Will Mountain Lions Fatten Up Before The Cold Months?

Although mountain lions are active in hunting prey all year round, they do not fatten up before the cold months. This is primarily because winter is when there is most food for the mountain lion, not the months leading up to winter.

Mountain lions actually fatten up during the cold months since they can hunt more deer, elk, moose, and even caribou (reindeer) in this particular season.

What Do Mountain Lions Eat In The Winter?

As obligate carnivores, mountain lions only eat meat. As such, they have large and sharp teeth, which they use for tearing flesh.

There is no big difference between what mountain lions eat during summer and winter. Their diet usually includes both small and large animals such as elk, deer, bison, rabbits, and squirrels. But since deer and elk are much more visible during winter, mountain lions primarily feed on them.

Mountain lions also prefer to eat deer during winter because deer are large, and large prey provides them with more energy. This energy will replenish what was lost during the hunt.

Although they primarily feed on deer and elk during winter, there may still be rare instances when you may encounter mountain lions in areas near residential ones, trying to get a hold of your domestic animals.

With this, it’s recommended that you always try to put your pets in areas where mountain lions may not reach them.

Just as we humans try to protect ourselves from the cold by wearing thicker clothes, hats, and gloves, mountain lions also develop thicker fur to keep them warm during winter.

Mountain lions typically lose their summer coats in the early fall and grow thicker coats for the winter, just like the majority of animals that live in locations with cold climates.

Thanks to the two layers of their winter coat, they can retain heat around their bodies and keep moisture out of their underfur.

Do Mountain Lions Change Their Color In Winter?

Mountain lions have two color phases. The first one is a solid tawny or reddish color while the other one is a gray or silver-gray color.

But unlike deer, whose coats change when the seasons change, mountain lions’ color doesn’t. It just so happens that mountain lions who generally live in areas with colder climates have gray or silver-gray coats and thicker fur.

For those mountain lions who mostly stay in humid areas with warm climates, their color is commonly tawny or reddish.