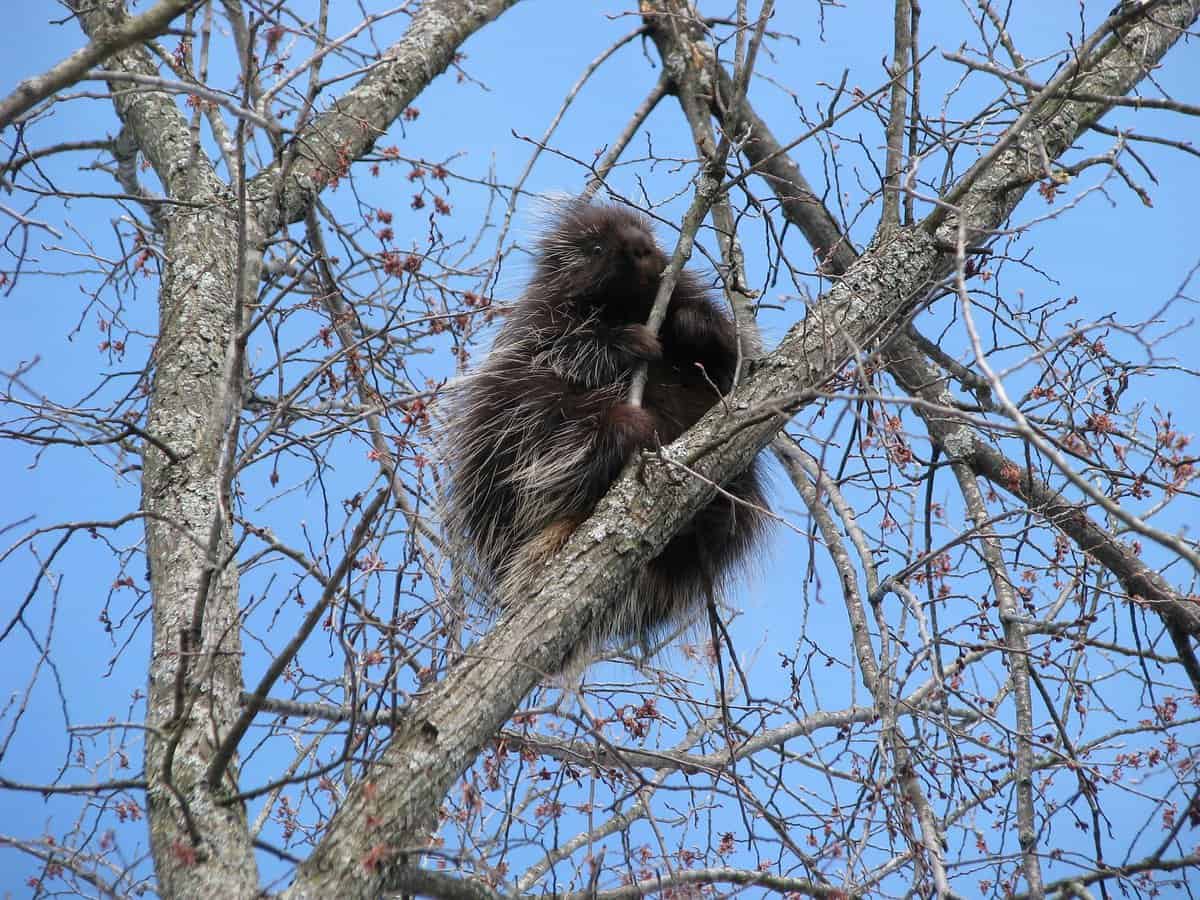 What kind of feet do you think are best suited to a round-bodied, tree-dwelling creature that also travels and forages on the ground?

The porcupine has so many unique features and behaviors and their paws and claws are no exception. Join Floofmania to learn more about the quilled rodent’s feet and how these help them survive and thrive in their environment!

You might be surprised to hear they resemble bear feet! (They’re a lot smaller, though!)

Porcupine feet are flat, elongated, and have dark, pebbly, and completely hairless soles. The front paw is slightly shorter and narrower than the back paw.

The toes or digits are relatively long compared to the foot and almost look like fingers, especially on the front feet. Long, curved black claws extend from the tips of each toe.

Thanks to naturalists and wildlife trackers, we have amazing up-close photos of porcupine feet like these.

The North American porcupine spends a lot of time climbing, foraging, and resting in trees, and so the long digits, claws, and texture of their soles help them grip tree trunks and branches.

How Many Toes Do Porcupines Have On Each Paw?

The front paws have four toes while the back paws have 5 toes each. Only the hind feet have a fifth digit called a hallux.

The hallux is shorter than the other toes of the rear foot. Although it doesn’t have the same mobility as our thumb, it is attached to a flexible pad that allows it to grip. This is essential for an animal like the porcupine, which is known to climb trees.

Do Porcupines Have Webbed Feet?

No, porcupines do not have webbed feet. They swim well though, as their spongy, air-filled quills serve as a flotation aid.

No, they are not. Like dogs, the porcupine’s claws are fixed and worn down with their constant climbing and walking.

How Do Porcupines Use Their Paws or Feet?

The porcupine’s fifth toe on its hind feet, which functions a bit like a human thumb, is used to grip branches as they reach out to grab leaves and buds with their front paws. They also work as ‘anchors’ so the porcupine can secure itself to some branches while eating.

Even though the front paws do not have opposable thumbs, the porcupine uses them like ‘hands.’ They can be used to grab and hold food while the porcupine eats. The front paws can also pull quills from their faces and bodies – very useful when they accidentally get stuck with quills after a fall, or after a fight with another porcupine.

During the mating ritual, the male and female perform something like a courtship dance. This includes the pair rearing up on their hind feet and placing their paws on each other’s shoulders or swatting at each other using their front paws.

Porcupines also stomp their feet when they feel threatened, along with lashing their tails and raising their quills, to warn off potential predators.

Do Porcupines Have Sharp Claws?

The porcupine’s claws are sharp and long. They are about 1.25inches long along the outside curve. Unlike their quills, these are not used for defense purposes though.

What Do Porcupines Use Their Claws For?

The porcupine claws are necessary for their arboreal life. The curved shape helps them hook or hang on to the knots and crevices on a tree with ease. The sharp tips also work to find traction on smooth tree trunks, similar to how a mountaineer’s crampons help him get up slippery mountainsides with his feet.

The claws are also used for grooming, as they are long enough to reach through the layer of quills, undercoat, and top fur– at least in the areas they can reach.

Due to their stocky build, they cannot reach around to their backs and tails to groom themselves there using their claws. Instead, they raise their quills and shake out the dirt (like a dog would!).

In this brief clip we see a porcupine scratch and groom herself using her long claws:

The long sharp claws are also tools for feeding, as these help scratch off tree bark so the porcupine can get to the inner layer of the trunk. These are also helpful in reaching for the tasty and nutritious buds and new leaves at the end of twigs, so the hefty porcupine doesn’t have to venture out too far on skinny branches.

Lastly, the claws on their strong legs are also used for digging to find food and a safe nest. Porcupine damage control guides often suggest building fences about 1.5 feet deep into the ground for added protection against the burrowing of these quiet foragers who tend to invade human property for fruits, root crops, flowers, and even comfortable and safe sheds.

Clear porcupine tracks usually show indentations of the entire surface of the sole and the claws. The toes may point inward as they are pigeon-toed. Sometimes a tail drag mark can also be seen together with the footprints.

The porcupine’s gait or manner of walking is that of a slow walker (also called a waddler or a pacer).

A slow walker or waddler lifts feet on the same side before moving the feet on the other side. For example, the sequence of foot movement is left front, left back, right front then right back, which makes the animal sway or waddle from side to side.

The result is that the footprints form a kind of ladder where each foot lands on its own spot and you can find a unique mark for each foot. Since a porcupine’s front and hind feet look different, you can find where the front paws landed and see separate markings for where the hind feet land.

Compare this to the tracks of a diagonal walker like a dog or a cat, where the walking pattern is left front, right back, right front, and left back. The hind foot will usually land on the print of the front foot on the same side so you will not see distinct prints for each foot.

Check out this short clip explaining the different types of animal gait and the resulting pattern in their footprints.

It takes a lot of training and experience to identify an animal based entirely on tracks. To help assess whether the footprints belong to the shy porcupine, you can rely on other clues like fallen quills, their scent markings, and signs of them feeding on nearby trees or hiding in nearby dens.

Eleanor grew up with rottweilers and pit bulls and loved the James Herriot books about animals as a kid. She thinks animals are endlessly fascinating, and that we can learn a lot from them, all creatures great and small.