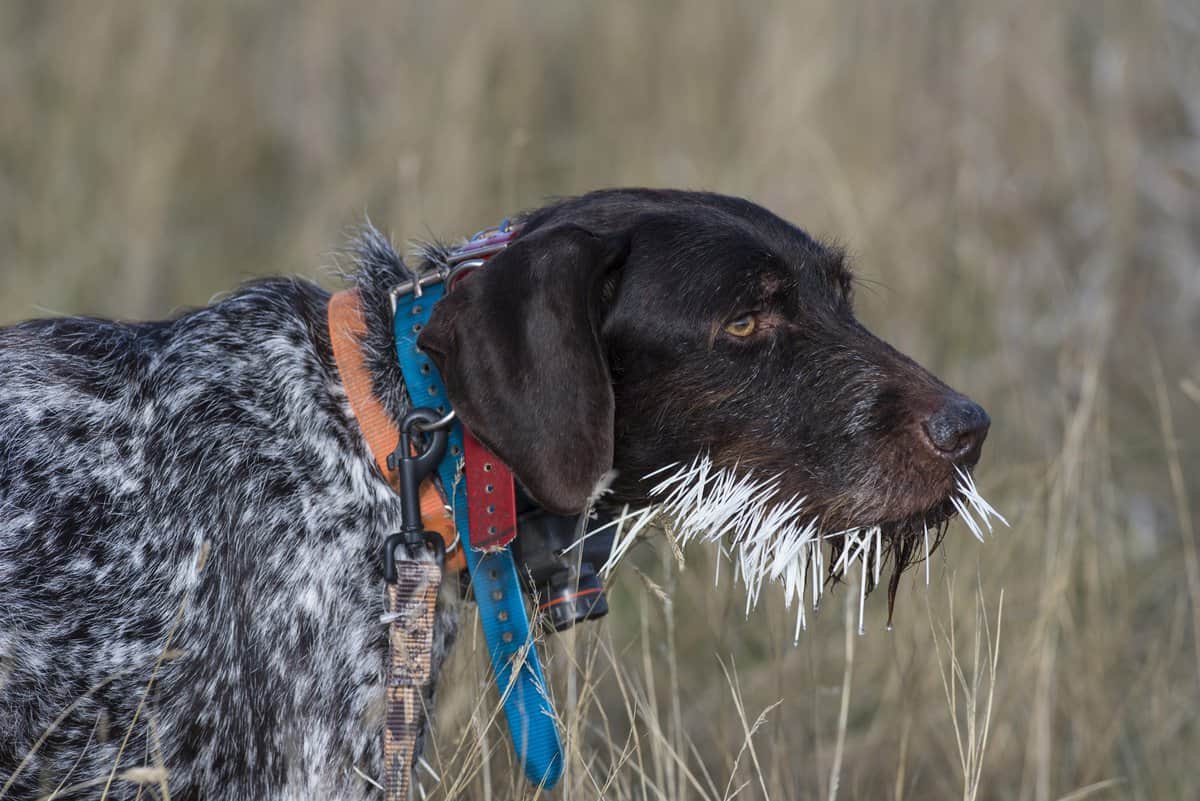 Don’t be fooled by the little innocent face of a porcupine, for this animal knows how to fight when it feels threatened. North American porcupines can be quite dangerous– unless they are given a reason not to be.

When provoked, a porcupine can be a cause for concern because of its pointed quills. Some people are afraid that a porcupine might just fire its quills indiscriminately at an innocent bystander when it is agitated. Porcupines cannot shoot their quills, however, but that doesn’t mean that it isn’t dangerous to get near the spiky animal.

For your safety and reassurance, we will discuss everything you need to know about porcupines and their infamous quills: whether they pose danger to humans and animals alike, and what you should do in case you encounter a frantic porcupine.

A porcupine won’t be the first to pick up a fight in the wild. They would prefer minding their own business rather than messing with other animals. They simply enjoy the peace and quiet of their surroundings.

Porcupines are not aggressive but they know how to stand their ground against a potential threat. Instead of charging right away toward an apparent aggressor, a porcupine would give a warning sign, like putting its quills on display.

In this case, the porcupine is only trying to fend off its enemy instead of getting into a physical fight.

When Do Porcupines Attack?

There is only one known instance wherein a porcupine will go into attack mode: when it is confronted by danger. Porcupines will even attempt to flee as fighting is not really in their nature.

However, if they get cornered, then there is no other choice left but to weaponize their quills to protect themselves.

If you ever chance upon a poor little porcupine in trouble, you might see and hear its teeth begin to chatter. This is the first sign that the animal is about to hit you with its quills as the animal begins to feel anxious.

In some instances, the porcupine will also release a foul odor in hopes of driving the predators away. If ever that act doesn’t work, then it’s time for the porcupine to use its quills and inflict some damage.

A stubborn predator that ignored all the signs will surely bear the brunt of the porcupine’s quills. During a porcupine attack, the porcupine turns it back to flash its quills and then lashes its tail. This is the porcupine’s way to drive the quills into the predator’s body.

Contrary to popular belief, porcupines cannot shoot their quills like long-range missiles. They will have to come in close range to land their quills on their enemies. As mentioned earlier, a porcupine would lash its tail and have to actually come into physical contact with the predator to release its quills.

What Happens If You Get Quilled By A Porcupine?

The porcupine’s quills are sharp enough to puncture the skin of anyone that it attacked. The quills can also potentially perforate the muscles. The worst-case scenario is if you are unfortunately hit in your body cavity because the quills can penetrate your internal organs. This would warrant an immediate visit to the nearest hospital.

Porcupine quills have a special mechanism that makes them very hard to remove from the skin. They’re in fact barbed. This will be explained in detail later on. Another potential risk after a porcupine attack is getting the wound infected.

Some people believe that porcupine quills are infused with venom, which makes the animal seem a lot more dangerous. At this point, we should clear this information: porcupine quills are not venomous. However, they are filled with bacteria that can cause nasty skin infections on the quilled animal– all the more reason to be wary of porcupine quills.

What Should You Do If You Encounter A Porcupine?

It cannot be stressed enough that porcupines are peace-loving creatures. In fact, it has more reasons to be cautious of other creatures, including humans. If ever you have a random encounter with a porcupine, just continue minding your own business and the porcupine would also mind its own.

Still, the best thing to do for the sake of your safety is to keep your distance from porcupines. Remember that porcupines are not aggressive, but they also care about their own safety that can perceive anyone that invades their personal space as a threat.

Even if you have no intention of harming a porcupine that you just met, getting too close can still make the animal anxious.

A porcupine can be paranoid enough to go into self-defense mode. We should know by now what can happen when a porcupine does this, so the smart move is to get out of there as fast as you can. Also, remember that you can only get quilled by a porcupine if you come in close contact with it.

How Do You Remove Porcupine Quills?

There are situations that can still happen no matter how hard you try to prevent them, including getting yourself or your pets quilled by a porcupine. When this happens, there are ways to extract them off the skin safely and with less pain.

For starters, the best way to remove porcupine quills is to seek help from a medical practitioner, who has all the right knowledge and tools to perform the task. If it is your pet who got quilled, then going to the nearest veterinarian would be your best option.

As you wait to get the quills removed, take note of these important do’s and don’ts to mitigate the damaging effects of a porcupine attack:

Why Are Porcupine Quills So Difficult To Remove?

Porcupine quills are composed of very small scales and barbs at the tip. Once the sharp tip of the quills punctures the skin layer, the body heat of the victim would make the barbs expand. Therefore, it is difficult to extract them as it would damage more tissues as you try to pull the quill out.

Victims of a porcupine attack can develop pretty bad skin infections if the quills are not removed immediately.

Those who fare worse can end up having abscesses in other parts of the body that were not even hit by the quills. This is due to the scales on the quill that function like barbed fish hooks, allowing the quill to migrate further inward into the body.

The deeper the quills have gotten in, the worse the resulting infection could be. Hence, you should waste no time removing the quills.

Do Porcupine Quills Work Themselves Out?

It is almost impossible for the porcupine quills to work themselves out of the body. The most likely scenario is that the quill that got stuck halfway to the skin layer would drive deeper and make its way inside.

As stated, it is already a challenge to remove the quills manually from the body. Imagine how more unlikely it would be to have the quills being pulled out of the skin naturally without any external aid.

Can Porcupines Be Dangerous To Pets?

Our pet cats and dogs can be so curious that they will approach anything or anyone that looks interesting to their eyes. For a household pet who has just gotten out to meet new friends, seeing a porcupine for the first time would definitely spark their curiosity. Chances are your pets will approach the porcupine to give it a sniff.

However, porcupines are more likely to misjudge your pet’s actions as a form of aggression. Even if your pets have no intention to harm a porcupine, the latter could be extra cautious, so it would use its quills to attack all of a sudden.

Therefore as a pet owner, you must see to it that your pets cannot escape the house, especially if your area has many reported porcupine sightings.

In the same case as household pets, farm animals can only get hurt from a porcupine attack when they try to come close to this quilled creature. Everything will depend on the mood of the particular porcupine that a farm animal has encountered.

An easily distraught porcupine could attack a farm animal that approaches it, dealing potentially serious quill damage. Nonetheless, a porcupine is most likely to stay passive as the farm animals do their own thing.

There are no known communicable diseases that a porcupine can pass to humans and other animals. The only disease that you can get from a porcupine encounter is a bacterial infection from an infected wound.

Porcupines are also at risk of contracting rabies, which makes the infected animal act violent. Porcupines are some of the calmest animals you will encounter, so you can easily spot the behavioral changes if this animal were infected with rabies.

How Can You Tell If A Porcupine Is Rabid?

A telltale sign of a rabid animal is very aggressive behavior. You can see at first glance whether a porcupine is acting strange, especially when it tries to start a fight without any provocation. To recall, porcupines are calm animals that prefer having no enemies.

You can also check if the porcupine that you have encountered looks disoriented. Another sign of a rabid animal is an overly salivating mouth.

How Do I Keep My Dog Away From Porcupines?

Keeping your pet dogs away from porcupines sounds quite difficult, especially if your dogs are too adventurous and curious about their surroundings. It would be best to keep your pet dogs inside the house to prevent unwanted incidents, like getting quilled by a wild porcupine.

Why Do Dogs Love To Fight Porcupines?

Porcupines hate fighting other animals. They would prefer to sleep and relax over picking a fight with other creatures. However, it is a different story when other animals try to mess with a porcupine.

In most cases, it is the household dog that bothers a porcupine. Hence, you can see many pictures of dogs with their cheeks filled with quills after their encounter with a porcupine.

There is no exact reason why dogs like to pick a fight with porcupines most of the time. However, the dogs’ prey or hunting instinct can be the one to blame here. The dog would show excitement upon seeing a unique-looking animal like a porcupine, but the latter would see that as a threat. Hence, you can expect a fight to break out between the two.

Can Porcupines Be Dangerous In Other Ways?

The most danger you can get from a porcupine is having its quills stuck in your skin. Other than that, there is no other reason to think of porcupines as dangerous animals.