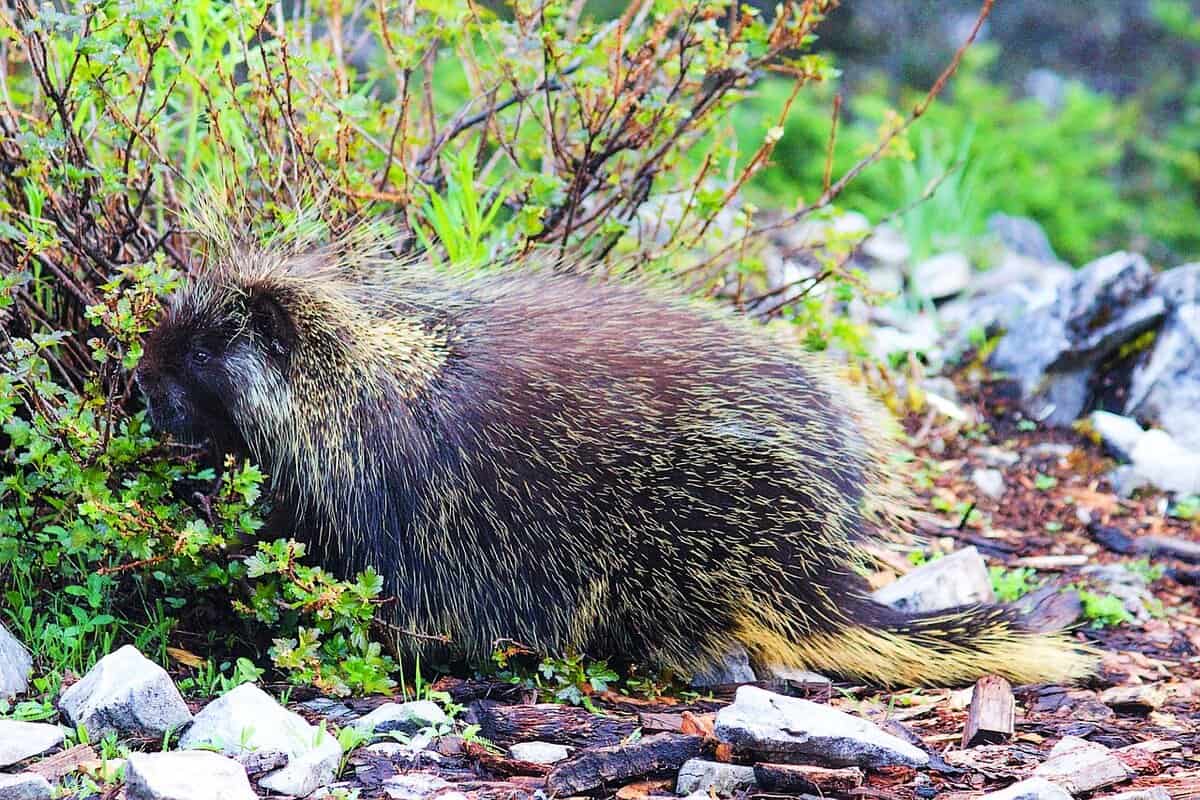 For many animals, the biggest problem they face is getting enough food to survive. Even in the forest where there is plenty of plants and animals to choose from, it can still be a challenge. For that reason, some animals need to get creative to survive.

Take porcupines, for example, they are very skilled at getting food and are master scavengers. They manage to get their nutrients from multiple sources so they are never short on food. This can range from sweeping the forest floor for plants and fallen fruit and nuts or stripping the treetops for food.

It really goes to show how much they understand their environment.

How Do Porcupines Get Food?

Although fierce-looking, our pointy friends are not naturally aggressive, so they won’t attack or take food from other animals. You definitely won’t see them hunting other creatures. Instead, porcupines are herbivores that primarily search for plants that they can feed on.

North American porcupines are natural climbers which means they don’t have to wait for things to fall down to eat and instead go up and strip the tree of what they need.

Porcupines aren’t dependent on just fruits for food, they can eat the bark, leaves, and even twigs if necessary. Thankfully their powerful teeth allow them to eat these tough things without hurting themselves.

Meanwhile, on the forest floor, porcupines sweep the ground for anything edible. They’ll take anything from leaves to grubs, and they may even dig in the ground to try and find edible roots.

Aside from foraging, porcupines let other animals do the looking for them. They are scavengers, so they will visit areas where other animals have hunted and take the leftovers. However, they only do this as a last resort when other food items are scarce.

This method saves them the trouble and danger of finding food for themselves.

What Kind of Food Do Porcupines Seek Out?

As rodents, porcupines are primarily herbivores and make a meal of plants. Their diet consists of twigs, roots, leaves, wildflowers, vegetables, fruits, and tree bark.

To find food, these intelligent creatures sweep the whole forest from the ground to the top of the trees. Thankfully in the woods, there are plenty of items to choose from.

They can find roots, vegetables, wildflowers, and fallen leaves in the ground. Meanwhile, they can get twigs, tree bark, and fruits from the tree tops.

Although primarily plant eaters, some porcupines, in rare instances, eat meat as well. As scavengers, they will feed on the carcasses of dead animals and eat the meat.

Aside from leftover meat, porcupines also eat other small animals. They are also known to snack on insects and grubs they find on the forest floor. Like with meat, this isn’t too common and happens when they don’t have anything else to eat.

What they eat also depends on the time of year. During the summer months, porcupines will go after fruits. On the other hand, during winter, the focus is on food from trees like bark and twigs since they are more readily available.

Where Do Porcupines Go To Find Food?

As forest dwellers, porcupines bases their diet on what the forest provides. They will happily eat whatever is available. As a result, the time of the year plays an important part in where they forage and scavenge for food.

During the warm months, finding food is less of a problem. With the forest rich and plentiful, porcupines are able to just stick to the ground. They will eat whatever they find on the ground whether it be seeds, berries, grass, and whatever happens to fall from trees and bushes.

This is also where they are more likely to eat bugs since they are sticking close to the ground.

One reason why porcupines prefer the forest is because it offers protection. Plenty of shrubs and trees give the rodents lots of hiding places. Porcupines avoid open fields and other high-risk areas because it leaves them exposed.

However, that doesn’t mean that porcupines will never leave the forest. They’ll take the risk and venture out of the woods if they can get a big meal. You might want to be careful if you’re a farmer because porcupines aren’t shy about raiding crops. Porcupines often eat cabbages, potatoes, and melons.

When the snow starts falling, though, the porcupines need to change their habits to survive. With less food falling on the ground, the little scavengers can’t just rely on sticking to the forest floor.

Instead, to get their food, porcupines often climb trees where they can pluck whatever they need off the branches. Over the winter, porcupines will stick to one large tree and continuously gnaw on it for nutrients.

Winter is also when porcupines are more willing to eat meat. They might scavenge an area where a predator has been hunting. If predators are finished eating their prey, porcupines can consume whatever is left behind.

Aside from the meat, the porcupines can gnaw on the bones, an essential source of calcium for these spiky guys. Aside from food, the bones are also helpful in sharpening their teeth for when they eat tree bark.

Do Porcupines Store Food For Later?

No, porcupines aren’t the type to store food away; they’re more of the “eat it when they see it” kind of animal. Even during winter, they won’t keep food in their dens. This method allows them to build bulk and body fat for the colder months. By the time winter comes, over half their body is fat.

This is in part because porcupines don’t hibernate, unlike other rodents. They continue their day-to-day lives as usual during the cold weather. So if they go out anyway, storing food is pointless.

However, with the constant snow, their food is harder to come by, causing porcupines to forage more. The extra weight allows them to make up for any shortfall in food.

When Do Porcupines Forage For Food?

Porcupines are nocturnal so you won’t see one of these guys until nighttime. When the sun sets, porcupines are usually out and about looking for their evening meal, and night is when they are most active and doing regular activities like this.

However, despite sleeping most of the day, they can still go out for a quick snack if they feel like it.

In terms of the seasons, there isn’t much difference with when they forage. Since porcupines do not hibernate, you can see them waddling around year-round. The seasons play a role in their forage since they affect food availability.

Do Porcupines Forage Together With Other Porcupines?

It happens from time to time, but it isn’t too common. Porcupines are solitary animals who value their privacy, and who can blame them? Unless it’s a mother with her children, porcupines spend most of the year alone, so they live alone and eat alone. That doesn’t require them to work with someone else.

While solitary, they aren’t territorial either, and our pointy friends are fine with other porcupines in the area. Researchers have seen that porcupines can forage for food in the same place without a problem. However, even nearby, they don’t always work together and keep to themselves.