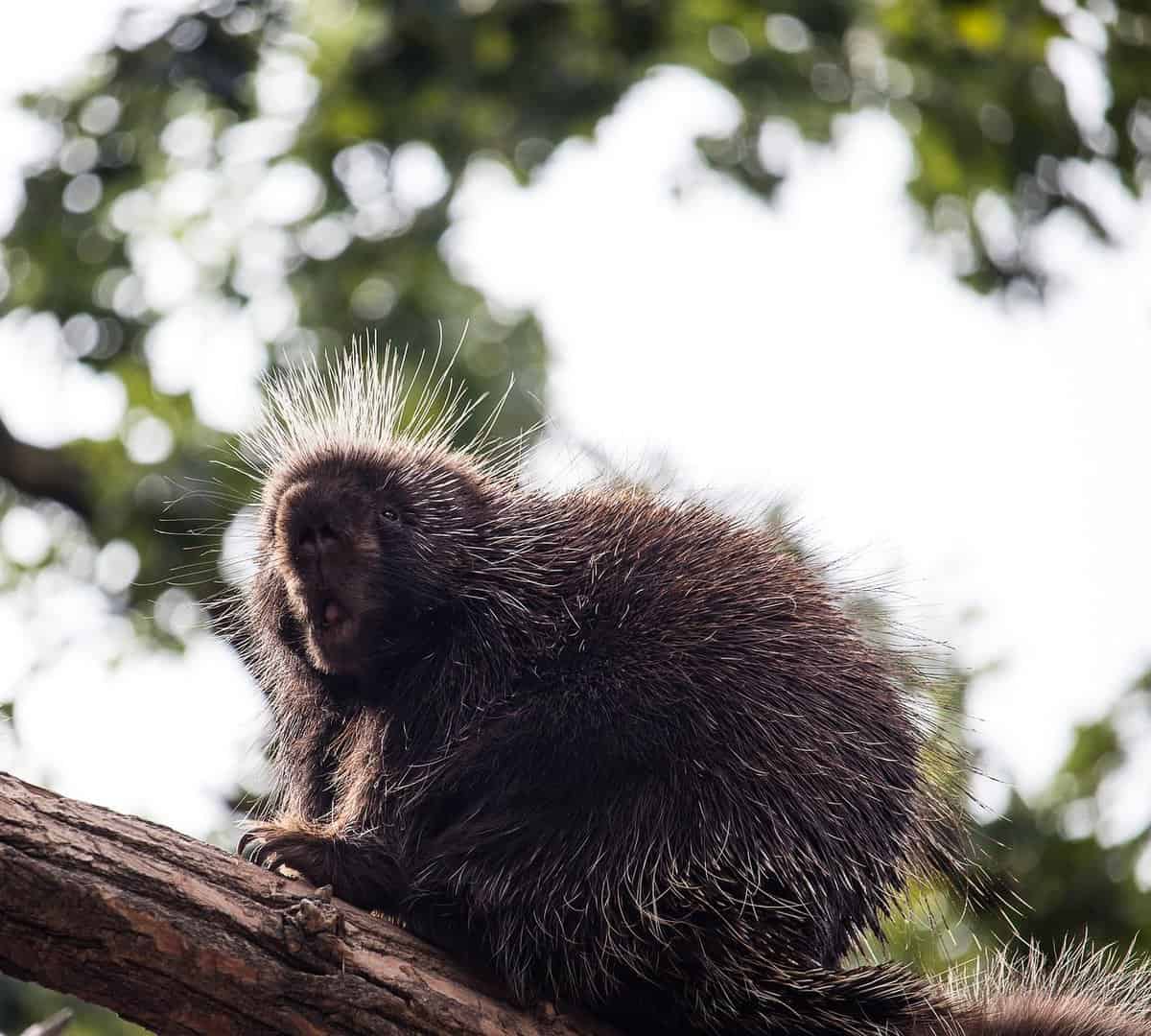 The curious quill pig is one of the biggest rodents in the world. In North America, only the beaver beats it in the ranking of rodents in terms of size and mass. It can weigh roughly the same as a small dog (miniature dachshund) or even up to a medium-sized one (English Cocker Spaniel).

Read on to find out more about how big the North American ‘Prickly Pig’ can get.

How Big are North American Porcupines?

With its stocky body, short legs, and thick muscular tail, the adult North American porcupine’s weight can range from 10 to 40lbs. Total head to tail length ranges from 32 to 46inches.

Let us take a look at how the porcupine grows and develops in size and weight from birth to maturity, the difference between males and females, and how they maintain their size throughout the seasons. Then we compare with other porcupines in different North American locations and other porcupine species around the world.

How Big Is A Baby North American Porcupine or A Young Porcupine?

Porcupines have a long gestation period of about 7 months (just two months short of a human pregnancy!) and give birth to usually just one offspring.

After a long period within the womb, the baby porcupine (called porcupette) is born pretty well-developed, eyes open, teeth complete, and quills that harden soon after birth.  Baby porcupines are born weighing between 1-2lbs, with a length of about 10 inches.

A few hours from birth they are able to follow their mother around, and after a few days they can climb, and within a few weeks, they start supplementing their mother’s milk with solid food, mostly consisting of vegetation. With this rapid development, newborn porcupette weights double just two weeks after birth.

At What Age Is A Porcupine Fully Grown?

While porcupettes wean at three months old and become independent of their mothers 6 months after birth, they reach their full adult weight after roughly 24 months (two summers).

This likely is around the same time the porcupine reaches sexual maturity,  29 months for males and 25 months for females.

How Big Is A Fully Grown Porcupine?

The average length of an adult is 24 to 36 inches from head to the base of the tail. The tail, which when the animal is relaxed would usually be pointing down, extends another 8 to 10 inches. This thick and stubby tail is extremely muscular and very important in the porcupine’s defensive tactics.

Porcupines stand roughly 6 to 12 inches tall at the shoulder. In spite of their low set and unathletic-looking appearance, these porcupines are arboreal and actually spend a lot of time climbing, feeding, and resting in trees. They are very strong climbers.

The quills, when erect, could add roughly another 3 inches in height! Raising their quills in a defensive posture definitely makes them look larger and more intimidating.

How Much Does A Porcupine Weigh?

A fully grown North American Porcupine can weigh anywhere between 10 to 30lbs. The is a pretty wide range which can be easily explained by differences in weight between male and female porcupines.

Are Male and Female Porcupines The Same Size?

No, North American porcupines exhibit sexual diphormism, with the males being significantly larger than the females. The average adult male weighs 22-27lbs versus the average adult female weight of 15-18lbs. The females weigh on average 20–35% less than their male counterparts.

Males also grow faster and have longer periods of growth.

Do Porcupines’ Weight Fluctuate Throughout the Year?

Porcupine weight varies seasonally. In order to prepare for the cold winter months, porcupines feed on fruit, twigs, bark, berries, nuts, and other vegetation during spring and summer. They don’t hibernate so they have to prepare and “fatten up” before winter when they are forced to subsist on just tree bark and conifer needles.

They put on substantial weight during autumn, building up to 50% body fat! Some porcupines have been observed to have an average weight of about 12lbs in spring, versus 20lbs in late fall in preparation for winter.

Are Porcupines Different Sizes Depending On Location?

Sizes of North American porcupines vary regionally. The differing climates, terrain, elevation, and foliage or vegetation available in Alaska versus Northern Mexico for example, cause some differences in local population sizes.

Generally, those in the northernmost, colder geographies tend to be larger than those in the warmer regions. For example, in a study on Alaskan porcupines, the average weight of males in the fall was about 23lbs, and females 17lbs. In an earlier observation during the same season in the Catskill Mountains, recorded weights of male porcupines averaged 12lbs and females at 10lbs.

What’s Considered a Really Big Porcupine? (Is There A Record?)

Male North American porcupines are said to reach up to 40lbs in weight and 36 inches in length from head to base of the tail. There do not seem to be records of these massive individuals though. The Guinness Book of World Records mainly considers porcupine species that are native to other continents. (see below).

How Big Are Different Porcupine Species Compared To The North American One?

North American Porcupines are just one of 58 species all over the world.

The Guinness Book of World Record title holder for “World’s Smallest Species of Porcupine” is the Bahia or Pallid Hairy Dward Porcupine (Coendou insidiousus), found in Brazil. The total length from head to tail is about 27inches, about half of which is the prehensile tail. They weigh roughly 2.6 to 3.3lbs.

Meanwhile, the Guinness Record Holder for “World’s Largest Species of Porcupine” is the African Crested Porcupine (Hystrix cristata), which can weigh up to 66 lbs! It is found in sub-Saharan Africa,  North Africa, and Italy. Body length is estimated at 24-36 inches, with a 3 to 6.5inch tail. What probably adds to the heft of this impressive specimen are the 12 to 13-inch quills along its head and back.

The second largest porcupine species is a neighbor of the African Crested, found in Central and Southern Africa. The Cape Porcupine or South African porcupine (Hystrix africaeaustralis) can be 25-32 inches long in terms of body length, plus 4 to 8 inches of tail. Weight ranges from 22 to 53lbs.