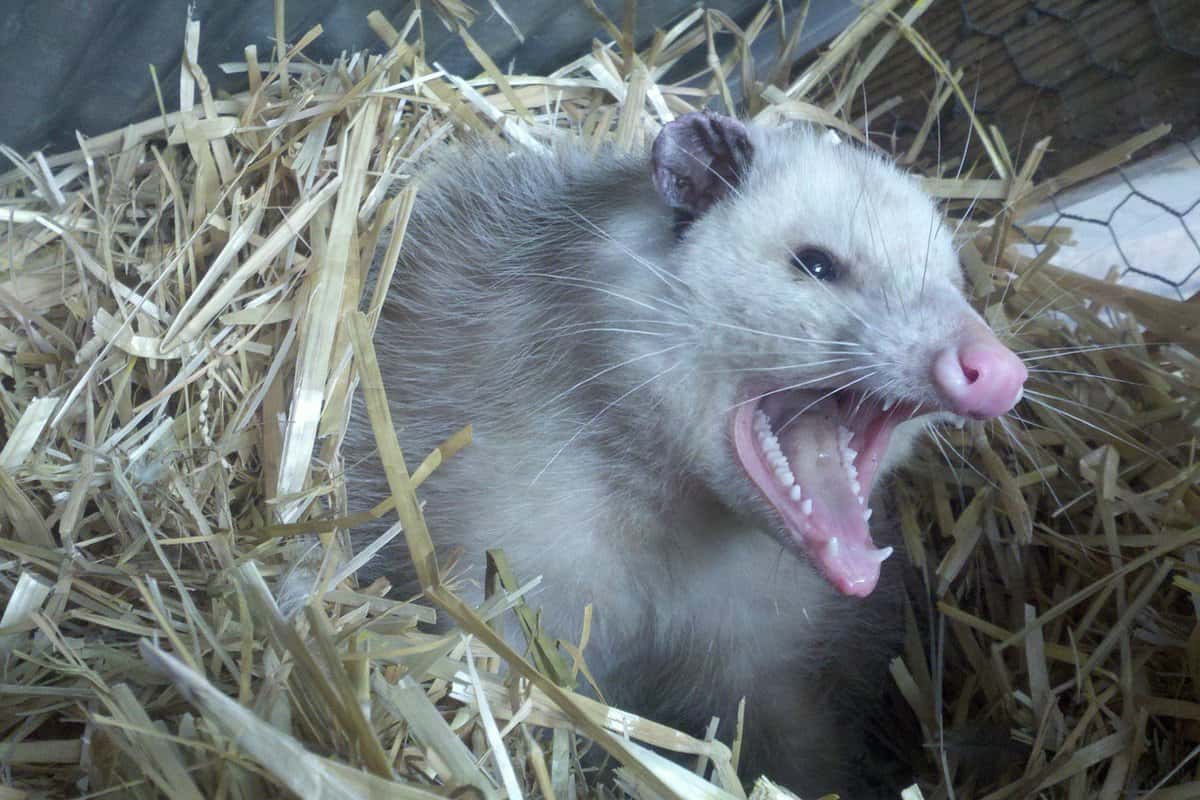 At first glance, an opossum may look like a cat-sized mouse with its pointed snout and hairless tail. Encountering one is startling, especially when it bares its tiny sharp teeth, hissing its heart out. Some people react with disgust at their appearance, thinking they are similar to rats, or worse!

Opossums are found all over North America, in forests and fields but also in the city as part of the urban landscape. They are transient animals that don’t seem to give much thought to where to lay their furry, little bodies.

Let’s look at what kind of shelter these understood marsupials sleep in and how they make their nests warm and comfortable.

Where Do Opossums Sleep At Night?

Opossums sleep anywhere they can feel safe and undisturbed by predators. In the forest, they could be hidden in a tree hole or closer to the ground in the spaces between rocks. In cities or suburban neighborhoods, they can be slumbering in an attic or under a house.

Opossums are nocturnal, which means they become active only when it gets dark. This is because they see better at night. The darkness makes them more capable of finding food and steering clear of predators.

If they live in neighborhoods where people are present during the day, it is understandable that opossums would prefer being out when it is quieter and they can look for a yummy meal in peace. They don’t want anything to do with people.

After a night of foraging, they retire to their dens to sleep and rest when dawn breaks.

Do Opossums Build Their Own Dens?

Opossums are slick opportunists and regularly use dens or holes left by other animals instead of digging out their own. If it’s dry, safe, and sufficiently covered, they move in.

When they find a suitable spot, they gather leaves, twigs, and anything else they can to make the adopted den more comfortable and warm. Opossums have a curious way of gathering nest lining material – they use their tails to grab the leaves despite possessing opposable thumbs.

Opossums are able to dig shallow holes in the ground to enjoy a snack of worms or bugs but they are not inclined to dig deep tunnels or burrows. The thumbs they have are mainly used for climbing trees rather than digging.

Aside from abandoned animal dens or burrows, any existing structure is also fair game to opossums such as:

Other unusual spots that opossums have been known to nest inside are abandoned cars, under seldomly used couches, and in bird houses.

When an opossum moves into a burrow, it will be lined with a messy arrangement of leaves, sticks, and dry grass. In wet and cold weather, building a nest inside a warm house will be even more appealing to opossums.

In urban areas or neighborhoods, opossums still have the same criteria in looking for a place to sleep: It needs to be safe, dry, and covered.

They won’t go into rooms where there is noise and activity but prefer dimly lit parts of the attic, crawl spaces, or garages. They sometimes still bring in the usual leaves and twigs from outside, but usually, they will use whatever is available like bits of wall or ceiling insulation.

Do Opossums Return To The Same Den?

Opossums don’t stay long in one place. They are nomadic and are constantly in search of food. At most, they spend about 3 days in a den before moving on.

Another reason for always being on the move is to prevent predators from catching them. A female opossum may stay a little longer in one place when she has babies to take care of.

Perhaps that’s why they don’t expend so much energy on building their own dens. They just take what’s available and make do for a couple of days.

Opossums keep to themselves and don’t interact with each other, so sharing the same nest is highly unlikely. The only time they seek out other opossums is when love is in the air: the mating season!

Even then, male opossums don’t stick around for very long, leaving the female opossum long before she gives birth. The only time opossums share the same nest is when joeys (baby opossums) share their mom’s fur-lined pouch.

On average, an opossum will give birth to 6-9 joeys. They will occupy their mother’s pouch for about two months. It sounds like a tight fit – no wonder they never want to share a nest when they grow up!

Should I Let Opossums Live Near My House?

Opossums May Help Clean Up Your Garden

If you find an opossum in your garden or somewhere around your house, it is probably best to leave it be. Despite their unfair reputation as nuisances, they are actually quite harmless and even docile as long as they don’t feel threatened.

Also unbeknownst to many, having an opossum in your yard or garden is actually beneficial. As omnivores, they will eat whatever is available, including much of the stuff you’d rather get rid of!

What scrumptious foodstuffs does your garden have? Opossums will happily dine on fallen, rotten fruit, bugs, and other pests that may harm your plants. They eat ticks and cockroaches too and for that reason alone it would be best to have opossums around!

Since opossums are transient animals, they are unlikely to overstay their welcome. They will enjoy the bounty of your garden, clean up the pests and spoiled vegetables and fruit and then go on their way.

People are not meant to coexist with any wild animal and the opossum is not an exception. While an opossum would be nice to have in your yard, it’s not quite the same if they are inside your house.

When looking for nesting materials opossums may do damage to wires, insulation foam, and air ducts. They will also go to the toilet in inappropriate corners of your attic or garage and leave you with a stinky house. It’s not ideal to have an opossum nest under the same roof.

The best thing to do is to allow a clear path for the opossum that leads outside. Chances are they are keen to be out in the wild where they can eat and live as nature intended.