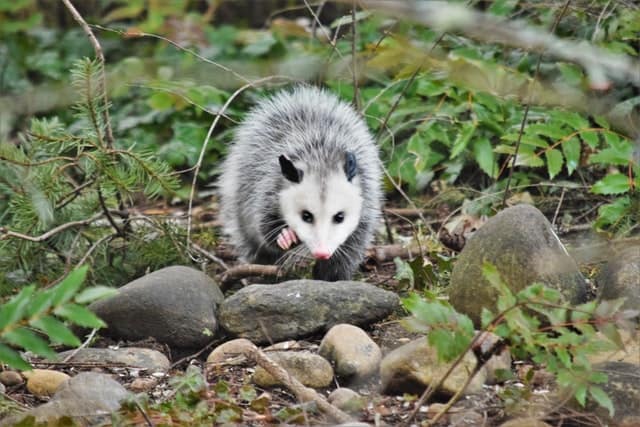 Opossums have an average lifespan of one to two years in the wild. Their life span is so short because they are generally preyed upon by larger mammals and have many diseases.

The predators and large mammals that prey on opossums are not exclusive to wild animals. Humans and domesticated animals like dogs and cats also pose a problem to the small opossum. Either through intentional harm or accidents, many humans distress the opossum.

The opossum is an interesting animal that many scientists believe has existed since the pre-historic era. The marsupial, who is at least seventy million years old, has remained unchanged and maintains the same genetics.

Lifespan of Opossum In The Wild

The average lifespan of the opossum is one to two years. According to the Opossum Society of the United States, large predators like wild mammals, pets, and humans are the main cause of the opossum’s short lifespan. Common predators of the opossum are wild canines and wild felines who prey on this animal.

Why Are Oppossum Lifespans So Short?

Despite their size and metabolic rate, opossums actually only have a lifespan of about 2-3 years in the wild. In captivity, their lifespan increases, but only by a small amount. Captive opossums live for about 4-5 years.

In the wild, opossums generally don’t survive very long due to the number of predators out there. By predators I mean literally anything, dogs, cars, diseases, snakes, and coyotes. Their personalities don’t seem to help them much here either because opossums tend to be very friendly, curious, and social. Basically, their survival instinct sucks! However, they seem to do everything else right.

Over the years, opossums have adapted easily to new territories, and surroundings, as well as to adapt their diet and food variety. They are what people call opportunistic hunters and are often found sifting through trash cans. Opossums even birth larger litters to increase survival chances.

So, what’s the deal with their short lifespans?

It seems that biologically after the animal has completed their breeding lifespan of roughly two years, their bodies just give up from there. Additionally, they are prone to a variety of parasites, leading to illness, disease, and most often death.

In captivity, opossums may be safe from external factors that cause death such as predators, harsh environmental conditions, and starvation. However, that does not seem to keep them alive much longer.

There are plenty of other factors that change and bring about new obstacles to opossums living the good life with humans.

Lifespan of Opossums In Captivity

Opossums in captivity often live longer than wild opossums. The average duration that an opossum in captivity lives is a little over six years if their owner properly cares for them. Being cared for properly means feeding them the right diet, giving them proper exercise, and tending to their needs accordingly.

Although six years sounds like a short time, this is a long time compared to the average one to two years they typically survive in the wild.

The main reason the wild opossum lives a short life is because of predation and external intervention. When living in captivity, they do not risk encountering dangerous predators. There is a chance they can receive important medical care when needed (although it can be difficult to find a specialized vet who can care for your pet opossum if that is the case).

These mammals are savvy, and they often play dead when a predator approaches them. Playing dead helps opossums avoid vicious predators like wild canines or pet dogs and cats. Since the opossum does not appear to be alive, these animals will lose interest in hunting their target.

It may even work on humans who will avoid combatting the opossum.

To evade these predators, an opossum will often play dead. For an opossum, this is typically known as “playing possum.” Playing possum is a colloquialism for the opossum’s involuntary reaction to playing dead when they feel threatened.

The larger size of the male opossum can influence their decreased survival rate compared to the female. While females can go unnoticed, the male stands out and gets eaten by predators. On the other hand, females have an easier time hiding because of their small size, which allows them to squeeze into tight places.

People sometimes refer to opossums as “living fossils” because they have been around for approximately seventy million years. According to the Tallahassee Democrat, scientists believe the genetics of the opossum has remained relatively unaltered since they first came about. Therefore, many people believe that studying the opossum gives a glimpse into the past.

Several identifying factors can help you determine an opossum’s age, such as their eyes, weight, and tail length.

A Baby Opossum Opens Its Eyes As It Ages

You can tell how old a juvenile opossum is by observing its eyes. If an opossum’s eyes are open, that means they are at least sixty to seventy days old. An opossum that is this old is no longer dependent on its mother.

If you notice a baby opossum is by themselves, they are likely in their “teen” years (or in this case, months). These teen years are the short time between being a newborn opossum and becoming an adult. They are still highly dependent on their mother. However, they no longer need their mother’s body heat to survive, and they are beginning to gain independence.

By six weeks old, the opossum develops whiskers and hair. The development of hair is noticeable, and it comes in very quickly.

Opossums Get Bigger The Older They Get

An opossum will grow bigger as they mature into adulthood. The appendages of the opossum will grow, such as their tails, legs, and ears. At first, the baby opossum weighs less than a gram. When the opossum finishes maturing, it will weigh between six and nine pounds, depending on the gender.