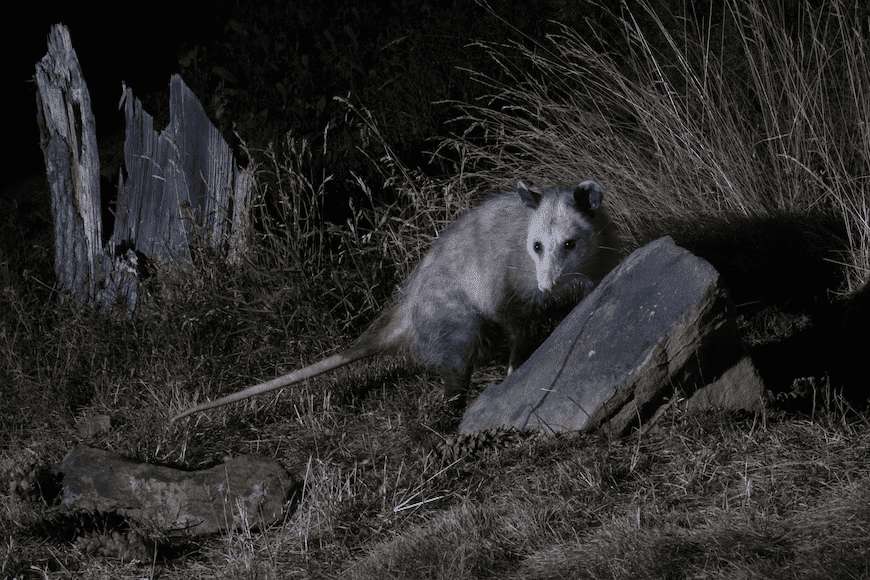 There are several species of opossums in the Americas, but the United States and Canada are home only to the Virginia opossum (scientific name Didelphis virginiana), sometimes called the North American Opossum.

Confusingly, they are commonly referred to as “possums,” which also happens to be the name of a completely different animal that lives in Australia!

Opossums are small to medium-sized floofy marsupials that can grow to the size of a house cat. How big is their poop, though? Floofmania gives you everything you need to know to identify and tell if you have a secret opossum tenant living on your property rent-free!

Opossum poop sometimes curls as the animal does its business, shaping it like a letter C, or occasionally bends. Generally, though, many people say that opossum poop looks similar to a medium-sized dog’s poop.

How Big Are Opossum Droppings?

Opossum poop is usually around 1-2 inches long and about 3/4 inches in diameter. They tend to taper off at the end and have smooth sides. You can generally find the species’ poop in two to three large piles instead of mounds of smaller-sized pieces.

What Color Is Opossum Poop?

Fresh opossum poop is brown but may be so dark it is almost black. It may also have whitish or yellowish tinges if it’s not very new because of mold growth.

Are There Visible Things Like Hair, Seeds, or Bones In Opossum Droppings?

Opossum poop does not generally have seeds and other visible things in it.

This is one way to tell you are looking at raccoon poop and not an opossum’s droppings: Raccoons typically do have seeds and other matter in their feces.

Feces on their own smell terrible, but opossum poop smells much worse because they pee on it too. This makes its smell a combination of something rotten mixed with ammonia, a chemical in opossum’s urine. Most people smell the poop before they see it!

Where Do Opossums Poop?

Opossums are rather shy and poop in a secluded area where they are sheltered on at least two sides.

They like to poop on piles of leaves or other fallen foliage. They also tend to poop right after eating or drinking, so you may find poop near your garbage can or near a water source such as your swimming pool.

Opossums are flexible, though. They are willing to poop in your attic or basement, too!

Do Opossums Poop In The Same Place Every Time?

Animals sometimes create something called a “latrine,” or someplace they designate as their official toilet area. An example of an animal that does this is raccoons, who tend to defecate and urinate in the same place each time.

The same is not true for opossums. Opossums do not create a latrine – they tend to relieve themselves anywhere, anytime.

Like this opossum that doesn’t shy away from doing number two in the middle of a tv show:

Do Opossums Poop Together?

Opossums are solitary creatures who only interact with others in their species during the breeding season. So, to answer the question: The opossum that lives alone poops alone.

Does An Opossum Poop While Playing Dead?

Opossums have a defense mechanism of “playing dead” when predators threaten them. They are not actually “playing,” though – they enter a state of shock and fall into a quasi-comatose state for anywhere between 40 minutes to 4 hours.

This is the origin of the idiom “playing possum,” which people say when you are “pretending to be dead” or are lying low for a while.

Some people have assumed the scent comes from the animal pooping out of stress – but the scent they encounter is the smell of fake death, not of feces.

Generally, dung is dirty, and you should never touch it.

However, opossum droppings may contain bacteria such as Salmonella and Leptospirosis. The species has also been found carrying Equine Protozoal Myoleoncephalitis, a bacteria that attacks the nervous system of horses.

If the dung has mold growing on it already, you must be even more careful: inhaling the fungal spores can affect your heart and lungs and possibly even enter your bloodstream.

While you can theoretically clean the droppings yourself, consider calling a local pest control specialist to deal with it instead and do so as soon as possible.

If left unchecked, opossums can stain your ceilings, floors, and walls with their urine and feces, creating breeding grounds for parasites and bacterial growth. They also bring in their scavenged food, leaving scraps in random places in your home to rot.

How Do I Stop Opossums From Pooping On My Property?

Opossums are cute – from a distance. You certainly don’t want these small mammals running around in your attic, leaving toxic droppings for you and your family to encounter!

Here are some suggestions for how to get opossums to stop pooping on your property:

What Other Animal’s Poop Might You Mistake For Opossum Poop?

Here is three animals’ poop you might mistake for an opossum: