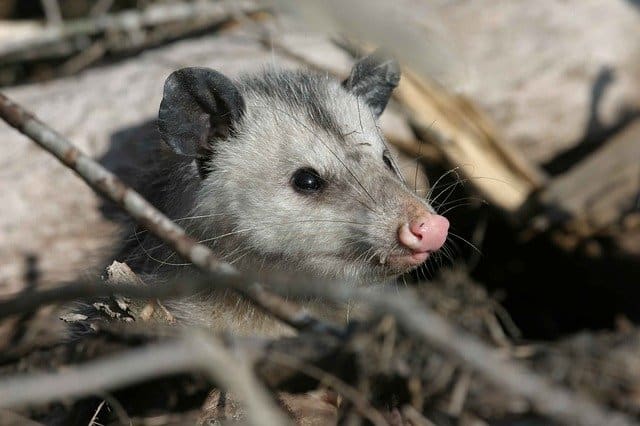 The American opossum is North America’s only native marsupial, which means they have a special pouch to carry babies. These nocturnal critters are solitary scavengers, and play a vital role in their habitat in pest management.

Opossums are usually quiet creatures, but make clicking sounds to communicate with mates and their young. Opossums also make noises when distressed or frightened. They use noises like hissing and growling as a defense mechanism against potential threats.

Believe it or not, opossums are generally considered to be very quiet animals.

Opossums are usually silent and this makes them hard to detect even when they’re active at night.

It is more common to hear opossum noises near wooded areas, which is the opossums’ natural habitat. Opossums are also at their noisiest during mating season. Opossums produce a symphony of clicks and snarls as they locate and compete for the chance to reproduce.

What Sounds Can an Opossum Make?

Depending on the circumstances, an opossum can make many different sounds. These sounds include aggressive sounds like hissing, screeching, and growling, as well as scavenging, sounds like rustling and snuffling.

Clicking is the primary way opossums communicate with each other. Opossums have an acute sense of hearing and use a variety of auditory signals to communicate.

Perhaps the most famous example of an opossum noise is the lack of noise! Opossums have long been considered one of the quieter backyard critters.

When the more aggressive growls and hisses do not deter predators, opossums take a quieter approach: they lie still and silent on the ground and “play dead” to attempt to fool the predator into thinking the opossum is dead. They can even emit a terrible odor to make it seem like they are stinky roadkill!

To briefly sum up, here’s a list of the noises opossums make:

Baby opossums (known as joeys) are helpless when born and spend the first two months of their lives in their mother’s marsupial pouch.

Once the babies are old enough to leave the pouch, joeys often make soft sneezing sound to communicate to their mother if she is not near.

While baby opossums are also known for making a chirping sound similar to the sound of bird tweets, it is more common to hear a soft “choo choo” sound that is a bit like sneezing.

To hear a who orchestra of these strange opossum sneezes, watch the video below!

A threatened opossum will usually emit a low, throaty growl as the first warning to a potential predator.  Depending on how frightened, an opossum may also bare their teeth or use other noises to warn off threats.

Opossums Scream and Screech When Angry or Intimidated

Opossums will screech loudly when intimidated. These piercingly loud screams are heard most often from male opossums during breeding or territory disputes. Frightened opossums may also screech at predators in an attempt to discourage an attack.

And then there are pet opossums that just don’t like bath time. To hear what that sounds like, check out this short video.

Baby possums, or joeys, are tiny at birth, about the size of a honeybee. These little fellas are known for making soft sneezing noises when separated from their mothers. The young opossums will use these sneezes as a way to call out to their mothers. Their mother answers with clicking noises.

An opossum will generally hiss to appear more threatening to predators such as large dogs, coyotes, or foxes. To appear even more intimidating, an opossum may open their mouth wide, and bare over fifty teeth, more than any other mammal in North America!

The opossum in the video below almost sounds like a snake!

Clicking sounds are a primary method of communication among opossums.

Mother opossums answer to their joeys “sneezes” with clicking noises. Males make similar clicking sounds when seeking out potential moms for their offspring.

The clicking sound is similar to the same sound humans can make when they click their tongues against their teeth. Opossums are solitary and do not bond as a pair, so a reliable way to communicate with potential mates is important during breeding seasons.

Despite being quiet most of the time, opossums do have a pretty wide vocabulary of sounds.

Opossums are becoming more and more popular to keep as pets, and this might lead some people to assume that they’re like cats and that they purr.

Opossums do not purr. Opossums are often mistaken for cats, and while they do hiss and growl like domestic cats, they are not related to cats and do not purr as an affectionate sound. They don’t meow either!

When opossums are searching for a mate, they make loud clicking noises. Opossums are solitary and do not bond as a pair. The breeding season begins in January and may continue to mid-November, after which males will return to a more nomadic lifestyle.

During mating season, male opossums often follow, chase, and circle females while clicking. Males may also make sounds like growling, hissing, and shrill screeching as they try to compete with other males for females.

Male and female opossums make the same sounds both in their lives in general, but also during mating season, namely by signaling to each other with clicking sounds.

Both males and females follow the sounds of other opossum clicks to find a mate. Piercing screams are often heard when male opossums compete for mates during the breeding season.

The main difference in male and female opossum vocalization is probably that the female opossum makes clicking sounds a lot more often because she also uses these noises to communicate with her offspring.

What Noises Do Opossums Make When Fighting?

When fighting predators, an opossum is most likely to hiss and growl. The level of perceived threat greatly impacts how an opossum reacts in the face of violence.

Opossums are famous for their ability to “play dead” to confuse predators. Before “playing dead” a cornered opossum may also bare teeth, urinate, and emit a foul odor (like a skunk).

When Am I Most Likely to Hear Opossum Noises?

Since they are active after dark, opossums are most likely to make sounds at night.

Since opossums are more vocal during their breeding season, and when they have young joys, you’re also more likely to hear their sounds specifically during these periods, from the end of winter, when the breeding season starts, and until the end of summer, when the opossum joeys start to become more independent of their mothers.

Opossums can live in a variety of habitats but are most comfortable burrowed in a dry shelter, such as hollow logs or trees. With careful listening, it may be possible to hear mother possums clicking to their joeys, or a male opossum searching for a mate.

Foraging opossums may also make rustling sounds, which can easily be mistaken for other wildlife like raccoons.

What Noises Will a Frightened Opossum Make?

A distressed opossum might growl loudly or snort. This initial sound serves as a warning to potential predators. If the warning does not work and the opossum still feels threatened, opossums will hiss loudly.

They may even emit an ear-splitting screech! In situations where they feel threatened, opossums may even drool to make it look like they have rabies to ward off enemies.

Opossums have adapted to live in a variety of habitats and are often right at home in the average backyard in most areas of North America. Because opossums are so quiet, it can be easy to mistake their sounds for other backyard critters.

How Do Opossum Mothers Communicate With Their Babies?

Opossum mothers use a distinctive clicking sound to attract the attention of their young. Opossums mothers use clicks that are in a specific frequency to communicate with their joeys. Opossum mothers also use lip-smacking, and bird-like sounds to locate or reassure their tiny babies, if needed, but many joeys stay tucked away in the mother’s belly pouch.

Just like the offspring of other marsupials (like kangaroos), baby opossums find milk, warmth, and safety in the pouch. Opossum mothers even have special scent glands inside the pouch that helps the underdeveloped joeys find their way to the pouch immediately after birth.

What Sounds Do Baby Opossums Make?

Joeys may hiss at their siblings but as they are so tiny at birth and early life, they are much quieter when compared to adult opossums. Joeys are not often left alone by their mothers, as they can always hitch a ride inside their mother’s pouch. Female opossums have up to thirteen nipples and can have large litters of joeys.

What Sounds Would I Hear if An Opossum Got Into My Home?

Opossums are very quiet animals, so it can take a while to determine if an opossum has taken up residence on your property.

Rustling or persistent scratching in tucked-away places, such as attics, garages, porches, and sheds can be an indication that an opossum family has made a den. The joeys distinctive “choo-choo” call to their mothers and clicking are also noices one might hear if sharing their home with a family of opossums.

While the opossum is typically a silent animal, they make many sounds given the right circumstances. Clicking is an important sound that opossums make; it plays a vital role in finding mates and communicating with young joeys.

Opossums make a wide variety of sounds when threatened or faced with a predator; hissing and growling serve as primary warnings, while silently “playing dead” is used as a last resort by an endangered opossum. Male opossums also screech, especially during the competition that comes during mating season.